In honor of this weeks big season finale’s I want to share with you a couple cool experiences I had at Wondercon. In case I hadn’t told you all this before, Saturday was jammed packed with awesomeness and for this weeks Comic Book Crossover I want to tell you about 2 experiences that directly crossed over into 2 of my favorite TV shows for the 2013-2014 season.

First up is the Bill Paxton signing for Edge of Tomorrow. What an awesome guy, his interaction with the fans was amazing. This wasn’t just an assembly line like some signings, he took the time with each fan. We spoke about his role on SHIELD and he did give away a spoiler that I kept to myself. I don’t think he meant to but he said “…. and i only have 4 episodes left.” I guess that could have meant for the season but I took it as forever. After that I gave him a thank you and a  Hail Hydra, he gave me a Hail Hydra back before I was on my way. It was a quick signing but one of the cooler ones for sure.  He also signed my poster and included “Game over man!” What a classic line. 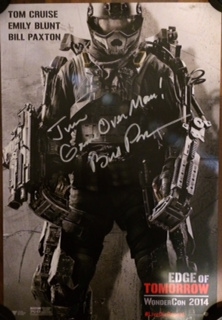 At the end of the day Saturday I had the opportunity to talk with and get a book signed by showrunners Marc Guggenheim and Andrew Kreisberg from the show Arrow. This season Arrow has been top notch, one of the best seasons of comic book/tv storytelling I’ve seen in a long time. The care that these guys take in crafting a long term story arch is amazing. So after their panel on running a television show they stuck around and signed some stuff while answering some questions. I had them sign my Arrow #1 that they wrote as a give away for DC a little over a year ago. This comic is one of those situations where the comic becomes the TV show then the TV show becomes the comic. It can be interesting how subtle changes are made to the comic counterpart once the show/movie becomes a hit. While talking to Marc I tried to get some info on the possible Justice League tie-in we all hope happens and he made a good point. “The fans will probably know before I do.” Isn’t that always the case???? 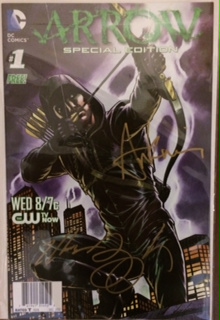 Who’s ready for next seasons TV with all the cool comic book shows popping up???? I
can’t wait. 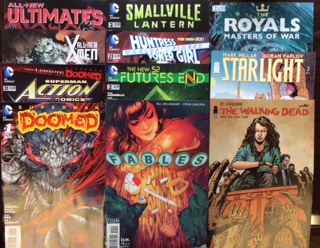 There were a lot of books that came out this week. I can’t believe how much money I keep spending, I’ve got to slow it down. Anyway of this stack of books there are 3 that really stand out, first up is Doomed. This book kicks off the introduction of Doomsday into the new 52 DC  universe. I’m sure you all remember how nearly 20 years ago Doomsday was the monster that killed Superman. Everyone had a copy of that book, even Susan. I’ve got a few in the basement somewhere. Hopefully if they go this route and end up killing Superman again we don’t have any more of the showy nonsense. Especially since part 1 of this storyline was $5. I’m not feeling that. 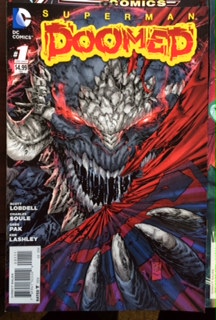 Next up is Future’s End, this book made the top picks for last week and does so again this week. I hope they handle this story well enough to make Batman Beyond an interesting part of this new DC timeline. I love the cartoon, love the character and really want to see more of Terry McGinnis in his future tech Batman costume. 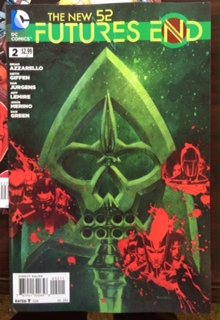 Lastly is of course Walking Dead. You have to all be getting tired of hearing about it so all I’m going to say is it’s now 2 years later. That’s right after All Out War the jumped the book 2 years into the future. It’s a whole new ballgame. I loved it and can’t wait for more. 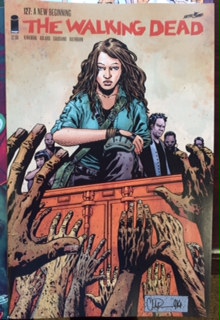 Well that’s it for this week. Have a good weekend and get out there and buy some comics.
Jim