Comikaze is now, “Stan Lee’s Los Angeles Comic Con” the con has rebranded itself to celebrate the City of Angels and being a pop culture mecca. I’m sure I’m going to call it Comikaze for years to come, but there is an official new name. 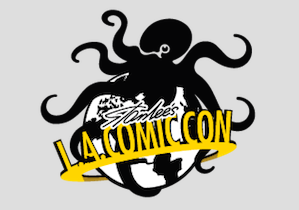 Check out the full rundown on the change below!

“We’re proud to announce that on September 27, 2016, in front of the Los Angeles City Council, Stan Lee and the rest of the Comikaze team announced that Stan Lee’s Comikaze Expo will now be rebranded as Stan Lee’s Los Angeles Comic Con. The reason for the change is to underscore the convention’s primary objective of honoring Los Angeles as a mecca for the creation and production of today’s most celebrated pop culture entertainment – and to salute the many L.A.-based professionals involved in the creation of the films, television, comic books, and videogames that energize the sci-fi and pop culture entertainment categories.

We’re still the same show that you know and love, and we even still refer to ourselves as ‘Comikaze’, but if it makes you feel better you can call us the Convention Formerly Known as Comikaze Expo.”