When it comes to national tragedies, there are none that have come close to 9/11 in my lifetime. I remember when it happened, I got a phone call from my friend who said, “Turn on the TV, the world is ending.”

And there I sat for the rest of the day, glued to what was happening.

Los Angeles was a ghost town. My birthday is 9/12 so you can imagine what that birthday was like. I headed out to eat with some friends and there was no one in the restaurant, completely empty. It’s always interesting to me, how our entire country can go through something and each and every experience is so different.

A new film is hitting theaters on 9/8 chronicling the events of 9/11 from the point of view of five people trapped in an elevator on that fateful day.

It stars Charlie Sheen, Whoopi Goldberg and Gina Gershon. I have to tell you, it’s a really good film. I was able to see a select advance screening and it’s one of Charlie Sheen’s best dramatic roles. He really does a fantastic job. I was really impressed. The film as a whole was so well done and all the performances were so subtle and so true to life. I wasn’t expecting it to be so good and so powerful

Check out more info below:

In the World Trade Center, a billionaire sits in his attorney’s office awaiting a divorce hearing against his wife. In a west side apartment, a bike messenger kisses his 5-year old daughter and sings her “Happy Birthday” before leaving for work. A maintenance man gets dispatched to help a tenant with his lock. In an upper east side apartment, a young model musters the courage to break up with her sugar daddy. As random as random can be, these individuals step into a crowded World Trade Center elevator.

Wrapped up in their own world, they all ride silently hearing only the sound of the elevator giving notice of each floor. When the elevator stops on the 34th floor, it empties leaving only these five behind. Moments later … their world changes as the collision of a jet into the North Tower incapacitates the elevator.

With no understanding of what has happened and is happening around them, these fives are forced to band together and fight against all odds to escape from the impending horrific collapse. During these critical minutes, a story of courage, faith, and the will to live unfolds.

Check out this awesome blog app with facts about 9/11 thanks to Tuesday’s Children!

Thanks to the awesome folks behind the 9/11 movie, we have an awesome Gift pack to giveaway! 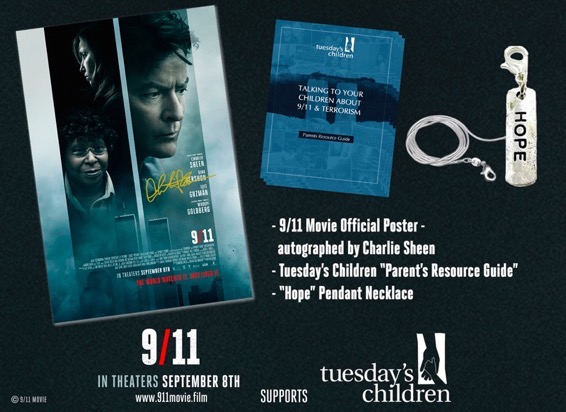