Grab your silver bullets and wooden stakes because it’s the Beasts of February on COMET!

Full moons can be frightening and this month on COMET TV there are enough beasties to send a shiver down your spine and make you smile at the same time!

Whether you love the 1980’s classics Teen Wolf and Teen Wolf Too or prefer your beasts a little more out of this world with Species and Strange Invaders, COMET TV has you covered!

COMET, the newest & obviously coolest Sci-Fi Network has been showing the best in fun cult classic films and television shows! If you haven’t checked it out, you’re missing all the fun!

Plus, thanks to the awesome folks at COMET TV we have a killer prize pack to giveaway!

Two Limited Edition COMET TV Pint Glasses – Two glasses will be chosen out of four Limited Edition designs. If you can’t beat your inner beast, having a drink will soothe even the darkest soul!

One Heart Splatter Toy – There’s nothing a beast wants more than the heart of their victims, now you can beat them to the punch, just don’t squeeze too hard!

Fire Ants Hard Candy – The beasts have invaded! But now you can fight back and have fresh breathe at the same time!

Oozing Candy Eye Balls – Perfect for the beast in your house, these candy eye balls with an oozing gushing center will have your pack fighting for more!

Gummie Tarantulas – EEEK! Don’t be scared these Tarantulas aren’t coming to get YOU… You’re coming to get THEM! Unleash your inner beast and take a bite out of these former frightening foes. In delicious cherry and lime! 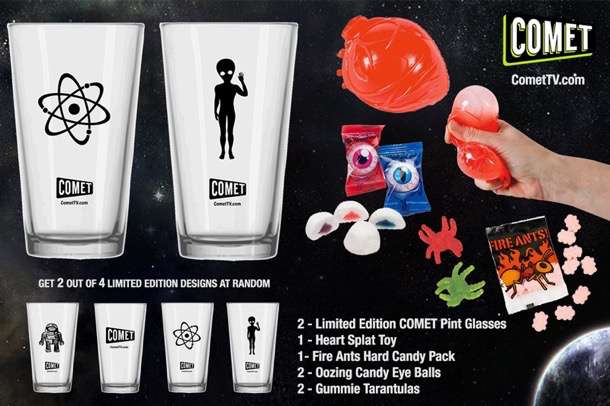 COMET has an incredible array of movies that you simply can’t get with a subscription to streaming platforms like Netflix, Amazon, or Hulu. From wild adventures on Mars to critically acclaimed classics, COMET is the ultimate home of sci-fi and horror… and it’s all totally free, no subscriptions needed.

COMET TV has all the spine tingling beasts you can sink your teeth into this February!

From the classic adolescent werewolf trials and tribulations of Teen Wolf to the outer world invasion of Species, catch any and all beasts airing this month on CometTV.com

Available on television digi-networks and online at CometTV.com, COMET offers something for everyone and has an incredible array of movies that you simply can’t get with a subscription to streaming platforms like Netflix, Amazon, or Hulu.

make sure and check out COMET TV!