For the month of April we’re heading into space to celebrate the fact that Comet TV has a bunch of episodes of MST3K heading back to Comet TV!

This is the perfect time for everyone to introduce Comet TV to a friend, so this giveaway will have a glass for you and one to share with a best bud, parent or whoever you want to give it to.

Have a drink, watch some MST3K and give your friend a glass to take home!

The Pack will include:

2 limited Edition MST3K Pint Glasses: Share with a bud, or keep them both, yes we’ll judge you but in this day and age does it matter? You can only get these glasses in this pack!

A Moon stress ball: When your stress gets out of this world, just squeeze this stress ball to get it all out… GET IT OUT!

A custom MST3K flyer: Designed for the discriminating fans of MST3K. 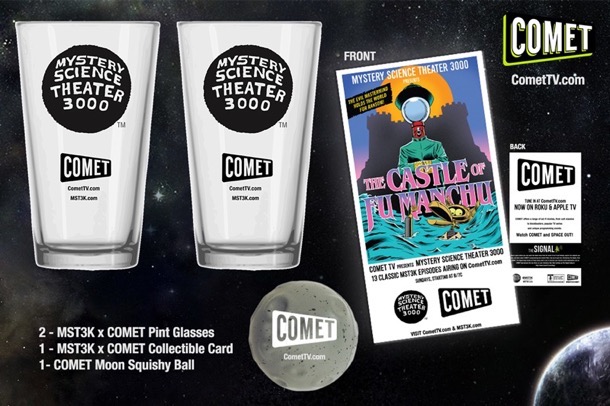 Take a look at some of the other awesome programming on Comet TV this month!

On Earth Day, COMET is airing a movie marathon that’s perfectly suited for a planet in peril. But this time, it’s not Earth that’s in trouble — it’s us. Saturday April 22 at 12/11c, we’re bringing you four films where the Earth strikes back.

Stargate SG-1 is back on COMET!Your favorite gate-hopping action series returns with back-to-back episodes Monday through Thursday at 8/7C, with encores of both episodes airing at 10/9C. That’s two chances, four times a week, to catch Jack O’Neill and his squad on their adventures across the galaxy. Indeed.