Disney movies kicked off New York Comic Con (NYCC) with a panel featuring Big Hero 6 and the first look at the mysterious and highly anticipated new film, Tomorrowland. Despite plane delays and a scamming NY cab driver, I just barely made the panel. Good thing since we were in for a whole bunch of treats AND I have some goodies to share!!

The panel began with Big Hero 6, an animated film based on a Marvel comic book. The story is focused on a young boy, Hiro Hamada, who makes friends with a robot named Baymax. They team up with Hiro’s friends to form a group of high-tech heroes. 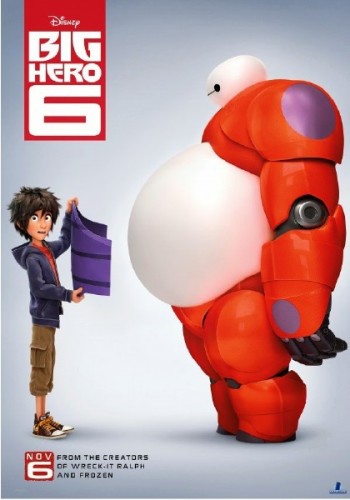 Producer Ron Conli, directors Don Hall and Chris Williams along with the voice stars Scott Adsit (Baymax), Jamie Chung (Go Go Tomago), TJ Miller (Fred) and Genesis Rodriguez (Honey Lemon) all came to talk about the movie. The cast had been working on this movie for the past 18 months and got its first glimpse of the movie the week before. 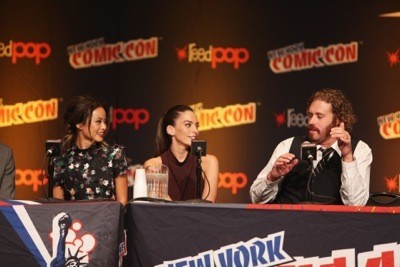 Scott Adsit is a big comic con attendee and he’s thrilled to be in the Main Stage at NYCC, let alone on the stage! (He hasn’t been able to brave the insane lines before…)

The panel showed a bunch of clips including a madcap, busy lab which is the first time we meet Baymax, a big, puffy EMT-sort of character. Other clips expanded on scenes already scene in the various trailers. 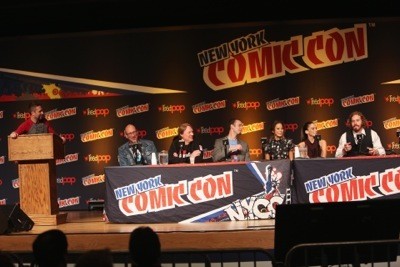 Before the cast and crew of Big Hero 6 departed, we got a visit from Baymax. Sort of. The screens gave us “Baymax’s viewpoint” and Baymax wanted to give some medical attention to a cosplayer in the audience with an axe in his head. Very cute and nicely done live!

Brad and Damon took to the stage to talk about the inception of the movie. The two of them met when Damon did some script polishing for Mission Impossible 4: Ghost Protocol. They revealed the teaser poster for the film which is the close up of a Tomorrowland pin. 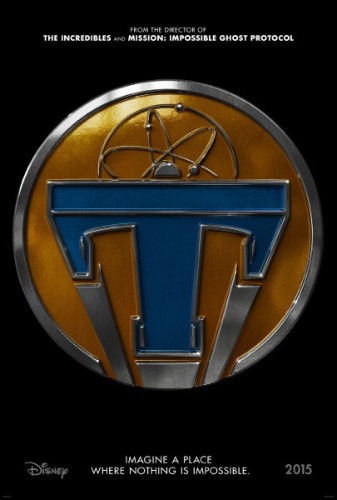 Brad talked about seeing Pirates of the Caribbean’s impressive transition from Disneyland ride to movie. So Brad looked to the whole Tomorrowland section of Disneyland for inspiration. His team did extensive research into the theme park to understand its history and previous rides, etc…

To add more layers, Brad also talked about the power of the mystery box – before it’s open, there are infinite possibilities for what’s inside. With the mystery box a big part of the approach to the movie, you can bet that any information about this film is going to be very deliberate and not give away the whole show! 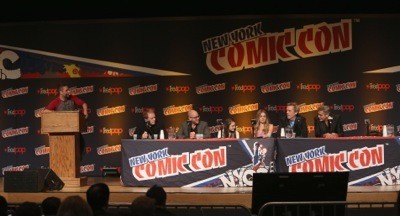 Next, we got our first look at the trailer which features Britt Robertson (Under the Dome, Secret Circle, Scream 4) as Casey Newton, a high schooler who finds a mysterious pin. When she touches it, she sees a glimpse of a strange land. And that’s pretty much all we know from the trailer!

Brad and Damon were joined by cast members Brit, young Raffey Cassidy and Hugh Laurie. Hugh gets a thunderous ovation from the crowd which surprises him, and he takes a second to formerly break a leg to the crowd.

And then a rather cryptic Q and A begins because the poor actors can’t give away anything with Brad and Damon sitting right there. They talk about their reaction to the film and, well, Hugh is funny and a quote-machine: “I’m not an easily uplifted person…(dramatic pause), because I’m English, but I was uplifted…This was mind boggling and my mind was boggled.” 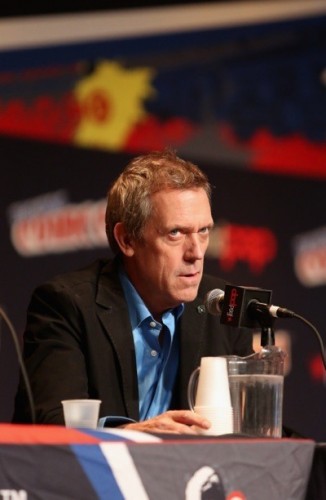 Brad adds that there is something Close Encounters-esque to the film since the characters are pursing something they saw in a vision.

Brit talks about working with George Clooney who would play music on set so they would break into dance parties. Hugh points out that George never played music for him. He goes on to say that George isn’t everything everyone makes him out to be: “…he drinks, shouts, lies about his age…he must be 75 if he’s a day…” and as Hugh says this, George Clooney steps onto the stage!

Yes, George Clooney is in the house!! (TV doctors unite!!) 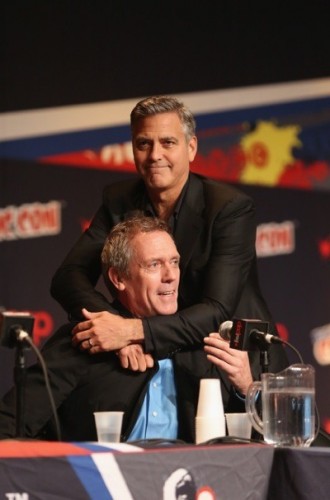 George settles in and remarks that “it does not escape me that I am spending my honeymoon at comic con.” This is his first trip to comic con (San Diego or NY). “Since my Batman, I was disinvited from comic con for 20 years.”

He got to meet Adam West back stage and they got to fist bump. And then George “just apologized to him…sorry about the nipples,” referring to his infamous batsuit. 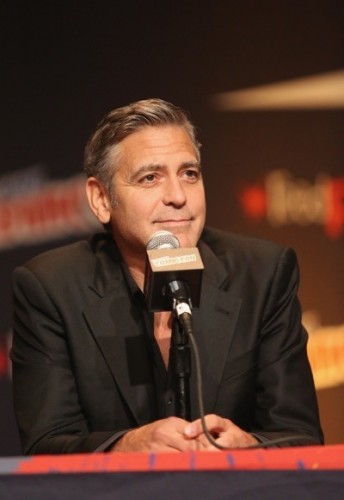 George also says he watched the teaser from back stage and asks Brad, “what the hell was that?” George wants something more substantial and, well, featuring him, so we get to see an actual SCENE from Tomorrowland!

Casey is outside a lonely, shabby house. She’s trying to talk to Frank Walker (George Clooney) who basically shoo’s her away. She manages to get inside, but now she’s lead her pursuers to Frank who’s been trying to stay off the grid. The bad guys trying to get in and Frank turns on his defense system which turns the house into a high tech Home Alone. Lots of action, but in a fun way!

With that, the panel closes, but not before we get a few gifts from Disney! We get a chapter excerpt from the upcoming novel and we also get a Tomorrowland pin!!! The same pin that gives Casey flashes of that otherworld in the film!! 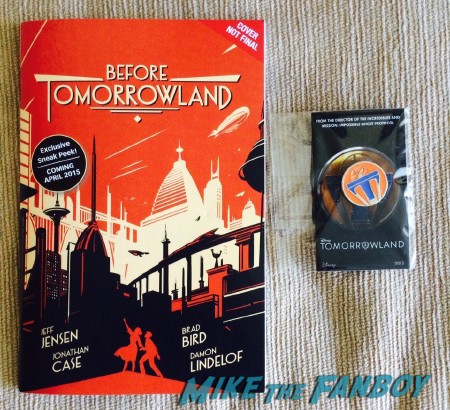 And guess what? I snagged an extra set to give out to a deserving reader!! Yes, you can take home both of these exclusive and highly collectable items! Grab one of these awesome pins home and see if you can connect to George Clooney! 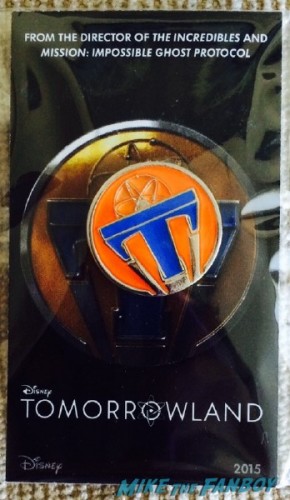 All you have to do is comment below on what your favorite Disneyland or Disney World ride is and fill out the entry form below! The contest begins today and ends on November 26th. It’s open to US residents only. Tweet daily if you want to add more entries!