We are the weirdos, mister.
Nancy, The Craft

OMG! How much do we all love The Craft? I mean, it’s one of my favorite films of all time! Besides having one of the best casts in film history, it’s scary, creepy and How about those weirdos?

COMET TV, who we all love here at MTF, is celebrating The Craft and their entire January lineup which is stellar!

There are also Edgar Allan Poe double features all month with tantalizing and terrifying tales from one of the grand masters of horror. As The Raven says, “Nevermore!”

Check out the schedule here and some of the highlights below!

Edgar Allan Poe DOUBLE FEATURES
Need to warm up on the cold Winter Wednesdays? Look no further than COMET’s brand new 2-hour block of Edgar Allan Poe programming. Each Wednesday evening at 6P/5C, catch the Tomahawk Man’s most beloved creations, including The Raven and Tales of Terror.

Airing weekdays at 4P/3C throughout January, check schedule at CometTV.com

Now… Onto the giveaway! 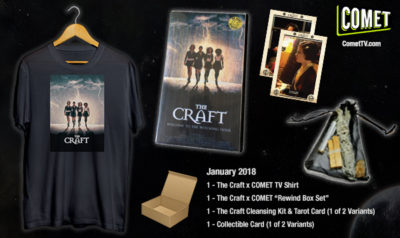 The Comet TV January Pack has:

1 – Limited Edition The Craft COMET TV T-shirt: One of my favorite films of all time! This The Craft exclusive T-Shirt features all four witchy guardians of the watchtower on the front and a quote from the film on the back! Welcome to the Witching Hour!

1 – The Craft Exclusive COMET TV Clamshell Box: Talk about retro goodness! This The Craft exclusive clamshell box features exclusive throwback artwork and will immediately take you back to the days of waiting in line for new release movies at the video store!

1- The Craft “Witching Hour Cleansing” Kit: Earth, Wind, Water, Fire! This kit will bring a little sage, crystal and spell scroll into your life. Perfect for getting in touch with your inner earth goddess!

2 – Exclusive The Craft COMET TV Tarot Cards : While you may not be able to tell your future with these two cards, they are exclusive to this set and feature The Craft artwork. The best thing to celebrate the cult classic film arriving on COMET TV this month!