I love film movement, they have released some of the best and most classic television shows and films over the past couple years.
Now, They’ve released The Ealing Studios Comedy Collection which is an awesome collection featuring classics from the golden age of UK cinema. You can check it out on Amazon here!
Check out the info below and then enter to win a set for yourself!
THIS NOVEMBER, FILM MOVEMENT CLASSICS OPENS THE VAULTS FOR A COLLECTOR’S SET FEATURING FOUR VEDDY BRITISH COMEDIES FROM THE U.K.’S GOLDEN AGE OF CINEMA,
ALL FEATURING STUNNING HD RESTORATIONS
EALING STUDIOS COMEDY COLLECTION
WHISKY GALORE! (1948)
PASSPORT TO PIMLICO (1949)
THE TITFIELD THUNDERBOLT (1953)
THE MAGGIE (1954) 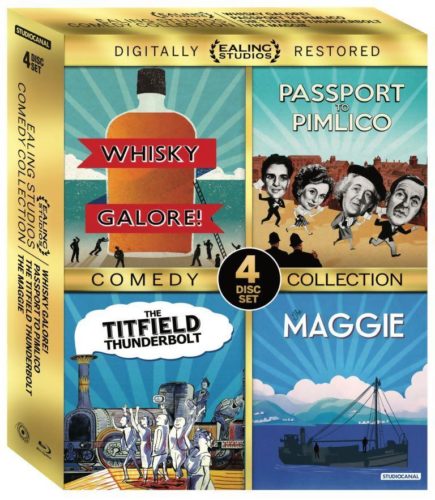 Released for the First Time Ever as a Blu-ray Set in North America,
This 4-Disc Collection is Loaded with Bonus Features Including Audio Commentary, Numerous Featurettes, Interviews, Collectible Booklets Featuring Exclusive Essays and More!
SYNOPSIS
In the 1940s and 50s, the U.K.’s Ealing Studios was the birthplace of the most delectable crop of movies to decorate postwar cinemas, a group of veddy British comedies that spoke to moviegoers around the globe. Their output not only helped define what was arguably the golden age of British cinema but also introduced audiences to beloved legends such as Alec Guinness, Stanley Holloway, Hugh Griffith, Margaret Rutherford, as well as fostered the emergence of talented directors such as Alexander Mackendrick (The Ladykillers, The Man in the White Suit) and Charles Crichton (A Fish Called Wanda, The Lavender Hill Mob). 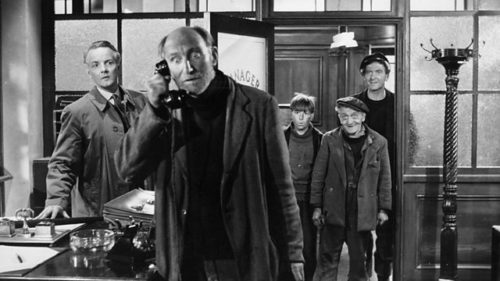 THE EALING STUDIOS COMEDY COLLECTION brings together four of Ealing Studios’ greatest and most classic comedies, all newly remastered from pristine vault materials in stunning HD: Alexander Mackendrick’s WHISKY GALORE! & THE MAGGIE, PASSPORT TO PIMLICO and THE TITFIELD THUNDERBOLT. Never before available as a Blu-ray collection in North America, the set will also be released on DVD, priced to add to every home entertainment collection at $69.95srp and $39.95srp respectively.
WHISKY GALORE! (1948)
Named one of the BFI’s Best British Films of the 20th Century and shot entirely on location, Mackendrick’s directorial debut WHISKY GALORE!, inspired by a true story, is a “tight little comedy of pure gold” (Time Magazine) about a Scottish island deprived of its most essential libation. It is 1943 and the tiny Hebridean island of Todday is plunged into the depths of despair. Spirits are low – for Todday is without whisky! Then one night during heavy fog, a freighter runs aground which happens to hold a cargo of 50,000 cases of whisky bound for America. Soon a battle of wits ensues between the local Home Guard commander (Basil Radford) and the islanders as both attempt to seize the salvaged treasure. 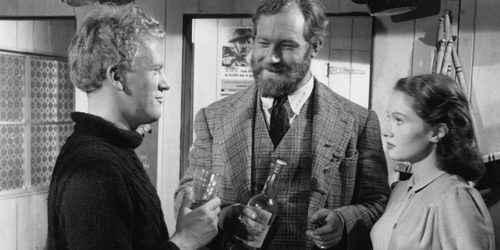 PASSPORT TO PIMLICO (1949)
During the worst heat wave in years, the sleepy district of Pimlico dozes…at least until London’s last unexploded WWII-era bomb goes off with a deafening roar, flinging its citizens headlong into a fantastic adventure. Directed by Henry Cornelius (The Galloping Major) and written by the talented Academy Award® Winner T.E.B. Clarke (The Lavender Hill Mob, Barnacle Bill), the whimsically charming PASSPORT TO PIMLICO has been hailed by Time Out as “perhaps the most Ealingish of the Ealing comedies” and was nominated for both an Academy Award® for Best Writing, Story & Screenplay and a BAFTA Award.
Investigating the crater caused by the explosion, Arthur Pemberton and his daughter Shirley unearth a buried cellar containing both fabulous riches and an unknown 15th Century royal charter from King Edward IV that decrees that Pimlico can be recognized in perpetuity as Burgundian soil. Since the charter has never been rescinded, Pimlico is now legally the long-lost Duchy of Burgundy, and therefore no longer subject to British law, including postwar rationing and pub closure hours. The locals, quick to see the opportunities, do their best to take full advantage of the situation, while the British government push back with all the authority they can muster in this classic starring comedy stalwarts including Stanley Holloway, Hermione Baddeley, Margaret Rutherford and Paul Dupuis.
THE TITFIELD THUNDERBOLT (1953)
A comical and delightful tale of community spirit, written by celebrated Ealing regular T.E.B. Clarke and directed by Charles Crichton, 1953’s THE TITFIELD THUNDERBOLT tells the story of the inhabitants of the tiny village of Titfield, who endeavor to prove that their single-track railway is a vital form of transportation. After British Railways announce the closure of the Titfield to Mallingford branch line, a group of local residents make a bid to run it themselves, backed by a wealthy member of the community. Unfortunately, this puts them into direct competition with Crump and Pearce, two unsavory characters who own the local bus company who’ve introduced a brand new single-decker bus to Titfield and are determined to cease the running of the train by means fair or foul. Starring Ealing regulars including Stanley Holloway, Naunton Wayne, George Relp, John Gregson and Hugh Griffith.
THE MAGGIE (1954)
In THE MAGGIE, nominated for three BAFTA Awards, the aging vessel named “Maggie” is one of the fifty-odd puffer boats which chug among the Western Isles of Scotland. The boat  is destined for the scrap yard unless her skipper, MacTaggart (Alex Mackenzie), can get her repaired. This seems a forlorn hope until he concocts a scheme for the humble “Maggie” and her crew of four to be entrusted to transport the valuable cargo of wealthy American industrialist Calvin B. Marshall (Paul Douglas). Director Mackendrick again returned to his Scottish roots for this film, described by the Radio Times as a “cross between Whisky Galore! and The Titfield Thunderbolt.
WHISKY GALORE BONUS FEATURES
PASSPORT TO PIMLICO BONUS FEATURES
THE TITFIELD THUNDERBOLT BONUS FEATURES 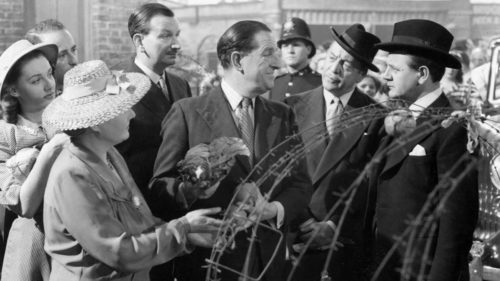