Thanks to the fine folks at Warner Bros, we have a copy of LEGO: DC Comics Super Heroes: Justice League vs. Bizarro League to giveaway to one lucky reader!

Can we get a woo to the woo hoo?

Batman has joined the newly formed Justice League in order to keep tabs on Superman, a mistrust that is complicated by Superman’s clumsy – but well-meaning – clone, Bizarro. Bizarro’s creation of the Bizarro League has caused confusion amongst the world’s greatest Super Heroes, but an even greater and mysterious threat may force the Justice League and Bizarro League to band together to defeat evil.

First check out the awesome app and put in your name to get your bizarro alter ego!

• Jen-Crush-Zarro-Mecca! Type in your name to reveal your Bizarro alter-ego – If you don’t like your name, press the refresh button or try again!
• Ask your readers to share their name from the app using the Twitter & Facebook share buttons – all shares will include a link back to your blog! 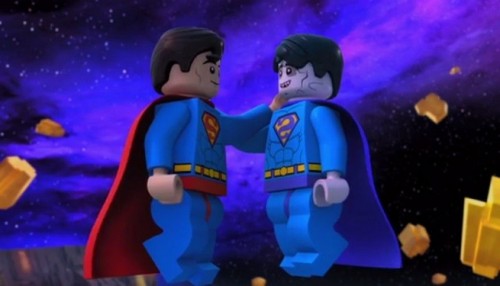