For those of you who don’t know, Elmore Leonard is the man who wrote the novels that Get Shorty, Jackie Brown, Out of Sight, etc…

Check out the trailer for Life of Crime on this awesome video player!

When a pair of low-level criminals kidnap the wife of a corrupt real-estate developer, they get both more and less than they bargained for in Life of Crime, a dark caper comedy based on legendary author Elmore Leonard’s novel The Switch. Starring Jennifer Aniston, John Hawkes, yasiin bey, Mark Boone Junior, Isla Fisher, Will Forte and Tim Robbins, Life of Crime is packed with the outrageously eccentric characters, black comedy and unexpected twists that earned Leonard a reputation as one of America’s sharpest and funniest crime writers.
Mickey Dawson (Jennifer Aniston), the wife of crooked real-estate developer Frank Dawson (Tim Robbins), is kidnapped by two common criminals (yasiin bey and Jon Hawkes), who intend to hold her for a $1 million ransom and extort her husband with inside information about his illegal business dealings. But Frank, who is holed up in the Bahamas with his mistress, decides he’d rather not get his wife back, setting off a sequence of double-crosses and plot twists that could only come from the mind of master storyteller Elmore Leonard.

Now that you’re interested in the film, why not enter to win a $15.00 Fandango gift card so you can go to the theater and check it out for yourself!

Enter below and make sure to check out Life of Crime, the new caper comedy from legendary author Elmore Leonard starring Jennifer Aniston, Tim Robbins, Will Forte and Isla Fisher is coming to theaters, on demand and iTunes August 29th! 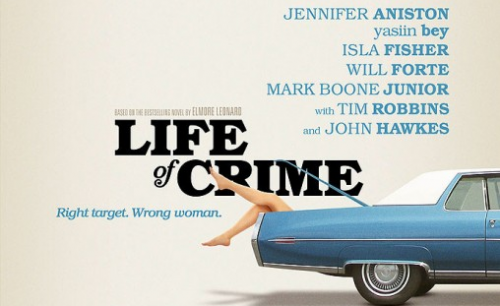