**“Warner Bros. provided me with a Blu-ray to facilitate this post. The opinions I share are my own.”**

It’s an adorable film that the whole family will love. Sophia Lillis is great in the title role and it’s a perfect film that will really appeal to fans of the original series and books. 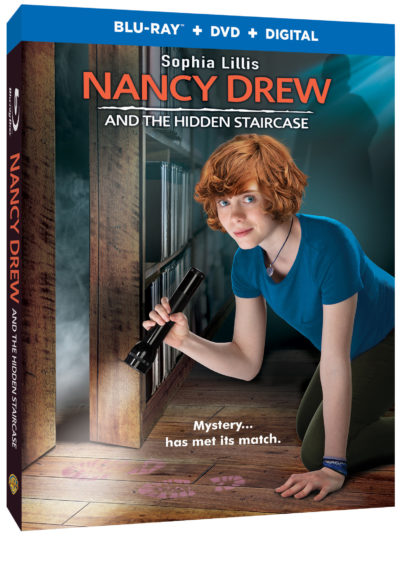 If you want to check the film out for yourself, you are in luck because thanks to the film peeps at Warner Media we have a copy to giveaway on Blu-ray!

The iconic mystery solving teenager from the classic Nancy Drew books is back with an all-new feature length film that will keep you guessing until the very end! Warner Bros. Home Entertainment will release Nancy Drew And The Hidden Staircase on Digital starting March 26, 2019 and Blu-ray™ Combo Pack & DVD on April 2, 2019. Executive Produced by Ellen DeGeneres, the film stars Sophia Lillis (IT and “Sharp Objects”), Sam Trammell (“True Blood” and “This is Us”), and Linda Lavin (“The Good Wife” and“Alice”) and follows Nancy Drew in her new town, making new friends and on a mission to solve the case! The film carries a suggested retail price of $19.99 for the Digital, $19.98 for the DVD and $28.98 for the Blu-ray Combo Pack.

After the death of his wife, Carson Drew decides to leave Chicago behind and make a fresh start with his daughter in River Heights. But for 16-year-old Nancy Drew, life in a small town is mighty dull. She longs for excitement, adventure, and the chance to make a difference. Nancy gets that opportunity when she is asked to help solve the ghostly activity at the Twin Elms mansion. Can she help explain the creaking footsteps, exploding lightbulbs and the ominous creature? Is it the handiwork of high-school bully Derek Barnes? Or is it possible that the ghost of original owner Malcolm Colfax is back for revenge? Recruiting her best friends George and Bess, along with local “mean girl” Helen, Nancy Drew is on the case!

Check out the newest Nancy Drew and the Hidden Staircase blog app.

• Welcome to the Interactive Nancy Drew Escape Room – to escape, you must solve riddles and find items to uncover the three numbers needed to open to door. Good Luck!

• In the Mystery Match Video Puzzle, use your mouse to click + drag puzzle pieces to unlock clips from the film.