Who doesn’t love Robin Williams? He is one of the most iconic and best comedians of all time. I still miss his work to this day. For those of you who are not familiar with his comedy specials, hold on to your butts cause thanks to our friends at Time Life, there’s a new DVD set out with all five of the legendary HBO specials.

To say they are hilarious is a vast understatement!

We are so fortunate to have some copies to giveaway as well! Woo to the hoo!

“A tribute to Williams’ brilliant wit”

GET FRONT ROW SEATS TO COMEDY GENIUS WITH A TRIO

OF DVD COLLECTIONS CELEBRATING AN INIMITABLE ICON –AVAILABLE FOR THE FIRST TIME AT RETAIL! 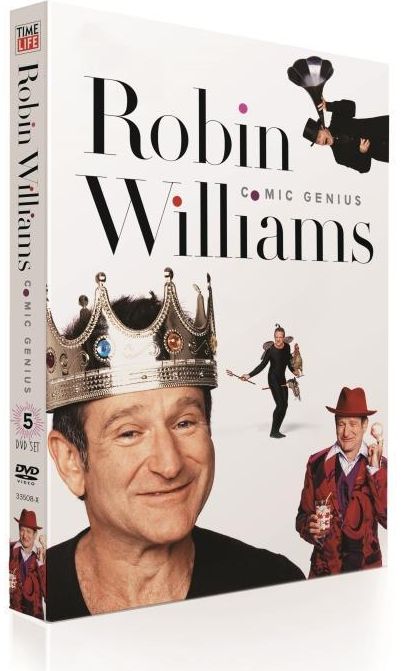 On October 1, Comedy Fans Will Thrill to One-of-a-Kind Compendiums

Spanning the Electrifying Comic’s 40-Year Career, Including a 5-Disc

FAIRFAX, VA (September 9, 2019) –Robin Williams started performing stand-up comedy in the mid-’70s, amazing audiences with his frenetic energy and razor-sharp wit. Graced with comedic brilliance, rapid-fire improvisation, and a deep well of warmth and compassion that translated to everything he did, America quickly fell for him in his first role as the naïve and hilarious alien from the planet Ork in ABC-TV’s Mork & Mindy. Rocketing to stardom, the generational talent would go on to do five HBO stand-up specials and dozens of feature films, performing steadily for nearly four decades and entertaining audiences across the globe.

Williams’ longtime friend Billy Crystal said “You know that cartoon, that Tasmanian devil that comes out and just spins – he was that, but eloquent and hilarious.” That’s on full display in the 5-disc COMIC GENIUS collection ($54.98srp) featuring the crown jewels of Robin’s iconic career: all five legendary HBO specials together in their full glory – Off The Wall (1978), An

Evening with Robin Williams (1983), An Evening at the Met (1986), Live on Broadway (2002), and Weapons of Self Destruction (2009). Whether riffing on  platypuses, presidents, golf, gorillas, or human anatomy, Williams always left his audiences in stiches, and this set, featuring more than 13 hours of hilarity does just that! Also included is rare archival footage of Robin’s early stand-up, raw footage from HBO’s promo shoots and press interviews, the People’s Choice Awards honoring Robin and E! Press Room footage, featurettes and exclusive new interviews with Lewis Black and Robin’s manager, David Steinberg.

Uncensored, electric, intense and unfailingly hilarious, Williams made it his life’s work to make people laugh and nowhere is that on greater display than in the mammoth 22-disc COMIC GENIUS set ($279.98srp). On top of Robin’s unforgettable HBO Stand-up Specials, the set also includes more than 50 hours of uproarious entertainment featuring never-before-released shows, including Robin’s full MGM Grand Garden Arena stand-up from 2007 and the Montreal stop on his last tour in 2012, his best talk show and late-night TVappearances on The Tonight Show Starring Johnny Carson, The Tonight Show with Jay Leno, The Oprah Winfrey Show, The Graham Norton Show, Saturday Night Live and more,11 hilarious episodes of Mork & Mindy, including the two-part pilot, James Lipton’s Emmy Award®-nominated 90-minute interview with Robin on Inside the Actors Studio, plus deleted scenes, a comprehensive collection of Robin’s USO shows around the world and the critically acclaimed 2018 HBO documentary Robin Williams: Come Inside My Mind.

raw footage from HBO’s promo shoots and press interviews, brand new interviews and intros with Jay Leno, Lewis Black, Pam Dawber, Martin Short, and Robin’s manager, David Steinberg, as well as Robin Williams: Uncensored, a collectible 24-page, full-color memory book featuring rare archival photos, reminiscences from friends and colleagues, Robin’s personal tour notes and more. Of the 22-disc collection, David Fear of Rolling Stone said “For fans, of course, the ability to collect so much Williams visual ephemera in one package is a gift from the gods. But for comedy-nerd completists, the sort of people who study the form and argue over the peaks of its practitioners, this intimidating set is close to a dream.”

From comedy clubs to stadiums, from talk shows to USO tours, Williams continually amazed audiences with his frenetic energy and unbelievably quick wit. Home audiences looking to bear witness to the comic’s first HBO special need not look any further: the DVD single ($14.95srp) features 1978’s legendary Off the Wall. Also included in the release are The Second Annual HBO Young Comedians Show, Robin’s appearance on The Dick Cavett Show and The Great American Laugh-Off,an exclusive interview with David Steinberg and the featurette, Robin Williams: The Early Years. 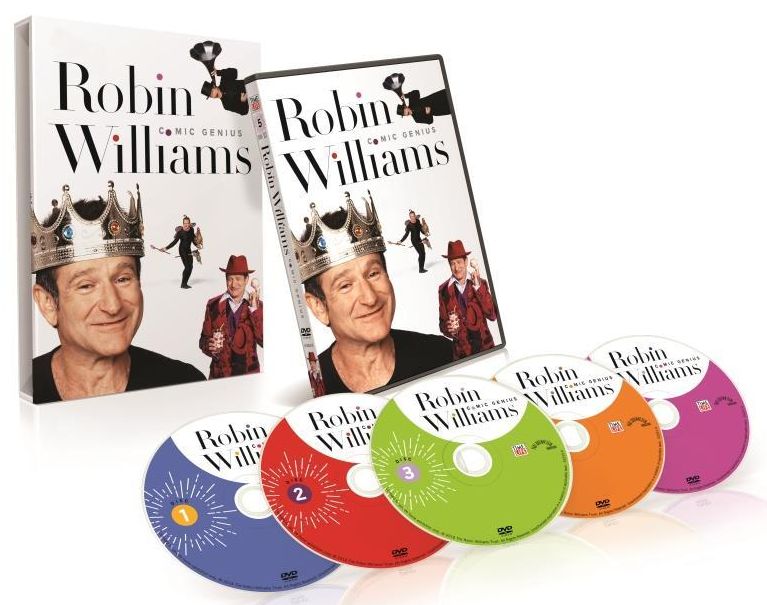 Williams. Jay Leno said, “Everybody else prepared, Robin was just a natural…and he worked on every level.” Steve Martin stated his friend was like “something waiting to happen…a very powerful anomaly.”

In unforgettable ways, ROBIN WILLIAMS: COMIC GENIUS reveals and celebrates the wide range of his incredible talents like never before.