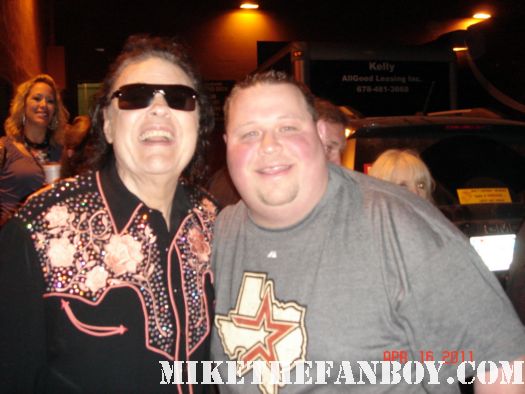 If you ask me about this again, I will deny it… Totally deny it… I mean I’m denying it now before it even happens. But, I happen to know a couple Ronnie Milsap songs. Now, stop right there… Don’t get all excited, it’s true… “Smoky Mountain Rain” is a good song, there; I said it’s out there for the world to read.

Now, while I may be a cough… cough… Casual fan, our reporter from the state of Texas Mr. Chuck is a huge Ronnie Milsap fan! Did Ronnie make his day?

Check out the full report from Chuck below! Rock on brother!

I know that country music isn’t everybody’s forte, and with the current crop of new comers to the genre I don’t blame some of them.

However, like Mike…I am stuck in the 80s when it comes to some great music…I like the old country music. Hence my next autograph adventure.

Ronnie Milsap was in town for two shows and I have had an LP for 3 long years I needed to get his signature on. Well I got down to the venue around 9:30pm and stood out near his bus. Around 10:00pm people started leaving and I was ready for anything! Around 10:20pm Ronnie came out with his manager and walked towards me. His manager asked me if I wanted my LP signed…Did I? Heck yes I did! Anyways he took it from me and told Ronnie that I had some vinyl for him to sign. Ronnie said very loudly, “I LOVE VINYL!” He then proceeded to sign my album for me. This was awesome! Another LP from my collection was finished and signed.

I thanked Mr. Milsap and told him how much I had enjoyed his music over the years. He thanked me for being a fan. I asked him if I could get a photo with him, and he said, “Let’s do this!” As I handed my camera to his manger and readied myself for the photo opp, Ronnie said again very loudly, “29.” It made me laugh because he was in such a great mood. This is why I am laughing in the picture.

Another great night and celeb encounter. Thanks Mr. Milsap for being great to your fans.