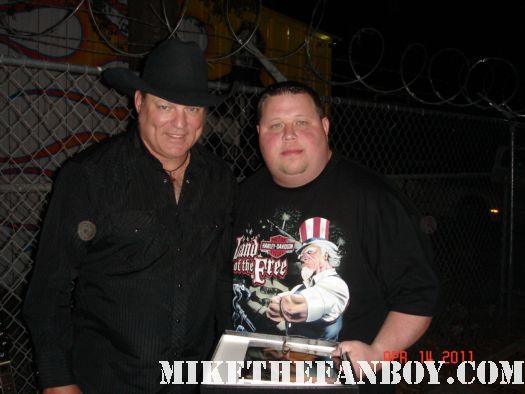 This is what I love about fandom… Everyone is a fan of something, I personally may not be a fan of say Jewel (Faux-feeling Lilith-lite B/S) or Full House (derivative trash that makes 1990’s television look bad) but someone out there does like them. They have fans, and I’m glad they do… well… Maybe not Jewel. Anyway, I just got this fun report from Chuck who just got to meet Mr. John Michael Montgomery! Now, me, not a fan per se, but Chuck grew up with John Michael Montgomery and I totally get why he loves him.

So without further adieu… Take it away Chuck!

Here in Texas, we know about two things….BBQ and country music.

Since I rather enjoy meeting my musical icons I grew up listening to, I was thrilled to find out country music singer John Michael Montgomery was coming to town. I mean the man has sold over 16 million albums and has had several number 1s!

I left my apt around 9pm and got to the venue around 10pm. I waited for the show to be over. Around 10:30pm I managed to work my way up beside his bus and waited on him to come back off after freshening up a bit.

I met another collector who had a guitar, a cowboy hat, 12 cd covers, and 3 cassette tape covers…..Yes my man had everything to get signed. Well John’s manager came off the bus and asked what we had and we showed him. He brought us over by the bus and John came off to sign for us. He signed my song/music sheet book, and then proceeded to sign all the other guys’ items. I then got a quick photo with him.

I have heard from other people that he was a difficult signer, but he exceeded my expectations.

My photo with him has these weird orbs on them, but it is still a good picture none the less.