“I wanna be a cowboy… and you can be my cowgirl.”

The following may be a slight exaggeration.. Or it could be completely true. Really… What is truth and what is an exaggeration? You be the judge.

Apparently there is something called the Cowboy Awards? I guess… they judge the best spurs and who has the coolest cowgirl? Sort of… It brought out the elder elite of the cowboy world. And it also brought out Ace.

Why did I go? I know… I was thinking that myself. There were a couple random names and I could walk there and why not?

On my way there.. I get a frantic call from Ace…

“Go Home… Bro…Bro… Bro… Get everything Spaceballs you have… Bro… Dick Van Patten is here!”

“Ace… I don’t need Dick Van Patten on anything.”

“Bro! You’re turning down an autograph? I dunno, I dunno I have an 8×12 photo.. I gotta… I gotta go! Sally Kellerman is here and I have a bottle of Hidden Valley Ranch for her to sign!”

And so begins my night.

There are about 8 or so collector’s lining the hallowed halls of the cowboy awards… Now… I understand liking random names and people, I’m the king of it. So I have no judgement on that trust me. 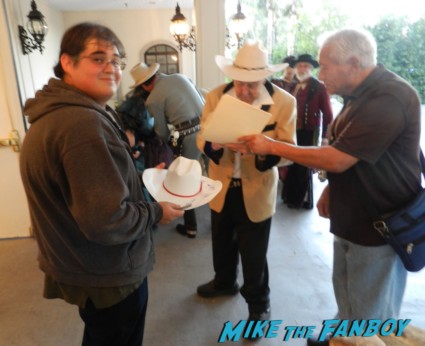 “Bro… Lou Gossett Jr. Is already in and he SIGNED!”

Ace shakes his head fully lamenting the fact that he didn’t dig his spurs out of storage. The costumed Lone Ranger who is escorting people in even looks perplexed. 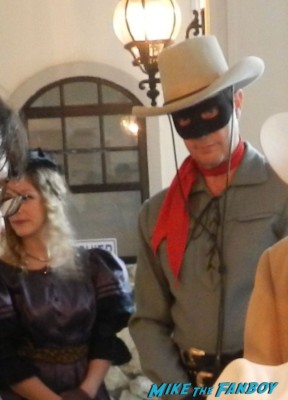 Ace has his customary black hoodie, thermal undies, and three layers of shirts… There is a crisp chill in the air and its only 65 degrees outside.

It was a slow night at the cowboy awards… But the tension… You could cut it with a tumbleweed.

A few small people… Someone who once knew someone who did an episode of Six Feet Under… Big names.

And then it happened the person everyone was looking for, the man, the myth, the legend… It was Jon Voight. And the crowd goes crazy.

Ace doesn’t know what to do? Does he go for the 30 photos (all for Deliverance strangely enough) or does he keep an eagle eye out for Bud Cort… There’s a rumor he might show! I have Ace’s Mission Impossible poster because I told him I would help. Jon Voight is super nice as usual. He signs some random 4×3 photos from 1968 that were dug up from some woman’s basement and an autograph book, and then Ace… Ace Goes Wild! This shit is on… It’s on like Donkey Kong! Flipping that photo faster than Jon Voight can sign.

Ace’s doesn’t care… He’s a man with 500 things for Jon Voight. The look of disdain on my face is palatable. Beads of sweat form on Ace’s brow… He is going to Voight these photos or die trying.

“Simmer down there” says Jon Voight as Ace tells him what an icon he is.

I just shake my head… 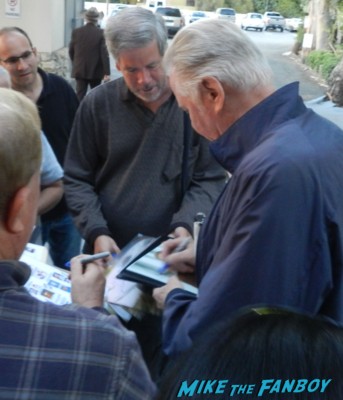 After that spot it’s downhill… Once you get your key name, you can breathe easy. A few random names from 1910 show up and an extra from Wild Bill Returns make their debut.

Then… Pandemonium… Frothing at the mouth… Mass chaos… It’s like there’s a zombie outbreak. Ace grabs his cowboy hat (Did I mention he was getting everyone to sign a random hat?) and gets ready for action….

And who could be nicer… Connie Stevens… Adorable… And what do I say…. I say… I’m going home. 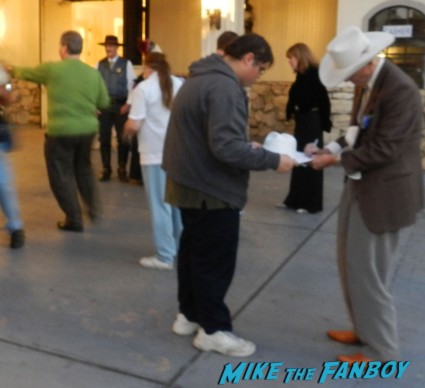 So ends my night at the Cowboy Awards…

Ace is there right now… There was an extra cowpoke he thought might show up he could get on his hat. 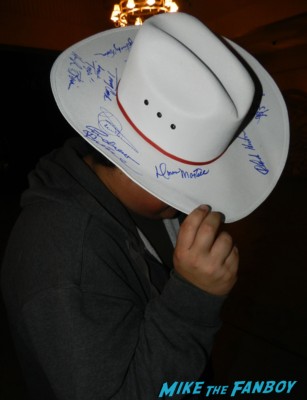