One of my favorite films of all time is The Evil Dead. Now, I can’t watch it all the time because some people around me get scared of horror films… Cough… Yet, I’ll never forget watching The Evil Dead for the first time in high school after being given a copy by a friend on VHS of all things.

In fact, I went to the Oz: The Great And Powerful premiere with one of my main intentions to meet Sam Raimi and Bruce Campbell. Jack had an awesome experience with practically the entire cast of the original film (grrr.. I’m jealous)!

Check out his full report after the jump and on the eve of the remake hitting theaters no less!

This Friday a remake of one of the most beloved cult films of all time will be released. Since the earliest rumblings about a possible remake for “Evil Dead,” fans worldwide have reacted every imaginable way, but the fact Bruce Campbell and Sam Raimi are on board makes many feel at ease. 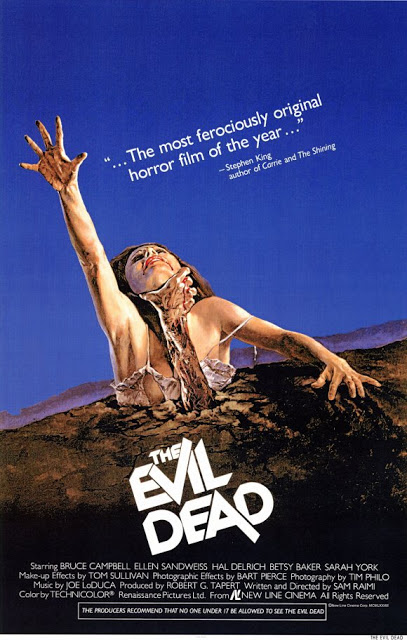 In honor of this fantastic film, let’s go and revisit the original classic with this week’s Cult Classic Corner. Since I can remember, “Evil Dead” has been one of those films horror fans put on a pedestal and it’s not hard to see why. Besides the upcoming remake, the franchise spawned two sequels, “Evil Dead 2: Dead By Dawn” and “Army of Darkness,” the latter of which officially introduced me to the “Ash” character in 1993. 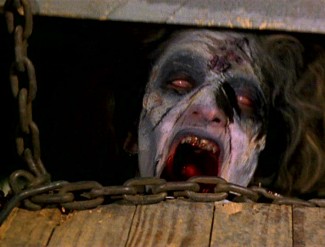 Before Netflix I remember scouring various video stores just trying to locate a rental copy, let alone purchase the VHS. As “Evil Dead” fans can attest, over the years there have been countless Special Editions (Book of the Dead Limited, Boomstick, Ultimate, etc.)/versions for every single home video market release on Laserdisc, DVD, VHS, Universal Media Disc (For the PSP) and Blu-Ray. However, there was a time it was nearly impossible to locate VHS copies until they were rereleased in the late 1990s. In 1998, New Line Cinema released a special edition VHS that was limited to 35,000 copies and allowed me to experience “Evil Dead” for the very first time. Since then I have purchased several limited edition titles from the “Evil Dead” franchise. 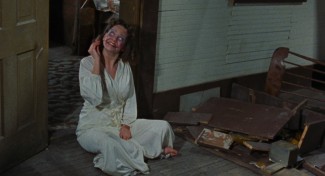 “Evil Dead” tells the story of five Michigan State college students, who visit an isolated cabin during their Spring Break. Ashley “Ash” Williams (Bruce Campbell) brings his girlfriend Linda (Betsy Baker) and another couple Scotty (Hal Delrich) and Shelly (Sarah York) along with his sister Cheryl (Ellen Sandweiss) to secluded cabin in the Tennessee hills for a nice vacation getaway. After arriving, the group discovers a tape recorder reciting demonic incantations from the Naturon Demonto a.k.a. Book of the Dead. 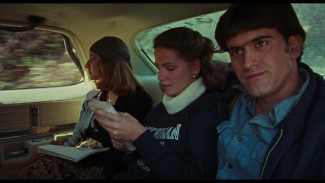 Upon hearing some voices in the distance, Cheryl searches the woods only to be attacked and raped by possessed trees. Fortunately, she escapes to the cabin deeply disturbed, but no one believes her absurd story about “the woods coming alive.” Ash attempts driving Cheryl to town, only to discover the bridge “back to civilization” has been destroyed and quickly returns to inform the others. Soon the inhabitants of the cabin are possessed one by one with the survivors fighting off their loved ones trying to survive the night. 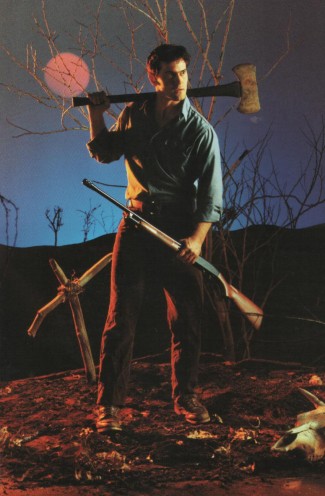 Unlike the subsequent sequels relying on horror-comedy, “Evil Dead” persisted as a straight forward horror film frightening audiences all across the globe, eventually becoming a sensation. Thanks to distributor Irvin Shapiro (George A. Romero’s “Night of the Living Dead”) and Stephen King, who wrote a glowing review of the film, “Evil Dead” found an audience and launched the careers of Sam Raimi and Bruce Campbell.

Over the years I have been quite blessed to meet almost all the principle people behind the film with the exception of director Sam Raimi and Hal Delrich. I have met Betsy Baker, Sarah York, Ellen Sandweiss, makeup/special effects artist Tom Sullivan and of course, Bruce Campbell. I first mentioned meeting Bruce at the Fangoria: Weekend of Horrors in June 2005 to celebrate my birthday. Even though I highly urge people to avoid all Creation Entertainment conventions (Total rip off for $300 tickets) I had a great time meeting all the celebrities despite having to pay for every single autograph.

The “Evil Dead” ladies were meeting fans in the main dealer’s room and they were all complete sweethearts. Ellen, Betsy and Sarah took their time with each fan answering every imaginable question, which made it even better. Since the entire cast (except Hal Delrich) was at the convention I brought along my “Book of The Dead” special edition DVD to be signed by everyone. 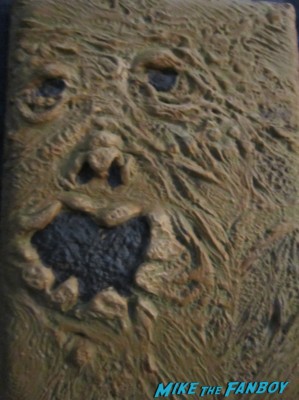 While I was checking out their photos, Sarah informed me Hal Delrich signed a ton of photos for the show since he couldn’t make the trip to “apologize” and I decided to pick up a photo as well. Everything of mine was personalized by the cast and they all included nice inscriptions without even asking for my input. 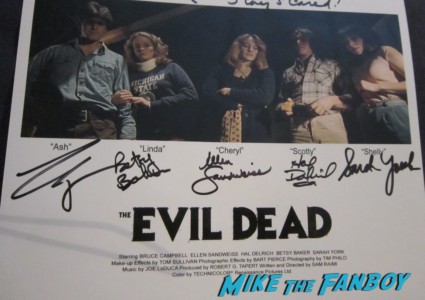 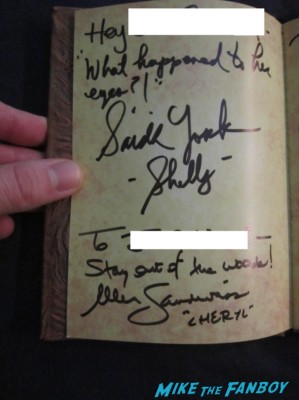 I then stopped by Tom Sullivan’s booth and we started talking about how he designed the Book of the Dead. Afterwards he wished me a Happy Birthday signing/sketching a few prints for me, but it was his inscription/drawing in my DVD that ruled: “Lick the blood off my shovel!” Your Beast Fiend, Tom Sullivan and added a dripping bloody skull. He honestly doesn’t get enough credit for his brilliant artwork featured in the franchise and beautiful limited edition DVDs. 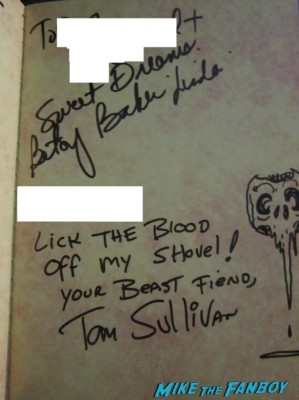 Like I previously mentioned in my “Bubba Ho-Tep” article, I managed to get six items signed with Bruce Campbell when my father and I met him at the show. After telling me to “Burn This” (referring to the cast signed DVD), 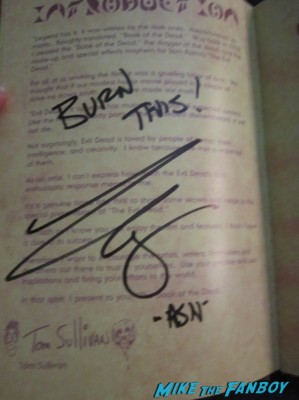 Bruce was rendered speechless when I pulled out my Japanese laserdisc for “Evil Dead” during our meet and greet. Despite telling him I bought it that day, Bruce didn’t believe me and seemed completely mesmerized before signing it. 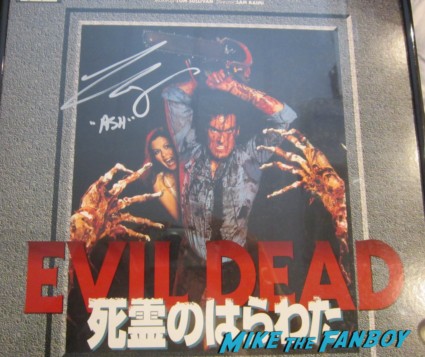 Bruce was a complete class act during the signing and super friendly answering whatever quick questions popped into your mind.

However, when I took a photo later that weekend (by a professional photographer) with “Ash,” the person in front of me pissed off Bruce and as a result, ruined my photo. Luckily, a few days later I got a great photo. Still, be careful what you say as Bruce is hit and miss when it comes to fans. He can either be super charming or standoffish, which is because someone said something stupid/were rude to him at an appearance. So be warned. Whether you check out the remake I hope you revisit this cult classic very soon. 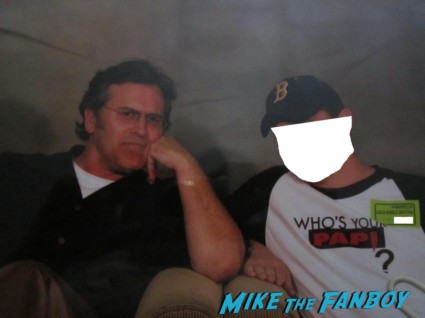