Okay, I admit it… I’ve never seen Repo Man. Never. It’s one of those movies that I just have missed. I’m sure Jack just did a face palm! LOL… Don’t worry Jack has a compete recap of the film for those of you like me who missed this film.

Check out his cull recap and this weeks Cult Classic Corner after the jump!

“Look at those a$$holes, ordinary f***ing people. I hate ‘em.” If you’re a cult film buff, this line should be instantly recognizable. Thanks to a reference in the pilot episode of “Party Down” and the Criterion Collection’s recent release (this week), “Repo Man” still persists as one of the most celebrated films of the 1980s. 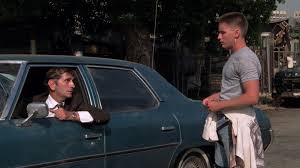 Executive produced by Michael Nesmith (Yes, the guy from The Monkees) and directed by Alex Cox (“Sid and Nancy”), “Repo Man” tells the story of a young punk named Otto (Emilio Estevez), who gets fired from his supermarket job and decides to drink the night away to overcome his depression. While walking the streets of Los Angeles, he comes across Bud (Harry Dean Stanton), who asks Otto for help to move his “old lady’s car.”
Otto then follows Bud to the Helping Hand Acceptance Corporation, a repo company and is initially disgusted by the idea of repossessing cars. However, after realizing he gets paid in cash immediately, Otto decides this might be the job for him. One day while driving around, he meets Leila (Olivia Barash), an attractive young girl who shows him a picture of four dead aliens. Despite his laughter, Leila proceeds to tell him that there is a 1964 Chevrolet Malibu containing the four alien corpses driving from New Mexico to Los Angeles. Otto disregards her story until a reward of $20,000 is offered for the Chevy Malibu at the repo office and he reads a tabloid with the very same picture he saw. Soon government agents, rival repo agencies, and gangs are also looking for the vehicle. The question is who will find the Chevy first? 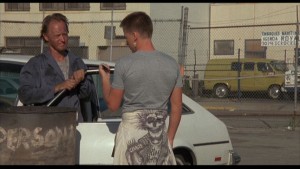 What makes this film so great is the stellar supporting cast of Harry Dean Stanton and Tracey Walter (who won a Saturn Award for his role as the philosophical Miller), the amazing punk soundtrack (feat Iggy Pop, The Circle Jerks, Black Flag and the Suicidal Tendencies), and an amazing performance by Emilio Estevez in one of his first starring roles. Even to this day, “Repo Man” still holds up as a classic and is constantly referred to as one of the best cult classics of all time. 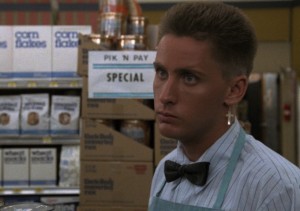 Tracey Walter steals every scene with his character Miller and Emilio Estevez is pitch perfect as Otto. Honestly, if you have never seen this film, you owe it to yourself to discover it! If you want more “Repo,” check out the graphic novel of the unfilmed sequel “Waldo’s Hawaiian Holiday” (due to legal rights) and/or the semi-sequel “Repo Chick,” which has a similar plot but is not officially related despite Alex Cox and several of the “Repo Man” cast involvement. 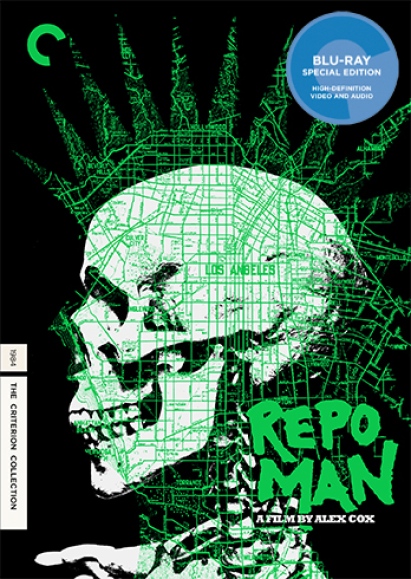 Over the years I have been quite fortunate to meet the three leads and received sad news about seeing the film on the big screen. First, the sad news regarding writer/director Alex Cox and seeing the film on the big screen. Back in September 2010, Alex was scheduled to appear at a Q&A between “Repo Man” and his microfeature “Searchers 2.0,” but a flat tire prevented him from attending. On his website, Alex wrote “I must apologize for my failure to appear at [the Los Angeles] events! Setting off at 5.45 I had a flat tire (a.k.a. tyre) at the top of our dirt road and spent the rest of the day engaged in its replacement. Thus is life in the WUI, or Wildland Urban Interface.” Fortunately, the movie theater gave a heads up to everyone on Facebook and I decided to stay home despite having already purchased my ticket. So I missed my only opportunity to see Repo Man on the big screen along with several of the supporting cast in attendance (Sy Richardson, Del Zamora and Olivia Barash). 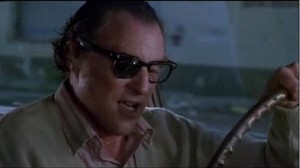 However, I did manage to meet Harry Dean Stanton at a DVD signing at Book Soup for the film “Char-ac-ter” with director Drago Sumonja, Mark Rydell and Dabney Coleman on December 17th, 2010. After he finished talking to a fan in the signing line I managed to get Harry Dean’s attention to sign my “Repo Man” DVD, but instead of asking my name he personalized it to “Patrick” thinking I was “the guy he was just talking to.” Of course this was about the time Book Soup employees scolded fans for asking for personal items being signed in addition to the DVD (By the way, the documentary was horribly filmed and would strongly suggest not seeing it). Still, it’s cool I met one of the greatest character actors of all time, but I would be lying to say I haven’t debated about crossing the name out. 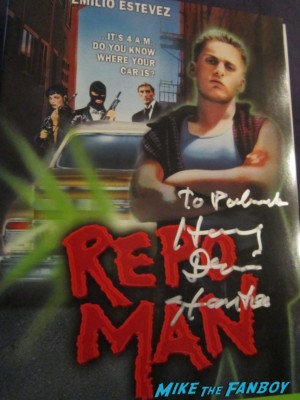 Eventually I met Emilio Estevez while he was out promoting “The Way” at the Landmark and got a DVD signed, but of course the black Sharpie started to “die” when he signed the film. Unfortunately, the theater employees started to kick everyone out despite him being very polite to all his fans. One day, I will get another Emilio autograph, but for now I’m left with my one “dead” autograph. 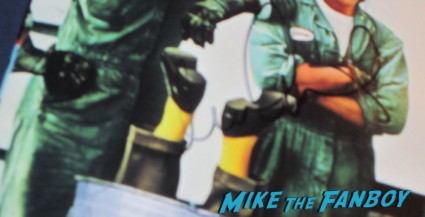 Lastly I met Tracy Walter, another fantastic character actor, very randomly in a movie theater. As Mike wrote about, Michael Keaton did a Q&A for “Beetlejuice” and “Multiplicity” (https://www.mikethefanboy.com/batman-and-beetlejuice-star-the-iconic-michael-keaton-signs-autographs-for-fans-toy-story-3). During the Q&A the audience learned Michael feels uncomfortable with crowds and during one of the last questions, a man stands up, who sounds very familiar. Sure enough, it’s Tracy Walter and asks Michael a question about action figures, who then smiles when he recognizes Tracy. Unfortunately, Michael DID NOT SIGN INSIDE and took off immediately. However, since I brought along my “Batman” laserdisc I approached Tracy, who gladly personalized it in the lobby and answered various questions until the theatre staff yelled at everyone in the lobby. 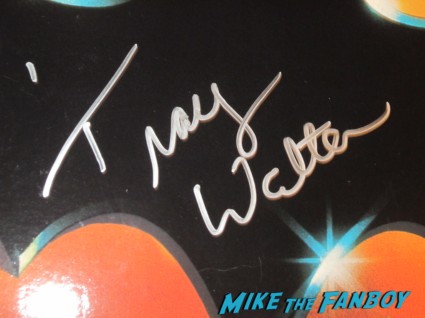 Even though I met the three leads and had them sign three different items (thanks to the Patrick inscription) I think it’s pretty cool everyone was pretty friendly. By the way, has anyone else had a “bad autograph” scenario even though they got an autograph with a poor inscription, personalization or smear? Until the next time, happy autograph hunting!