It’s true, I think either you “get” Rocky Horror or just get left out of the loop. Quite frankly, I’m not even sure what it is about Rocky Horror that appeals to people… It’s a strange, campy phenomenon that can be hard to pin down.

I remember many a midnight showing and my first “virgin” viewing of the film. That was an experience. LOL…

For this weeks Cult Classic Corner, Jack is going to take a look at Rocky Horror and his love of this campy slice of fun!

“I see you shiver with antici…pation.” If you said, “Say It,” you’re alright in my book. This past weekend The Hollywood Collector’s Show had a rare treat for the West Coast reuniting three principle cast members of “The Rocky Horror Picture Show.” Both Nell Campbell (Columbia) and Patricia Quinn (Magenta) made their first ever West Coast convention appearance and were an absolute delight. They were also joined by Barry Bostwick a.k.a. Brad Majors. 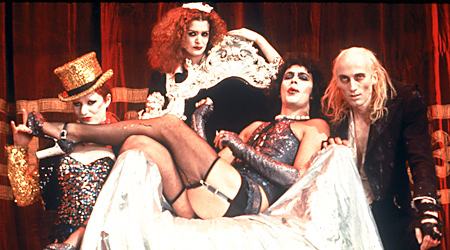 Now I could go on and on about “Rocky Horror,” but let’s cut through the BS. You just want to know the cool details and I don’t blame you. Besides around Halloween I will do a more in-depth column about the film and play. Like I mentioned above, both Patricia Quinn and Nell Campbell had never attended any West Coast convention so seeing them listed as guests I knew I had to attend the show no matter what. As luck would have it, the show was taking place on the same day as Record Store Day, which meant I would be “working overtime.” Sure enough I was up from 4:15 a.m. to 7:00 p.m. on Saturday, but boy did I have fun and even ran into Suddenly Susan and Pinky at the show!

I arrived at the convention about 12:15 and took a quick look around. Fortunately for me, my friend’s booth was directly near the “Rocky Horror” cast and I was able to drop my items off while I walked around. I brought along five of the eight lobby cards and an original “B” poster with the yellow legs to get signed. Originally I wanted to bring along my “A” poster, but due to age it was slowly falling apart and too sensitive to be opened/closed a few more times.

Since there was hardly anyone around the “Rocky Horror” booths around lunch time I stopped by Nell Campbell’s first, but waited while some lookie-loos checked out her photos. When she saw me, Nell graciously extended her hand and we began talking about the movie. Throughout my adult life I have dressed as various characters from the movie and we exchanged a few tidbits about Meat Loaf.  After she signed my “final show” cast lobby card, Nell was quickly pulled aside for a press interview and apologized moments later when she returned.

Upon Nell’s return I asked for a specific inscription on my poster and pulled out a piece of paper with it all written out. Due to previous experiences I now always make a print out for all personalization/inscription requests. Nell started signing the sheet “You’re…” before her handler and I stopped her. She then joked, “I found it strange you wanted me to sign a piece of a paper” and then added a beautiful, “You’re very lucky to be invited up to Frank’s laboratory” – Nell Campbell to my poster. 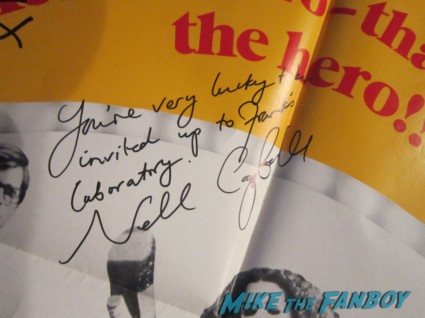 After letting the autographs dry I stopped by Barry Botswick’s booth and shook hands with a “President” (He played by George Washington and FDR) . I informed him how cool it was to meet an “American Badass,” referencing his film, “FDR: American Badass.” He was happy to meet someone who spoke so highly of the film and had seen it. When I informed him there was a drinking game for the film, he burst into laughter and we joked at great lengths about the film. 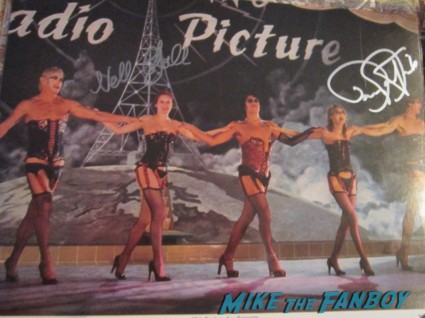 Eventually we started talking about “Rocky Horror” and it just got cooler. Barry was in great spirits and loved hearing how the film made an impact on me. When I pulled out the original lobby cards, Barry was blown away that I had them and was really excited to sign them. 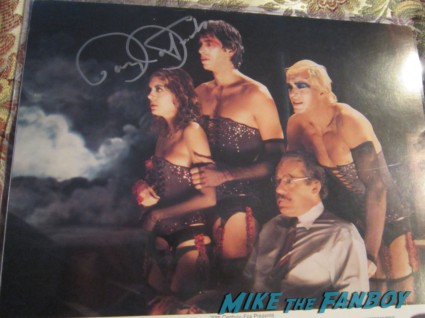 Like Nell I asked him to inscribe the poster, which he graciously did when I told him it was my favorite line from the movie: “Oh, it’s probably some kind of hunting lodge for rich weirdos”- Barry Bostwick 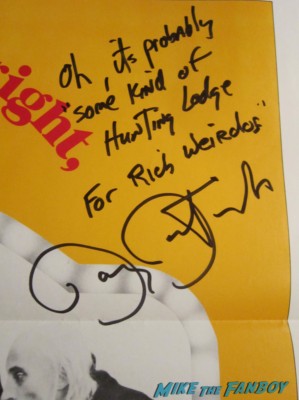 Then there was the ever charming Patricia Quinn. If there’s one cast member you should meet, it’s her. Patricia can literally talk your ear off and you will love ever moment of it. Sure enough I introduced myself and before I could ask for autographs we went on tangents about Rocky Horror and life. For five minutes straight, we talked about random Rocky Horror tidbits and I convinced her to check out her new film, “The Lords of Salem,” at the Arclight Cinemas since Rob Zombie and Sheri Moon Zombie would be doing a Q&A Sunday night (But more on that another time). Patricia was truly fascinating to talk with at the show and definitely made my day! 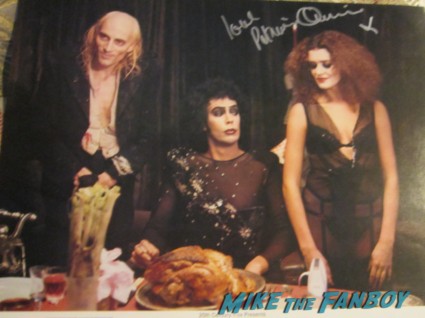 I received three gorgeous autographs on my lobby cards and it only got better. 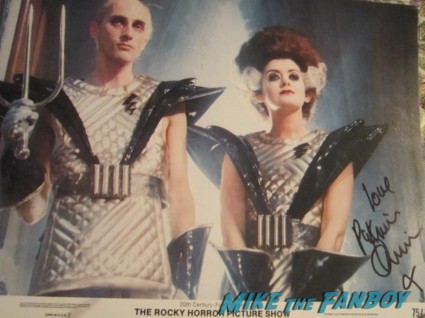 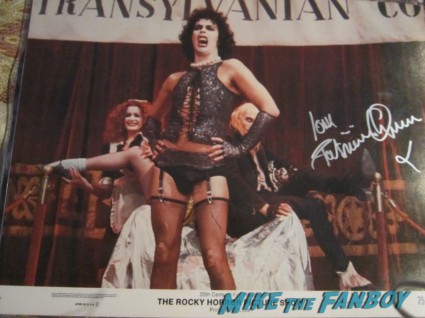 While she’s inscribing my poster, several people started flocking towards the area to check out my poster.
“I grow weary of this world. When shall we return to Transylvania, huh?” Patricia Quinn 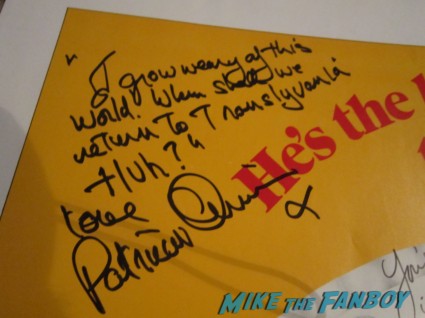 Afterwards Patricia thanked me for coming out and informed me, she’s never really done any Rocky Horror inscriptions, especially on the posters, which made me ecstatic. Now I have a gorgeous poster and I don’t care if I don’t get to “complete it.” This thing is one of a kind and I doubt anyone wouldn’t be impressed by it. 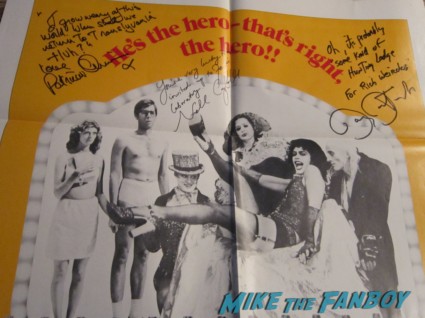