You know… I love me some Chevy Chase! Love him! I love Vacation, Spies Like Us, Funny Farm, I grew up with the comedy stylings of Chevy Chase. I know, that says a lot about me right? Still, it’s true back in his day Chevy Chase was a master comedian!

In todays Cult Classic Corner Jack talks about his love of Fletch and meeting none other than Chevy Chase. Now, Chevy has been known to be a stickler and you just never know what you’re going to get when you see him in person so… Let’s just say, he has an interesting way with personalizations! LOL…

Check out Jack’s Cult Classic Corner after the jump!

What do Ted Nugent, Alan Stanwyck, John Cocktoston, and Jane Doe have in common? If you already blurted “Fletch,” you’re awesome in my book.  Like I have previously mentioned in other articles, Chevy Chase has been a comedic idol of mine since I can remember and “Fletch” is my all time favorite Chevy Chase film. Whether its the crazy characters, sharp quips or excellent supporting cast (including a young Geena Davis and the always awesome M. Emmett Walsh), “Fletch” is a timeless classic. 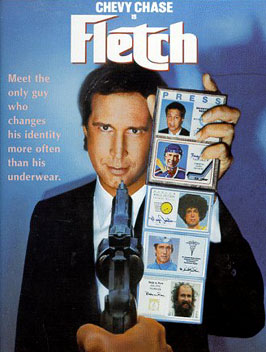 “Fletch” is one of those rare movies where anytime it’s on TV I have to finish watching it, regardless of what I’m doing. Chevy Chase is truly at the top of his game in one of the quintessential comedy films of the 1980s. The basic plot is Irwin M. “Fletch” Fletcher writes a column under the name Jane Doe and is investigating what’s happening at a local beach. Perceived as a bum, businessman Alan Stanwyck (brilliantly played by Tim Matheson) proposes Fletch kill him for $50,000 because he is dying of cancer. As Fletch investigates Stanwyck’s affairs, things are not as they appear. 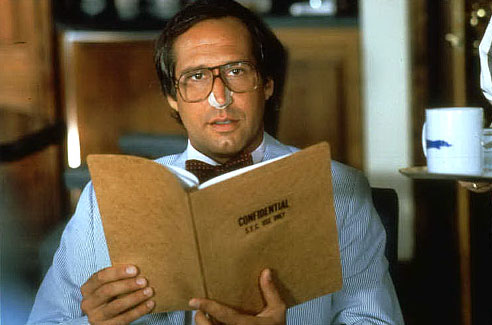 There are so many cool characters and jokes I really don’t want to ruin anything. Whether you’re seeing it for the first time or the 20th, there are plenty of things you will pick up. Next time around, see if you can find the “Animal House” references. 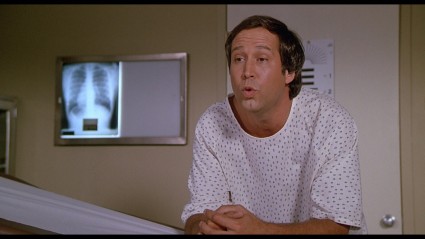 So far I have met three cast members from “Fletch.” The first was a random bump in at the Hollywood Amoeba with Tim Matheson and his daughter. We were leaving/entering at the same time and I was able to have a brief “fanboy” moment (circa 2007).  The next one was also a random bump in at the 2009 AFI Fest premiere of “Youth In Revolt” when I sat nearby Dr. Joseph Dolan (M. Emmett Walsh), one of the greatest character actors ever! However, Walsh preferred his anonymity and appeared reserved. Before leaving the theater I informed him how much I appreciated his work and received the cliché “Thank You” response.  Still, sometimes when you see someone who is never out and about it, there’s nothing wrong with taking a chance.

The saying goes “Never meet your idols” and I can understand why. Fortunately for me I have met tons of my heroes and with the exception of one, all have been great. The one exception was Chevy Chase and even that wasn’t too bad. Two years ago I first heard about Paleyfest and was thrilled one of my favorite TV shows, “Community,” would be participating despite it being a freshman sitcom. Having done some research I soon discovered the majority of the casts typically show up and are pretty fan friendly afterwards.

After initially being shocked by the price ($75 for front orchestra seats) I was excited to see an ad in the paper a few weeks later saying all remaining tickets would be sold at reduced prices for $15. Immediately I picked up my ticket (front orchestra) for “Community” and was excited to visit the Saban Theatre for my first Paleyfest.

I arrived early to the venue since it wasn’t assigned seating and hoped there would be something I could buy that was Community related to get signed. Luckily, Paleyfest provides cool program books that are awesome mementos and in recent years, 1988 Gallery has produced exclusive limited edition posters for the event. I really hoped “Annie” (Alison Brie), “Britta” (Gillian Jacobs), “Jeff Winger” (Joel McHale) and of course, Chevy Chase would show up. As it turned out, only Danny Pudi, Yvette Nicole Brown and Alison Brie were unable to attend and Ken Jeong was a surprise addition.

Before the event, a clip of Chase from the early 90s was shown from the Paley archives saying, “he would never go back to TV,” which garnered the best laughs of the night. During the Q&A, Chase said “Community” has just as good, if not better writing than his time on “Saturday Night Live,” which left many audience members stunned. Most people like myself, turned towards complete strangers and asked variations of, “Did he really just say this?” (My how the times do change!) The screening and event was amazing with the cast taking their time with fans. I got everyone who showed up from the cast, but Chase was the most difficult.

While everyone was ridiculously friendly, Chase seemed stubborn, but obliged requests. He grabbed my program and signed it. When I attempted to get a personalization for my Mom on my “Fletch” DVD, he had the biggest attitude. 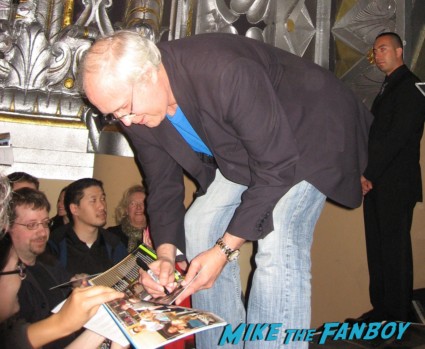 “No, I can’t personalize for you. If I do it for you then I will have to personalize for everyone…” and he went on for another 20 seconds explaining why he couldn’t. Even when I said it was specifically for my Mom, he completely brushed off my request, but still signed my DVD. 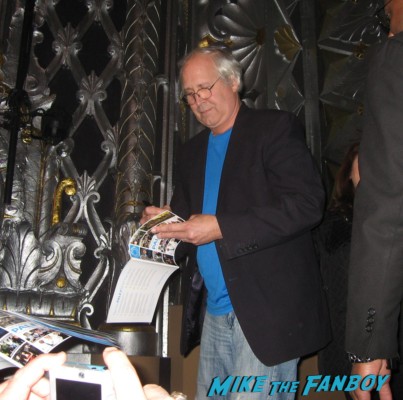 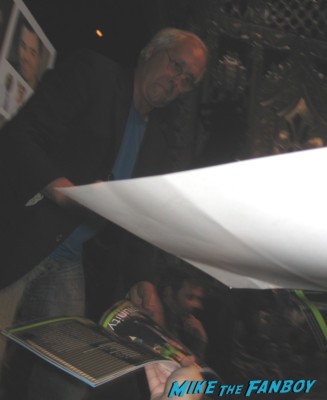 Chase seemed erratic, but I guess that’s his personality. Chase attended the following year (I skipped it) and I attended the last Community Paleyfest which he didn’t attend. Still, I have been holding out hoping I can meet Chevy again, but only time will tell. Until next time, happy autograph hunting! 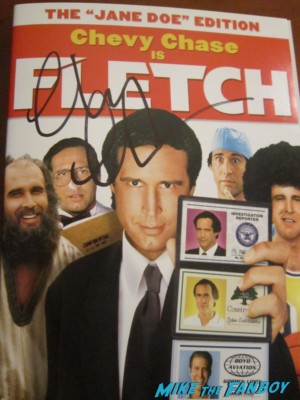