I hope everyone is having a wonderful Thanksgiving! I know I’ve been cooking up a storm here. But I wanted to take a break and make sure I got the newest Cult Classic Corner up and running.

Jack has written in about one of his and my favorite films, Zombieland! When I first saw the trailer for this, I was like… Hot damn… This is going to be awesome. It’s funny what a difference just a few years makes. When this movie was made Emma Stone was just starting out and now… Completely A-List!

Check out Jack’s Cult Classic Corner after the jump!

Let’s be honest, who hasn’t been thinking about Twinkies lately? Seeing auctions featuring Hostess products is laughable, but it got me thinking: What wouldn’t you do for a tasty treat you absolutely adore? Ask “Tallahassee” from “Zombieland” and he would answer, “Anything.”

Zombies have become extremely popular over the past several years thanks to an assortment of books (World War Z, Pride and Prejudice and Zombies, Zombie Survival Guide, etc.), comics (The Walking Dead, The Goon, Marvel Zombies, Hot Zombie Chicks, etc.), TV shows (“The Walking Dead”) and movies (“Dawn of the Dead” remake, “28 Days Later,” etc.). Like “Shaun of The Dead,” “Zombieland” is a charming horror comedy that leaves you laughing and pondering what the zombie apocalypse would be like.

“Zombieland” tells the tale of four zombie apocalypse survivors, who take a road trip across the south looking for a zombie free safe haven.  Jesse Eisenberg headlines a killer cast in his star making role as “Columbus.” Once the film begins, “Columbus” slowly reveals his survival rules throughout and they become a running gag, which include:  1) “Cardio,” 2) “Double Tap,” 17) “Don’t Be A Hero,” and 32) “Enjoy The Little Things” among others. As we discover, the zombie epidemic resulted from a mutated strain of Mad Cow’s Disease and slowly consumed the United States. “Columbus” has been able to survive for two months due to his antisocial behavior since he rarely ventures out of his apartment. It’s not until his neighbor comes by does he learn zombies are amongst the living. Once his neighbor “402” (Amber Heard in a cameo role) asks for his help, “Columbus” has to leave his comfort zone and look for safety elsewhere. 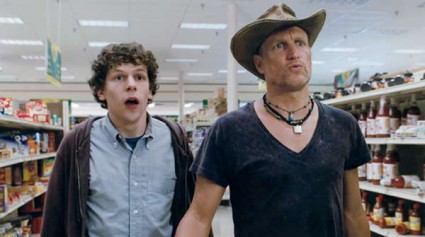 Along the way, he meets “Tallahassee” (Woody Harrelson) who reluctantly agrees to team up with “Columbus.” While out and about on one of their excursions, the duo meet former con-artists “Wichita” (Emma Stone) and her 12-year-old sister “Little Rock” (Abigail Breslin”). They all eventually agree to work as a team and agree to check out amusement park Pacific Playland, which is rumored to be zombie free. Whether it’s visiting a store, going on a private “Hollywood tour” or dealing with basic needs (food, shelter etc.), “Zombieland” perfectly blends the lines of horror and comedy. And yes, I purposefully left out the awesome cameo in the movie because people should be surprised. Overall, “Zombieland” is one of those guilty pleasure films you can watch all year round and it even surprisingly makes a great date night movie. 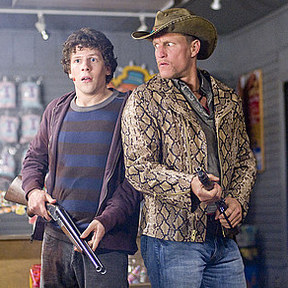 So far I have had four “opportunities” to meet three cast members from the film. Just after the “Zombieland” DVD release, it was advertised Woody Harrelson would be doing a Q&A for his superhero film “Defendor” at the Landmark Theater during opening weekend. For that February 2010 screening I Immediately bought my tickets because I knew this would be a rare opportunity since Harrelson lives in Hawaii and is rarely stateside. However, soon his name was removed from the theater website and the Q&A was unofficially cancelled. Instead, they merely had the film premiere at the Landmark Theater days prior to the originally advertised Q&A and I felt like a fool attending a screening with movie memorabilia.

Later that year (before “The Social Network” came out), Jesse Eisenberg did a Q&A for his film “Holy Rollers,” which was an even better performance than his role as Mark Zuckerberg. I went with my friend Armstrong and were pleasantly surprised to see Jesse already hanging out in the lobby of the Landmark prior to the screening. A few girls passing by asked for pictures and he happily obliged. My friend tried persuading me to do the same with asking for autographs and a picture. Personally, I feel weird asking for autographs in the lobby of a crowded movie theater and decided to wait. After the Q&A, Jesse happily signed autographs for fans and agreed to take pics. 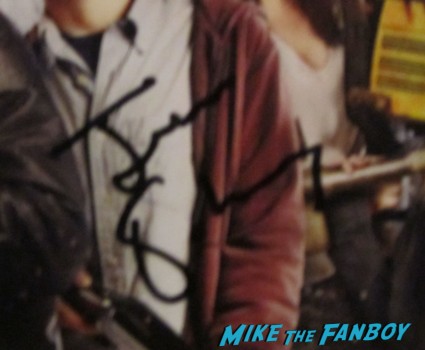 My friend Armstrong was the last one to get a pic before Jesse was pulled away. Thanks to my friend I was able to snag three autographs in total, including my “Zombieland” DVD cover. 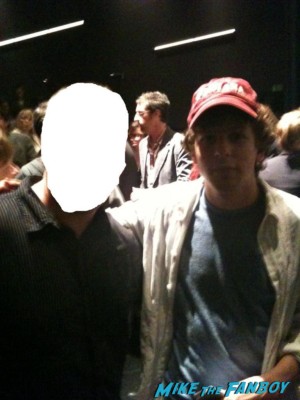 However, I need to bring this up now. I was EXTREMELY DISAPPOINTED with “one of the fans” who asked for a dozen autographs (literally) in front of me. Jesse was getting ready to move around and sign for everyone else when this guy kept pulling postcards and photos from underneath his stack. Fortunately for us there were only a handful of us carrying DVDs, but still it would be lame if we got screwed over because of this guy. PLEASE DON’T BE A JACKASS AND ALLOW OTHERS TO GET AUTOGRAPHS!

For LA autograph collectors, there’s an Asian woman who regularly attends Q&A’s and has almost severely ruined it for me twice when she busts out dozens of poorly printed copies of 8 x 10 film posters/film stills. Fairly recently, she pulled out at least 10 (maybe even 15) pics encompassing Carla Gugino’s entire filmography at the LACMA Hotel Noir screening and Carla almost stopped signing altogether because she was extremely frustrated. The Asian lady even had the guts to ask for a picture afterwards with me begrugdinly taking the photo. After two to three autographs, please let someone else have a chance and stop being so greedy. Just move off to the side and then take another chance. It’s because of people like this certain stars change their signing habits.

Later that year, Jesse Eisenberg appeared at the Hollywood Roundtable event for AFI Fest along with Andrew Garfield and Carey Mulligan. Out of everyone I thought Jesse would be the easiest to obtain, but he was the only one I missed. All the guests were promptly escorted out of the theater to take pictures on the red carpet in the front courtyard for waiting photogs and paparazzi. Eisenberg finished first, but was quickly escorted by AFI Fest staff and Sony publicists to his car with almost all the dealers chasing after him. In a few short months, he became an awards contender and his signing habits drastically changed. From what I saw, his handlers were really keeping him away from autograph seekers and aggressive autograph hounds.  Since then I haven’t personally seen him out.

The other opportunity was a Q&A at the LA Landmark with Emma Stone (and Lisa Kudrow) for a film called “Paper Man”, but I passed on it for two reasons. 1) I heard horror stories about Kudrow not being fan friendly and 2) I was tired from spending all day at the Hollywood Collector’s Show. I honestly thought Kudrow’s negativity could influence Stone not to sign so I passed (something I have regretted since). Still, I managed to get the lead (Eisenberg) so I can’t complain. After all autograph adventures sure do have some interesting outcomes.  Until the next time, happy autograph hunting! 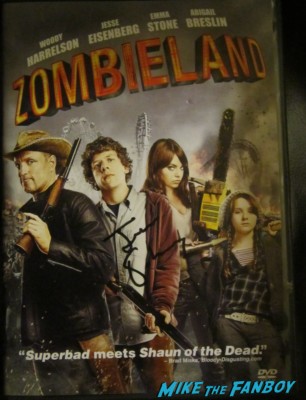