I have to tell you, I loved Forgetting Sarah Marshall the first time I saw it. Loved it. Yes, it stars Veronica Mars, AKA Kristen Bell and I love she played against type a little. But Mila Kunis was so good in this movie! It really popped her into the limelight!

Plus, everyone in the cast is pretty damn nice! Russell is getting a tad more difficult… When he’s not saying signing autographs is Boring! LOL… Something I will never forget! But still for the most part all of them are cool.

Jack is a huge Forgetting Sarah Marshall fan as well and has chosen FSM as this week Cult Classic Corner! Check it out after the jump!

Sometimes you have to make opportunities for yourself to succeed. Regardless if you’re an actor or recent college graduate, sometimes the person who best knows your talent is you. Like his mentor suggested, Jason Segel took Judd Apatow’s advice to create something for himself and wrote “Forgetting Sarah Marshall.”
“Forgetting Sarah Marshall” was one of those rare breed of films that seamlessly crossed comedy genres and was openly embraced as a funny date night film and hilarious comedy to check out with your friends. I was fortunate to check out the film early due to an advance screening and immediately fell in love. From first glance, it was abundantly obvious Russell Brand’s “Aldous Snow” was the “breakout star,” but it truly launched Jason Segel’s film career. Mila Kunis, Kristen Bell and Jonah Hill also provided memorable moments as their co-stars. 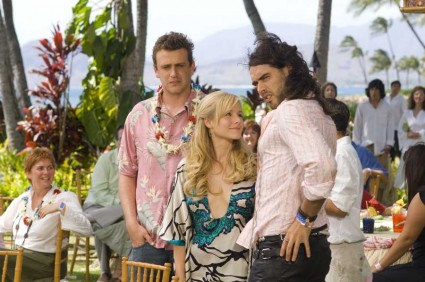 The film tells the story of composer Peter Brenner (Segel) and his five year relationship with TV star/co-worker Sarah Marshall, who stars on “Crime Scene: Scene of the Crime.” After getting word Sarah would be returning home, Peter decides to “freshen up for her” and takes a shower only to discover Sarah is waiting for him in the living room. Following one of the most iconic and hilarious breakup scenes ever, Peter decides to visit Hawaii after a series of one-night stands that are unable to cheer him up. 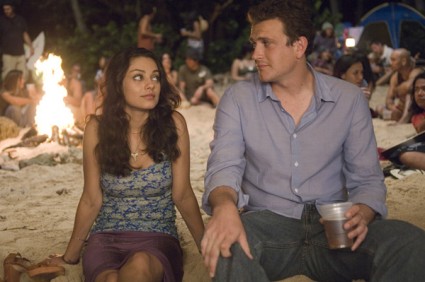 Peter spontaneously jumps on a plane and darts off for a Hawaii vacation. As he is checking into a hotel, Peter admits to the concierge, Rachel (Mila Kunis), that he completely “winged his trip” and is trying to get over a breakup. While talking with Rachel, he soon discovers Sarah is at the same exact resort with rockstar Aldous Snow (Russell Brand) and they soon exchange an awkward interaction in the hotel lobby. Feeling sorry for Peter, Rachel offers him an expensive suite for free on the condition he cleans up after himself. Soon Peter develops feelings for Rachel, but what happens when his ex starts feeling jealous? 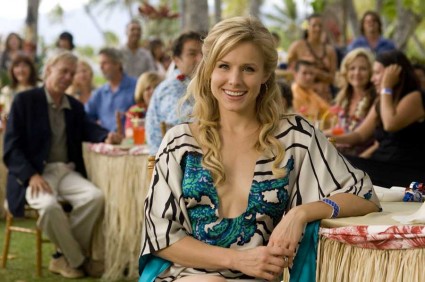 Throughout the film there are so many hilarious scenes, especially Russell singing “Inside Of You” to Sarah Marshall, Peter doing yoga, Peter’s drinking antics and of course the break up scene. However, the one scene I quote all the time is Peter doing his “Lord of The Rings” impression in green sweatpants. It remains one of my favorite recent cult classic comedies and is a comedy most people should check out.

Fortunately for me, I have met several of the cast members over the years and have been quite successful.
The first cast/crew I met was Jonah Hill and Judd Apatow (while they were promoting “Superbad” at Comic Con) and told them how much I loved the film and could hardly wait until its theatrical release. I have seen Judd several times since then, but I always feel weird asking a producer to sign stuff unless they “officially” wrote or directed the project. Jonah was great during his “Accepted” and “Superbad” days, but has become less fan-friendly since his Oscar nomination.

(Editor’s Note: Wait… Jonah has become less fan friendly? Really? I’m sure I heard that before… Considering he is my nemesis you would have thought I would… Huh!? M-)

Kristen Bell was the next one I met at Comic Con (the year prior before its theatrical release) and she was absolutely thrilled to hear someone discuss the film already. I told her how funny her interactions were with Aldous (Didn’t remember Russell’s name at the time) and the breakup scene would be one of those iconic film scenes for years. She was an absolute sweetheart when we took our picture together, but since Kristen is literally 13 inches shorter it was a challenge (even with me bending down) posing for a portrait shot. Since I had a ridiculously low-key, intimate moment meeting her I have yet to venture out for her again (even though Veronica Mars is one of my favorite shows of all time). 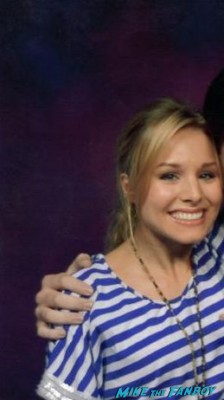 Now the two leads, Jason and Russell are two different stories. I met Jason at an Arclight Presents screening of “Forgetting Sarah Marshall” during its first week of release with Nicholas Stoller (Director) and him doing a Q&A afterwards. My friend Steve and I managed to take a picture with Jason and get our “Freaks and Geeks” and “Knocked Up” DVDs respectively signed. Jason was seriously the nicest guy and remains pretty down to earth. I later met him at Neil Patrick Harris’ star ceremony and finally received his autograph on some “Forgetting Sarah Marshall” memorabilia (a Blu-ray). 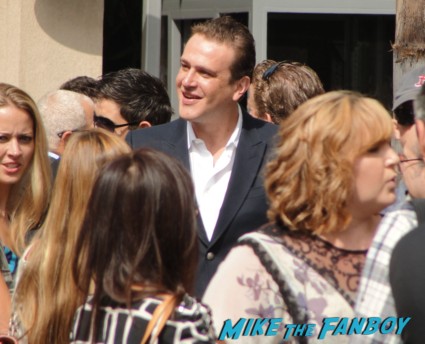 This time dealers in my area were quite pushy and my friend Steve and I received only one each, which was cool, but had trouble taking pictures due to the craziness. 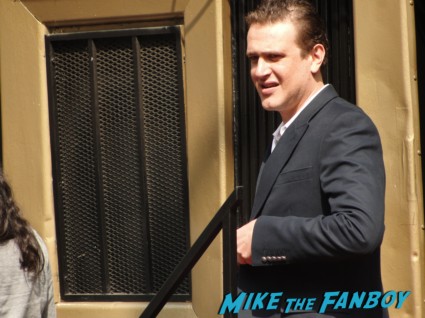 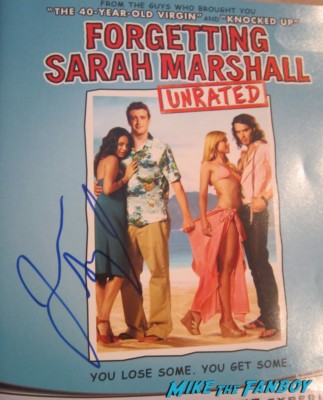 The first time I met Russell Brand was when he was promoting his book, “Booky Wook” at the Barnes & Noble at the Grove. My friend Jonathan and I underestimated the line and “barely” got squeezed into the line. I brought my “Forgetting Sarah Marshall” DVD cover, DVD slipcase and soundtrack booklet since Russell sings on two of the tracks. I gave my DVD cover to Jonathan so he had an extra item for him to keep if Russell signed additional stuff.

Russell was literally sitting on the table hugging and kissing people left and right when they approached him. As we slowly walked up to the table, we were told by staff Russell would only be signing his books, no personalizations, and no pictures were allowed. I can understand pictures (due to time constraints), but one additional item shouldn’t be a hassle. When they saw I had a DVD in my bag, security literally confiscated my bag and held it on the other side of the signing line “so I didn’t pull anything out last minute.”

Before getting in line I had decided to buy two books, one for myself and the other as a gift. I noticed the store handlers were stacking multiple books on top of each other and opened them up to the title page (or designated “signing page”) so it would be a quick sliding motion for Russell. I hate this because it ruins the spine of the book and you don’t even get to personally hand the celebrity your book, but in this case it worked to my advantage. I slipped my soundtrack booklet in the second/bottom dust jacket and gave the books to the handler, who then gave them to Russell and he placed them on his lap. When I mentioned we share the same birthday he personalized my book and added “star lovers.” 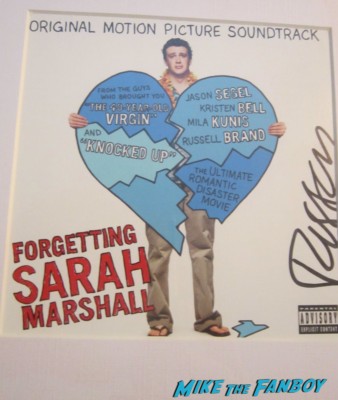 We shook hands and I waited for Jonathan. As Jonathan approached he whipped out the “Forgetting Sarah Marshall” cover and asked Russell to sign it before signing his book. Before security could stop him, Russell gladly grabbed it and signed both items without a care in the world. 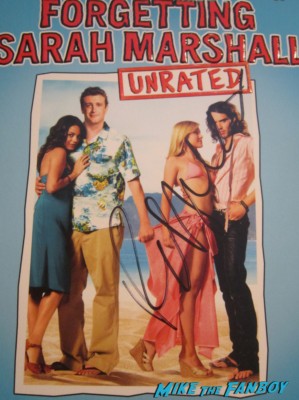 As we walked away, Jonathan handed me the cover and said “Thanks for inviting me. I’m sure you will appreciate it more.” I later met Russell at an advanced screening of “Arthur,” but it was nothing more than a brief exchange.

So over the years I have received two photos with Kristen Bell and Jason Segel and have three different “Forgetting Sarah Marshall” pieces of autographed memorabilia (DVD cover, soundtrack and Blu-ray) signed by Jason Segel and Russell Brand. Hopefully, one day I can slowly start adding more cast members, but for now I’m completely content with my mementos. Until the next time, happy autograph hunting!