The best thing about Cult Classic Corner? The fact that I get to experience new films that either were under my radar or I missed entirely.

A lot of times I say to myself, oh yeah, I know that one! Or, I’ve heard about that movie, but never saw it! Today’s Cult Classic Corner has me befuddled… I’m never heard of this movie or knew it existed!

and I love Luc Besson! Who knew!

Check out this week’s CCC below!

Luc Besson is one of my favorite filmmakers. Not only does he constantly create cool movies like “The Professional,” “The Fifth Element,” Taxi,” etc., but he writes awesome things like the “Transporter” series. Over the years, Besson remains one of the busiest writer/director/producers in the world. This weekend, his latest film, “The Family” comes out with Robert De Niro and Michelle Pfeiffer (Yes, Mike you can SWOON). I decided to revisit one of my personal favorites from his filmography, “Angel-A.” 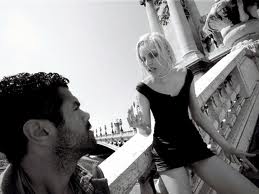 “Angel-A” tells the story of a complete loser, Andre, who returns to Paris in search of making some quick money and start life anew in America. However, his efforts proof fruitless as he is unable to overcome his life of pretty crime and decides to end his life by jumping into the river. 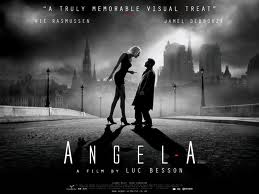 All of a sudden, a stunning, svelte blonde Angela (former Victoria Secret’s model Rie Rasmussen) drops out of heaven into the river while attempting suicide. Disregarding his own attempt, Andre rescues her and soon discovers this mysterious blonde is more than meets the eye when she agrees to help him complete task throughout the city. 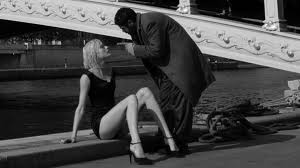 This fantasy film fulfills all your needs with an amazing and entertaining story that will leave you wanting more. Honestly, I think its one of the most underrated films in the past decade. If you enjoy French films and can appreciate Black & White cinematography, this film should be on your radar!

A few years ago, Rie Rasmussen was promoting her directorial debut, “Human Zoo” at the New Beverly Cinema and hosted several screenings. I was fortunate to attend one of the screenings and meet her afterwards. She was a complete sweetheart and we managed to discuss both films at great length. The cool thing was a few months after that I managed to randomly bump into her at one of my favorite restaurants in Los Angeles. Not only was she happy to meet me and discuss “Human Zoo” and “Angel-A,” but also actually went out of her way to say goodbye when she left the restaurant (We were the only two parties inside). Thanks Rie for being so awesome and it never hurts to expand your film repertoire. Until the next time, happy autograph hunting! 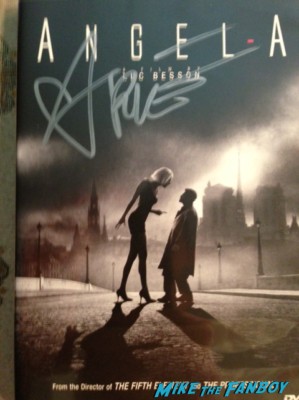