You know I have to tell you, I’m a little jealous of Daniel! He just met Naked Gun star Priscilla Presley but most importantly Warwick Davis! Now, Warwick has been in everything! Willow, Star Wars, I mean the man has worked so much it’s crazy.

Both Priscilla Presley and Warwick Davis were doing a play at the Wimbledon Theatre in London and Daniel headed out to try and meet them.

Check out Daniel’s full recap after the jump!

Hey guys, I thought that I would share my story of meeting Warwick Davis and Priscilla Presley when they were at my local theatre, New Wimbledon Theatre, near London! They were in my local pantomime show, ‘Snow White and the Seven Dwarves’ which attracts big names each year, from Pamela Anderson to David Hasslehoff to Jerry Springer. I am a big fan of Warwick, for his roles in Star Wars, Harry Potter and the latest TV show ‘An Idiot Abroad 3′. I also thought this was a great opportunity to meet Elvis’ wife Priscilla, who had been in Dallas and the Naked Gun films.

Here we go, a few months ago, I heard that Warwick Davis and Priscilla Presley were coming down to my local theatre. I thought this was great news, as I had never met both of these before and this was a great chance at a theatre that I know very well! I decided to go down to the show about halfway during its just over a month spell. I saw that the show ended at 9.30pm and was on for 2 hours, which I thought was a good time, since most shows here finish around 10.30pm-11pm. I get to the stage door at around 9.15pm, where there are around 2 or 3 people waiting.

At 9.30pm, I hear that the show is over and all the people leave the theatre that have seen the show. A woman then begins to talk to me about how she enjoyed the show and how much she looked forward to meeting Priscilla and had been to Memphis. Anyway, a few cast members begin to leave the show, and there must be at least 40 people who are now waiting! Also, the other side of me, is a woman who’s asking everyone who’s leaving the stage door, to sign her programme. This woman is crazy, she’s asking lighting, sound and stage crew to sign her programme, crazzzyyy! At least save some room for Priscilla and Warwick to sign your programme!

At around 9.45pm, the stage door opens and I can see a small shadow, then out comes Warwick! Wow I must say seeing him in the flesh, I didn’t expect him to be this tiny! I have a 16×12 photo of the cast members from the show, this picture must be as big as Warwick lol. Anyway, he signs my photo and I have a photo with him! Warwick then signs for everyone who wants for his autograph and then heads back inside to go around to his taxi. 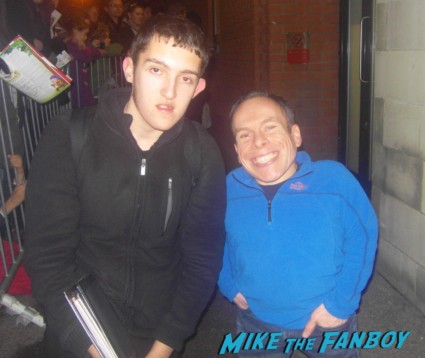 About 5 mins later, the stage door opens again and out comes Priscilla. Wow, seeing her in the flesh is quite a surprise too, I never realized how much plastic surgery she has had, her faces looks like plastic! 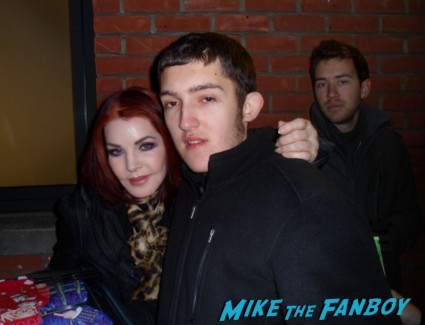 Anyway, enough of me being harsh, she is lovely and signs for people that want her autograph. I manage to get her to sign my 16×12 photo and a 12×8 photo. I also manage to get a picture with her. 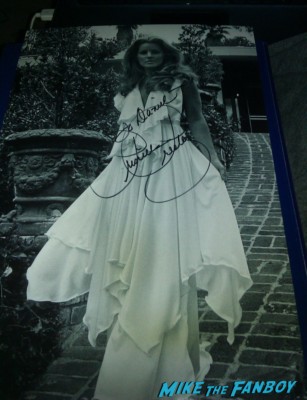 Lastly out, was Jarred Christmas (seriously this is his real name! He’s a New Zealand Comedian) I needed him to complete my 16×12 photo, so he kindly signs it and has some pictures with the fans who are waiting for him. I thought I would grab a photo with him to finish the set! 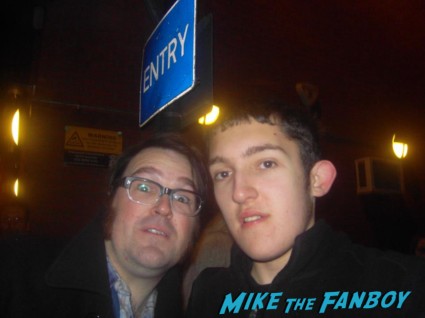 I must say that was a great experience, meeting the cast was such a pleasure, they were nice and had time for the people that were waiting in the cold, also the younger fans that went along to see the show, very pleased indeed!

Until next time folks… 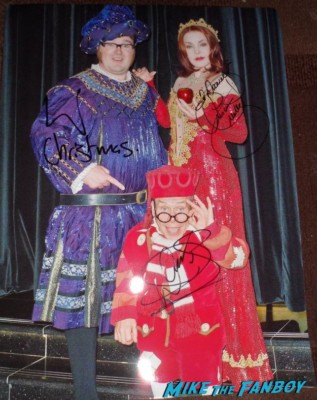