It’s always good to hear from Daniel one our peeps on the other side of the pond! It seems like it’s been forever, you might remember Daniel did the great report about meeting Roger Moore at his book signing a little bit back.

Today Daniel is heading out in the cold winter for pop sensations Lawson. For those of you who are not familiar with Lawson they are a pop band who is just bursting forth on the scene. Remember when The Wanted was just starting out? Yep, sort of the same thing.

Daniel was lucky enough to meet the band after their latest performance at Radio 2!

Hi Guys, hope everyone had a good Christmas and New Year! Haven’t been up to a lot lately with this dreaded snow and cold nights, not fun for collecting autographs in. Anyway, I thought I would share my story from meeting the group Lawson here in London about 2 weeks ago. Lawson is an upcoming group here in the UK and sang ‘Standing in the Dark’ if anyone has heard it before.

Here we go; I was around the corner at Radio 4 in London, where I met Timothy Spall, who you might know from the Harry Potter films. I was also going round to meet English comedian Sarah Millican, who you yanks probably haven’t heard of before! 🙂 Anyway, I saw there were some railings up at Radio 2 and there was around 10-15 girls, so I thought hmmm whats going on here. So, I asked the girls who they were waiting for and they said Lawson, I thought why not meet an upcoming music group, you never know, they could be the next One Direction!

Since it was cold, I done some trips between various locations to see who I could meet, I met Timothy Spall, then headed around the corner to meet Sarah Millican and Lisa Riley. I went off to meet them and then came back past the radio station on the way back to the tube station. Then, I saw that the girls still were standing here and Lawson just had finished on the radio, so decided to grab a space by the barriers.

First to come out was Joel, he spent around 10-15 mins chatting to the girls, taking photos and speaking to friends on the phone. When he finally got down to me, I got a piece of A4 photo paper signed (had nothing else as didn’t expect to see them!). I also had a picture with him and he seemed to appreciate the fans waiting for him in this cold weather. 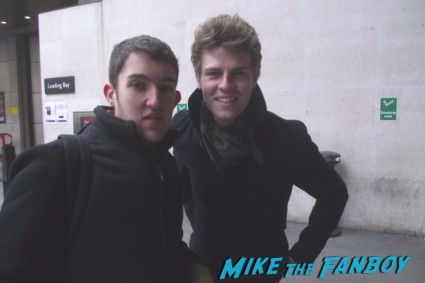 Second out were Andy and Adam, they also spent around 10-15 chatting to the girls, doing the same as Joel did. They also added to my A4 photo paper and I also had a picture with both of them. 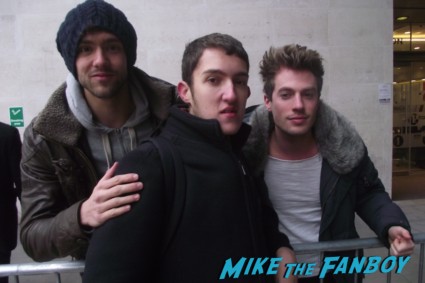 Lastly, out come was Ryan and he also went over to the girls for around 10 mins, doing the same. He completed my A4 piece of paper and I also had a photo with him to complete the set! 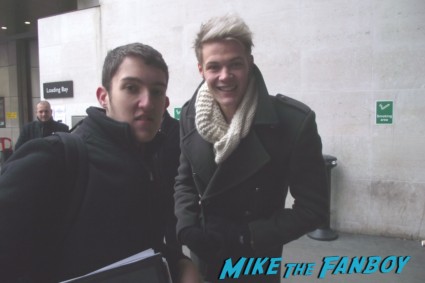 I have to say they were one of the nicest groups of people that I have ever met, signed everything that people had for them, made the time to be with their fans and I really hope they make it somewhere in the music world of today. I’ve met The Wanted before, but I found that Lawson were more calmed and relaxed.

That’s all for now! 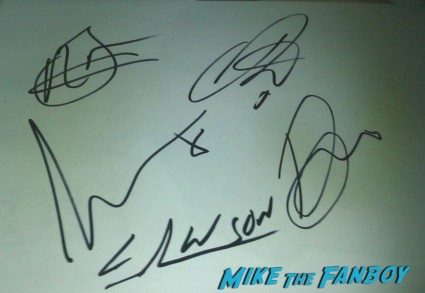