Home / Ace • Q and A / Danny Elfman! Ace Meets The Legendary Composer And Oingo Boingo Frontman At A Q And A! Autograph Goodness!

What’s up autograph fanatics! Ace here with my recap of meeting Danny Elfman…

While others wouldn’t see the value in going for a composer or extra or a character actor, I think sometimes its cooler than getting an A-Lister.

Danny Elfman is a legendary composer and has composed countless of iconic musical pieces for films and TV shows.

Among his credits are the theme song for the Simpsons and Desperate Housewives, as well as musical scores for Batman, Beetlejuice, Edward Scissorhands, Mars Attacks!, Mission Impossible, Men In Black, Good Will Hunting, Sleepy Hallow, Corpse Bride, Alice In Wonderland, and many other remarkable films.

While he has done many tremendous films, the one movie that, for me, departs from the rest would be the Nightmare Before Christmas. He is the singing voice of Jack Skellington and if you have seen the movie, you know that he is one of the most integral parts of the movie. The soundtrack still resonates with me…

Therefore, when people hear of a rare appearance it draws out the crowds.

Honestly, it wasn’t as bad as everyone claimed it was that day. Now, don’t misunderstand me. It was bad… It was crazy… But, it could have been a lot worse.

We showed up around an hour before the screening and waited until he arrived along with another 10-15 fans. I honestly had never gotten him before, hence why we would rather come early and not miss him, than show up late and hear through the grapevine that he signed.

So after a couple hours of fans talking, a couple suspenseful cars passed by. Finally, the car arrived to drop off Danny Elfman. We all motioned another fan to open the gate. As he opened the gate, a crowd of collectors who apparently were waiting on the other end rushed within the parking lot. There had be another crowd of 15 people… Of course!

Therefore, everyone who waited patiently at the fence ran to join the crowd.

The suspense rises. I am just hoping that Elfman doesn’t jump out of the car, in the middle of the parking lot, to join the crowd of fans.

That’s exactly what happens though. Of course, no one would line up. I wasn’t going to stand back and hope if I wait my turn that life would reward me for being more restrained.

Life sucks. Just the way it is. Regardless, it only took minutes before he was surrounded. 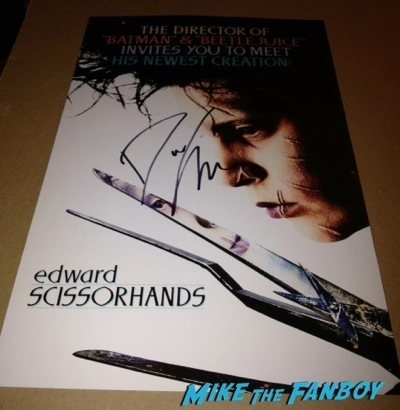 His friend/publicist/assistant attempted to control the crowd. I was worried that someone would fling a board into Danny’s face that would prevent him from getting to everyone. 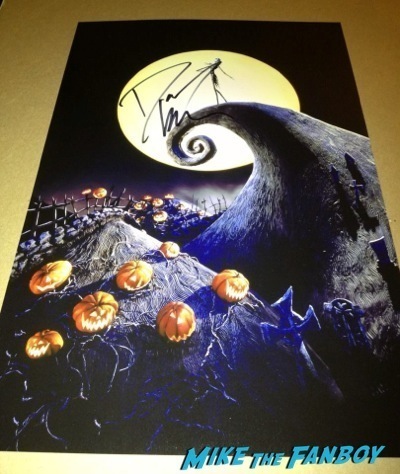 Then he signed another ten before he signed my Mars Attacks! mini-poster that already had Pierce Brosnan on it. 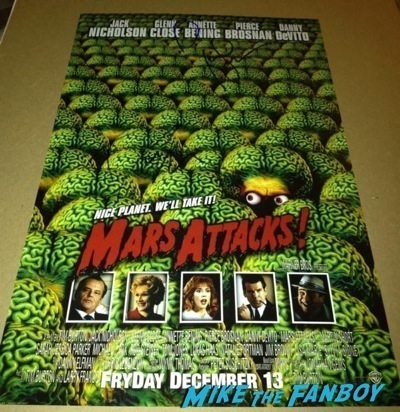 Danny was so nice. He kept spinning, signing as many as possible until the numbers dispersed. 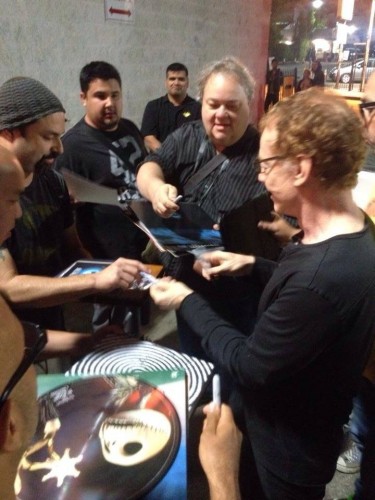 He then signed my Sleepy Hallow mini-poster within the moon. He had incredible placement from what I saw. Despite the crowd, he remained cool and tried to sign things perfectly. 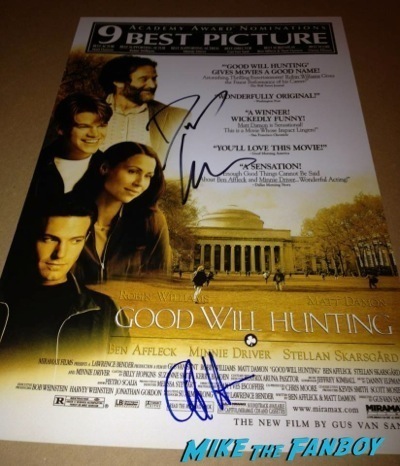 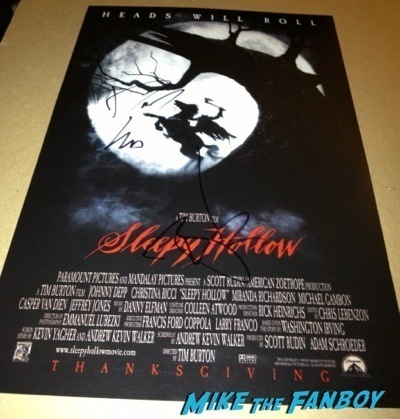 He did not say much but he kept a smile on his face the whole time.

He had three different pens in his hand as the time passed. Picking up pens along the way. Switching as people asked.

I added him on Edward Scissorhands and Good Will Hunting. After ten to fifteen minutes of signing, he went on his way happily into the screening room. 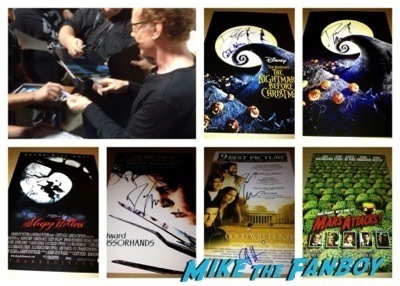