David Duchovny is one of the most unique and interesting actors of his generation.

Paul headed to his book signing for Bucky F*cking Dent and had an awesome time meeting The X-Files star.

What a great way to end the longest day of the year and most aggravating.

No thanks to Maria “lady dynamite” Bamford who pissed me off to the point that I contacted her manager about how she refused to come over for her only fan while at a talk show.

Anyways, I arrived at the grove around 7:15pm in dire need of coffee and some interaction with one of my favorite actors/musicians/writers David Duchovny! Earlier I purchased his books and secured my place towards the front of the line (section c). 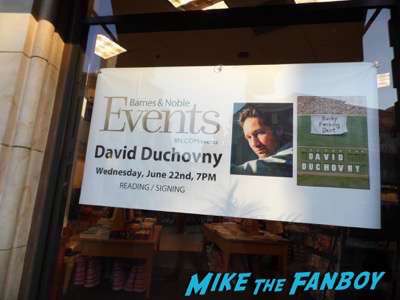 I was embraced by his great voice talking about the story of Bucky Dent. I was being being helped to my section by security (who were pleasant and friendly), I asked if I had time to visit b&n Starbucks and the guard said “sure he’ll be talking for a while’ so I got an Americano and enjoyed it while listening to him field questions. Now, I’ve met David a handful of times and he’s really cool and down to earth so it was a very laid back encounter but this time I brought him a gift… a photo I took at his walk of a fame ceremony. 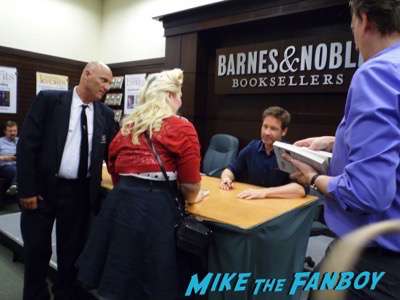 The line moved along pretty quickly kinda reminded me of when William Shatner had his signing there, before you know it I was right in front of David who quickly signed the books. Then I gave him the photo and he started a conversation about that day after complimenting the photo. I told him I was the only person to approach Gary Shandling after the ceremony and got a photo with him and he was touched by that (David got his start on the Larry sanders show) then it was over and off to work I went.