When it comes to children’s movie franchises, it’s hard to imagine a world where Despicable Me hasn’t unleashed a world of Minions onto the world. It’s become a phenomena and in this day and age that’s no easy feat. Not only is if difficult to create an original character but to make that film into a series is almost impossible. Yet, Universal has done just that with the Despicable Me series. 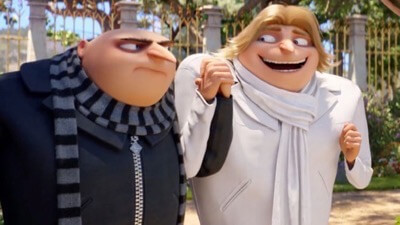 Despicable Me 3, out now on Blu-ray and DVD, is the next chapter in the series and is a fun and funny chapter in the series. A child actor, Balthazar Bratt (Trey Parker) his a growth spurt and is no longer the draw he once was. His face is breaking out into acne and while his character is evil on his series, Balthazar starts to embrace this persona as he grows up.

Balthazar over time becomes one of the biggest criminals and hatches a plan to steal a priceless diamond. This is foiled thanks to Gru (Steve Carell) and his wife Lucy (Kristen Wiig) along with some of the Minions. Balthazar escapes and because of this Gru and Lucy are kicked out of the anti-villain league. However, Gru is given a second chance after learning he has a lost twin brother named Dru (Steve Carell).

Gru finds himself alone with only a couple Minions who have been upset by him not being evil enough. He now has to figure out a way to stop Balthazar, get back into the League and get all his Minions back. Not an easy task to be sure, but Gru is up for the challenge. 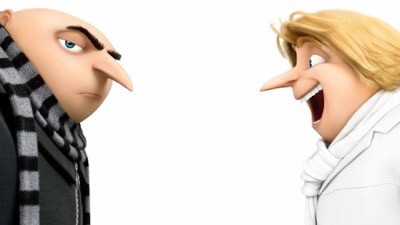 Despicable Me amps up the humor with each character given a lot to work with and a top notch script. The film still puts Gru in the center stage and his push and pull between good and evil. It’s a great lesson for kids to learn especially these days, that good and bad is really a thin line. 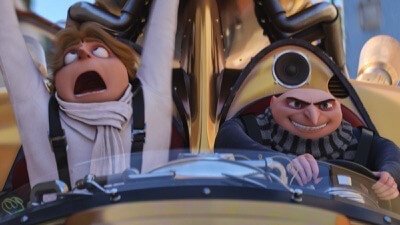 Despicable Me 3 arrives on Blu-ray in a fine transfer thanks to Universal Home Video. The quality is outstanding, animation really excels on high definition and here it’s a wonderful example of the power of blu-ray. The colors are so vibrant and pristine it’s hard not to enjoy a film with picture quality this exceptional. It’s shockingly clear with zero fallout. The textures are outstanding and the film in enhanced by the picture quality.

The Despicable Me 3 Blu-ray comes packed with special features.

Mini-Movie: The Secret Life of Kyle – This is a fun mini short featuring Gru’s pet dog.

Deleted Scene with Intro by Dana Gaier – This was okay, not necessary and one can see why it was cut.

Minion Moments  – these are a few shorts with the Minions. Worth a look.

Character Profiles – A look at the different voice actors in the film including Steve Carell and Kristin Wiig.

The Making of Despicable Me 3 – Standard EPK feature but if you’re a fan of the film, check it out. Some of the voice actors, directors and more are featured.

The AVL Files – This featurette allows the viewer to choose which character they want to learn more about. Pretty cool.

Freedonia Visitors Guide – This is another interactive feature where people can click on locations from the film and learn more.

Despicable Me TV – A series of fun ads created about the film.

“Doowit” Sing-Along – This is a fun sing along video.

Wanted Posters – a series of Wanted posters featuring the Minions. 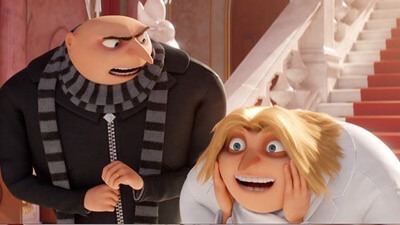 Overall, Despicable Me 3 is a fine addition to the franchise. It’s full of humor and adds a new element with different characters and yes lot of Minions. The quality of the blu-ray’s picture is amazing and worth every penny. It’s a great film that the family can enjoy over the holidays. Highly Recommended!

Despicable Me 3 is out now on blu-ray!