I have to tell you, I love watching older movies on Blu Ray. I love it when studios take the time and transfer titles correctly. It’s a treat to see older movies you fell in love with restored to their original glory.

This is the case with Dick Tracy, just released on blu ray. It’s titles like these that should be preserved and restored! I love seeing movies I’ve grown up with given the love and care that they deserve.

Scott took Dick Tracy for a spin and fell in love with it just like the first time he saw it in theaters! Check out his full review after the jump!

I remember seeing DICK TRACY opening weekend. It was June 1990 a few summers after Tim Burton had reworked BATMAN. I went in expecting the same sort of movie. What I got instead was not a re-imagining of a great comic book character but instead I was treated to a live action comic book movie. A stylized homage to the 1930’s comic strip.

Instantly, from the first clip, you are transported into a the comic world. Warren Beatty, director and star, insisted the palette be limited to 7 colors to evoke the films comic strip origin. The use of matte paintings mixed with live action in combination with still camera work all help create the illusion of watching a live action comic on screen. 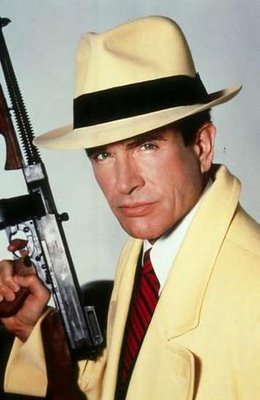 What makes Dick Tracy different from other heroes (super or not) is that Tracy himself is not that interesting. Luckily Beatty’s square jawed detective is surrounded by a colorful cast of supporting characters. Charlie Korsmo as the kid. A scrawny street orphan who is tough as nails. Glenne Headly as Tess Trueheart. Dick Tracy’s girlfriend who is always trying to convince Tracy to enjoy life and settle down. DIck Van Dyke as District Attorney John Fletcher, Dustin Hoffman as Mumbles, Mandy Patinkin as 88 Keys, James Caan as Spud Spaldoni, the supporting cast goes on and on. Each with scene stealing performances, sharp one-liners, and amazing prosthetics and make-up (especially when you consider it was made in 1990). The movie really comes to life when Al Paccino and Madonna show up. Both bringing life and depth to what could have been one dimensional characters. 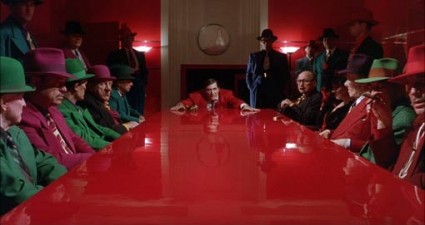 Paccino’s Big Boy Caprice is Tracy’s main antagonist. He is the cities leading crime boss. His minions rob and murder at his whim. His criminal empire speeds through the city like a cancer. Cross him, and pay the price (often paid with “the bath”, a nasty way to go involving cement, a box, and a long drop into a deep river). Big Boy runs the Club Ritz where Breathless Mahoney performs. 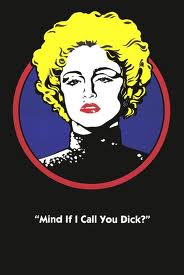 Breathless, played superbly by Madonna, is the films femme fatale. She slinks and purrs her way through every scene. She brings the obvious sexiness needed for the character but also gives her depth and sadness. Her musical numbers also bring needed life to a story that can, at times, drag a bit. 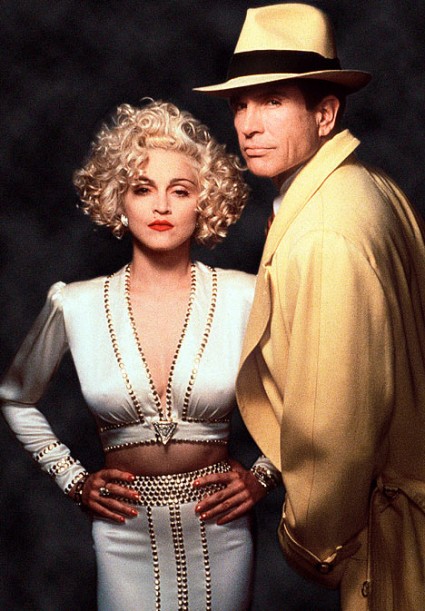 The movie begins with the kid witnessing a shooting of a group of mobsters at an illegal card game by “Big Boy” Caprice. Big Boy wants to be the head of the entire mob scene in town. He begins his takeover by killing Lips Manlis and taking over the Club Ritz where Lips’ girlfriend, the seductive and sultry singer, Breathless Mahoney performs. After Lips is reported missing, Tracy interrogates his three hired guns Flattop, Itchy, and Mumbles, then goes to the club to arrest Big Boy for Lips’ murder. 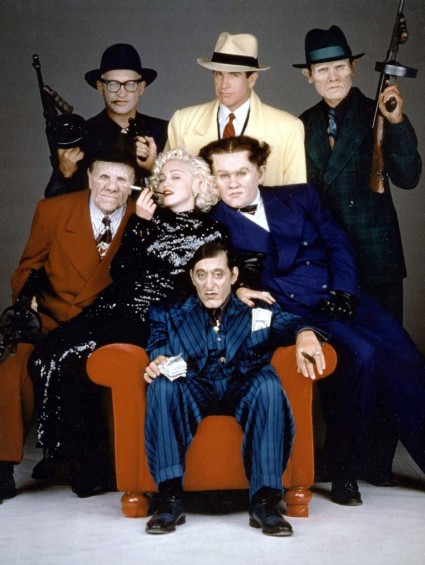 Breathless is the only witness. Instead of providing testimony, she unsuccessfully attempts to seduce Tracy. Tracy tries again to get the testimony from Breathless he needs to put Big Boy away. She agrees to testify only if Tracy agrees to give in to her advances. He resists, despite his growing attraction. Tracy leads a seemingly unsuccessful raid on Club Ritz, but it’s actually a diversion so officers can enter the building install a listening device so the police can hear in on Big Boy’s criminal activities. The resultant raids all but wipe out Big Boy’s criminal empire. Ultimately Big Boy discovers the bug. In the resulting gun battle, a figure with no face (known as “The Blank”) is introduced. Later Tracy falls victim to another trap. He is drugged by The Blank and framed for the murder of corrupt District Attorney John Fletcher. 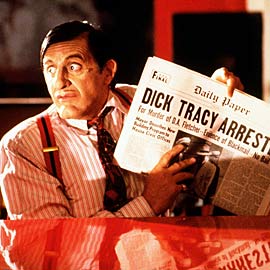 Big Boy, now back in business, is also framed by “The Blank”, in this case for Tess’ kidnapping. Released from jail on New Year’s Eve, Tracy goes after Big Boy and with the help of “The Blank”, rescues Tess and shoots Big Boy.

The film holds up well if you view it knowing that it is a comic book movie. Pay close attention to the details especially on blu ray, the colors are pristine. The sets and art direction are incredible. I owned an old copy of 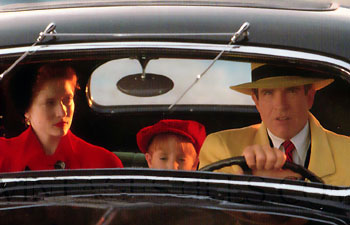 Dick Tracy on VHS and this is the first time I have been able to see the film in all it’s vivid glory just like it was back in the theaters.

My only complaint it the lack of extras! Surely there must have been some making of specials or cast interviews around the time of this film. Including those would have made this release even more well rounded and superb. 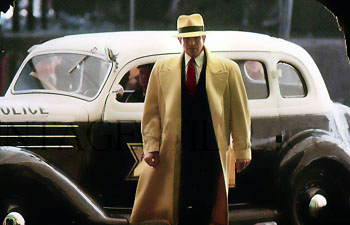 Still the picture quality and transfer is fantastic. I’m so glad that Touchstone/Disney is giving some time to clean up their older catalog titles, for movie fans it makes all the difference in the world!

Dick Tracy is out now on Blu Ray combo pack! 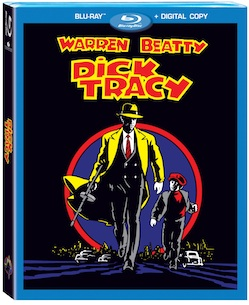