Oh dear, Billy Beer… Billy has been out of commission as of late, you see, we’ve missed the Hollywood terror around these parts as Billy Beer has himself a new job and has moved far, far away.

In all honesty, I miss Billy a lot! He’s a great guy but I’m happy that he really loves his new job. Billy did make it back for none other than Ms. Drew Barrymore’s book signing. Nice!

Billy Beer is back!
Tell a friend!

Welcome back to Billy Beer’s Barstool. That’s right, the Beer is Back! Sorry it’s been so long people, but somebody got a new job. Now that I’m not able to go to every single event in Hollywood, or as I like to call it, save a spot for Mike the Fanboy at every event in Hollywood.

I have to pick and choose me events. I decided to drive back into town on a very busy day in Hollywood. Meryl Streep was getting ready to diss her fans once again. Or there was the Jack Ryan premiere which hell froze over at, cause Kiera Knightly was actually nice to people.

But I had something else in mind. Mike sometimes talks about his first crush Ms. MLP. Well mine came in the form of a pig-tailed blonde who screamed at aliens. Ms. Drew Barrymore! OK, maybe not when she was that young, but let’s just say I might have had pictures of her up on my wall later on as a kid.

(Editor’s Note: Billy, this is not that kind of website. M-)

Anyway, she was doing a book signing in LA, so I got in my car and made that new 100 mile trek to see my Angel.

First of all, I was a little worried, cause the book signing started at 7, and I finally arrived at 6:45. They said I was on stand-by which I felt shouldn’t be too bad, but since I drove 3 hours, I didn’t want to risk it. Luckily I saw fanboy Paul upstairs. I yelled up to him to see if he had any extra wristbands, and luckily the guy next to him had one, SCORE!

After waiting around a while, you could tell she was there, but the line wasn’t moving very fast. Finally, we get to go up to the 3rd floor. There she was, looking super cute in her shirt with little hearts. It looks like she’s actually talking to people which is cool. But there’s no photos allowed once you get up to the stage. 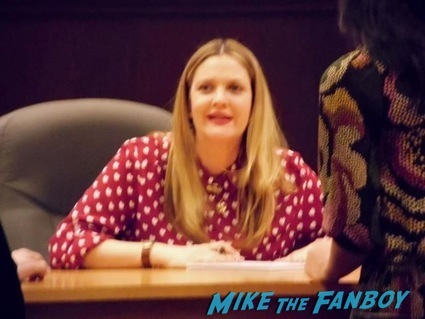 After a little bit of positioning to make sure we can get pictures taken, we finally get up there. Paul talks to her for a little bit, then the guy in front of me goes up. I thought it was going to be quick, but he wouldn’t stop talking. Even when he was walking away. She had actually signed my first book before she even looked at me. I said “hello” at first, but she was still talking to the guy. 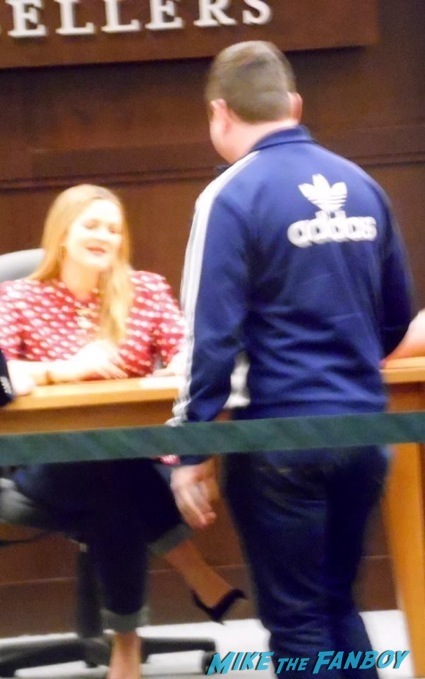 Finally I have her attention, and I say “Hello my first crush ever”. Luckily she was flattered by this comment and not creeped out. Then I tell her that Whip It is still a guilty pleasure of mine. That’s when a switch turned in her brain, and she went from smile for the cameras Drew to normal talk out of the side of my mouth Drew. She was so grateful of my comment. She was telling me thank you so much for that and how much it meant to her. She was telling me how much work it took.

Now I’ve turned into the guy in front of me. I didn’t care, this was my moment. She thanked me again, and I was on my way.

Totally worth the drive! Until next time!