Her name is Rio and she dances on the sand..

Pinky loves a lot of people, she loves people in film, television, the 80’s, etc… However, there’s no one she loves more than Duran Duran!

Pinky recently met Nick Rhodes and she was able to get him to finish her tattoo. She was more than a little happy, I tell you!

Hello, my lovelies. Pinky Lovejoy-Coogan here still on a high from my amazing Duran Duran encounters last week. Although I knew I’d be seeing them perform at The Music of David Lynch concert, I never imagined that I’d have such fortuitous luck when it came to seeing my true love, Nick Rhodes, and getting his picture and autographs. For those unfamiliar with my 30 year love affair with Nick, I first recounted it on this very site back in 2011. The article can be viewed here!

Last Monday night was just supposed to be a lazy night in, as we were recovering from the never-ending cold that’s been afflicting the Coogan household. We’d eaten dinner, were in our pajamas, and chilling out with the TV when suddenly I started to see images on Twitter referring to a Duran Duran signing party. Not only were there pictures from the party, but they were talking about the band meeting their new label (Warner Brothers Records) and saying they were sending out the information live. 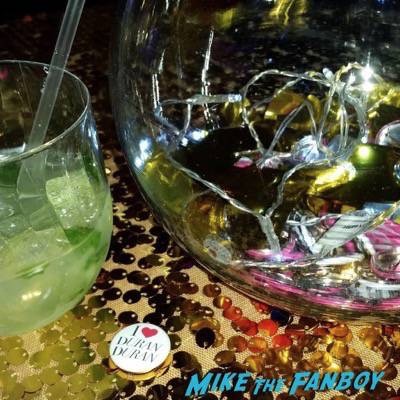 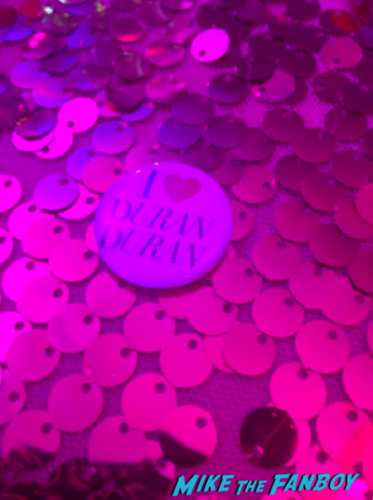 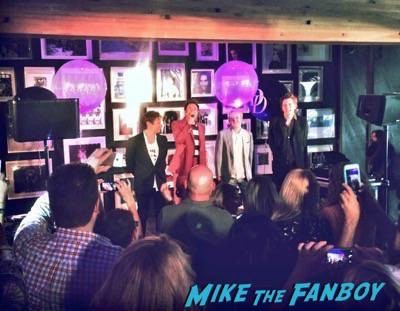 So, I was just looking at the pictures and wondering where it was when it occurred to me that Warner Brothers is RIGHT DOWN THE STREET. Like, literally, a mile or so from our house. I asked Keith where it was and he confirmed how close it was.

Before Keith could even say, “What’s going on?” I was dressed and about to jump in my car. I grabbed the few prime items I’d been wanting Nick to sign and was on my way. Although I had no idea if it was even accessible, I figured I had to try, right? I mean, for all I knew, it was going to be a huge bust, but I was too close not to try. Plus, let’s face it, we all know I’ve gone much farther and done much crazier things in my quest to meet Duran Duran (don’t judge me).

When I got there, I was shocked that it was such an open building; no security, parking right out front, and these huge Duran Duran balloons which let me know I was in the right place. 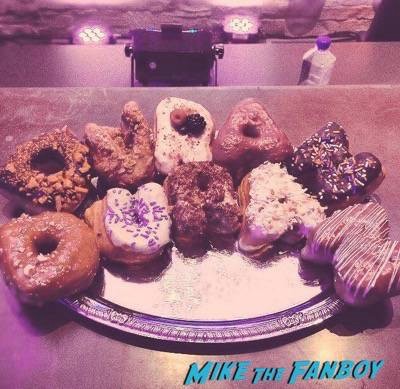 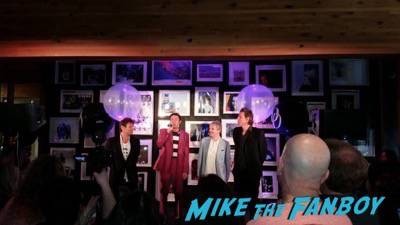 I looked inside the glass walls and saw my beloved band members RIGHT THERE. I probably could have walked right in and no one would’ve stopped me, but I had these amazing items with me and felt like that might make me stand out like a dork (not to mention I’d lose my ability to speak and then stand out even more). Plus, let’s be honest, I’m a big chicken. 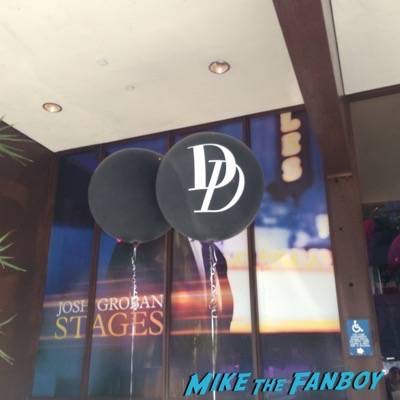 After a little while, I didn’t see the band members inside anymore. The party seemed to be winding down, so I started to look around and figure out where they’d leave from. Would they leave from the front? Would they leave from the side? I didn’t see any cars ready to shuttle them off, so I was at a loss as to where to stand. Finally I decided to go a little off to the side since I could cover both the side and the front (although I was a bit far from the front). Not long after I decided where to stand, some adorable girls walked my way who worked for WB. One of them was carrying a balloon from the party. At first I thought they were going to bust me or ask me what I was doing, and then I saw them squeal with joy and I realized they were my people: fellow Duranies! We instantly bonded and they were the coolest – even sharing buttons with me from the party! They thought the band would leave from the side, so it surprised all of us when I suddenly saw a tuft of Nick’s blonde hair and a few of the band members leaving from the front (which was about half a block away from where we were standing). Not wanting to lose my chance, I started running down the street as fast as I could screaming, “Nick! Nick!” Yeah, subtle I’m not. But, thankfully, Nick was nice enough to wait for me (while other band members were already in the van – why didn’t I ask them, too?! I’m kicking myself now) and then signed the laser disc, the Interview magazine from 1985 in mint condition, 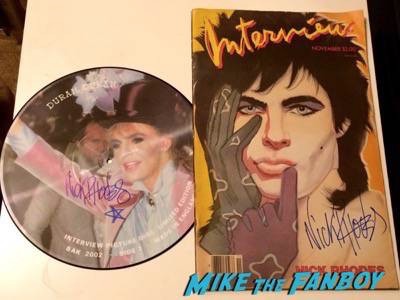 took a picture with me (despite how much my hands were shaking), and then, finally, finishing my tattoo!!! 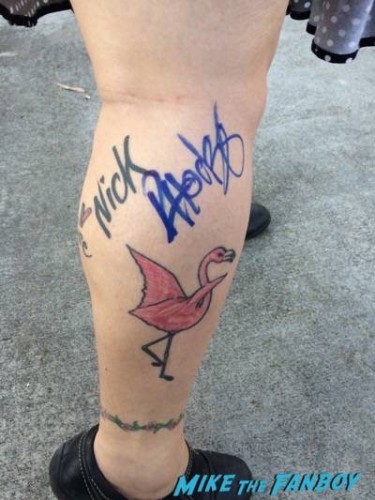 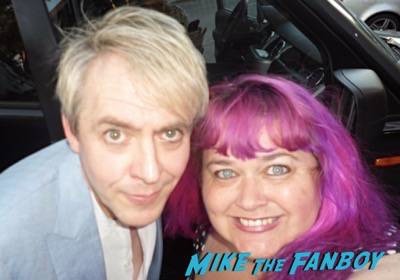 As you may recall, the last time I had Nick sign my leg, he only signed, “Nick,” which has driven me crazy ever since. I didn’t realize when he was signing it that he hadn’t added the Rhodes until it was too late, so I’ve been waiting until the perfect opportunity to get it finished. Sure, I could have pulled the “Rhodes” off another autograph, but I really wanted it to be authentic (especially considering it’s the only autograph I want tattooed on my body). So, last Monday, he finally added the Rhodes! Hooray! Of course I had to have it tattooed immediately, as I’d been waiting almost five years for the additional name. My new friends pointed me in the direction of their fave tattoo place and off I went. 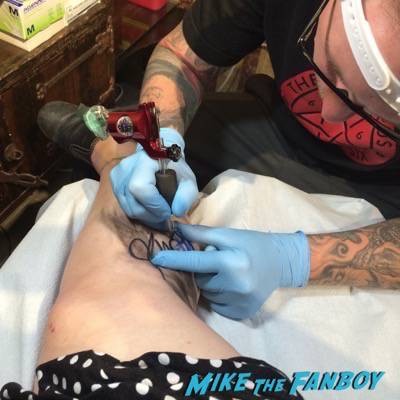 The only thing I’m regretting now, of course, is that I didn’t even look to see what other band members were in the van. Was it two of them? Was it three of them? Were ALL FOUR being transported in the same van?!?! You see, my big “bucket list” item of life is to get a picture with the entire band all together – I’ve met them all separately (which only took me over 20 years), but to have them all together in one shot with me would be my dream. What if that was my big shot and I totally missed it? Then again, they could have royally turned me down and then I’d be heartbroken, but I was in such a Nick haze I didn’t even check! Bugger.

Finally, here’s a collage I put together of all the fun stuff that happened last week, well, last Monday, that is. To make things even better, I was able to get another picture with Nick after the concert on Wednesday. Score! The pink tie makes it my fave pic to date. I still can’t believe how well everything turned out – the fact that it was so unplanned made it even better! I’m SO excited! Thanks, Nick, for making my whole week! 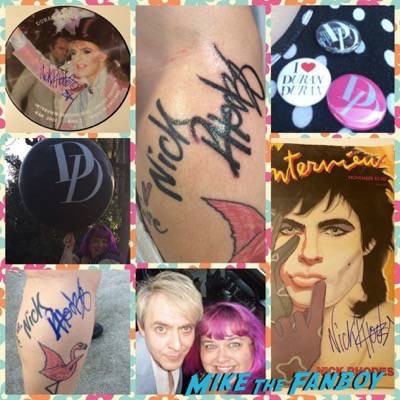 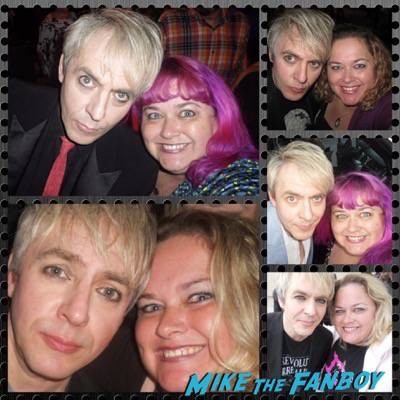