Home / Columns • Lindsay / Lindsay Heads To The Big Apple And Gets Dissed By Phoebe Cates But Gets A Cup Of Java With Edward Norton? Say Wha!?!

One of my favorite peeps in the whole wide world is Lindsay from iamnotastalker.com! She’s so much fun and awesome to boot. Plus, if you haven’t checked out her site yet, I have no idea what you are waiting for. That sounds like a Gwen Stefani song… Whatcha Wait’n For… Sorry, I’m apparently digressing.

Lindsay was out and about in New York and had two rather interesting encounters. A nasty experience with Phoebe Cates from Gremlins and… Wait for it… A wonderful moment with Edward Norton!

Check out Lindsay’s recap below and again her site at www.iamnotastalker.com!

Sometimes going into a celebrity encounter blissfully unaware of said celebrity’s reputation is a good thing. This was one of those occasions. My husband and I recently returned from a whirlwind weeklong trip to New York, where we met up with our friends Lavonna, Kim and Katie who live in the Midwest. One morning, while Kim and Katie took in a Broadway show, Lavonna, my husband and I headed out to do some shopping and location stalking. One spot on our list was Blue Tree, the Upper East Side gift shop owned by Phoebe Cates. For those for whom the name Phoebe Cates does not ring a bell, she is the actress who portrayed Linda Barrett, aka the red-bikini-clad brunette who flashed her tatas poolside in the 1982 classic Fast Times at Ridgemont High. I’ve never been a huge fan of Phoebe’s (heck, I only just recently saw Fast Times for the first time), but her store looked fun and all of the write-ups I saw said she was onsite most days, so I figured it was worth a drop-by. I was wrong. 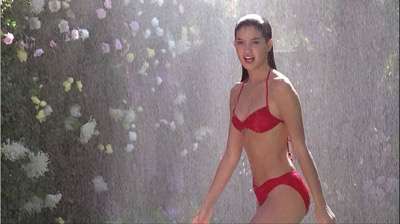 Upon walking inside (or being buzzed in, actually), we were thrilled to see Phoebe standing behind the counter. We all immediately caught a whiff of unfriendliness, though, and, as another saleswoman greeted us, Phoebe moved to a different part of the store. While we perused the shop, we noticed that she oddly kept putting her hair in front of her face, as well. 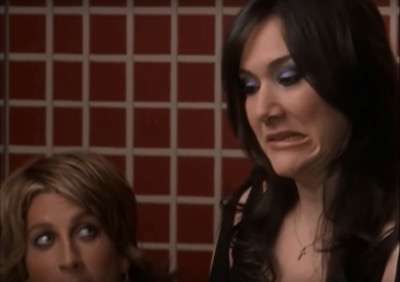 Now I am a major shopaholic, but Lavonna puts me to shame, so, it did not come as a surprise that she managed to drop quite a bit of coin at Blue Tree. I should also mention here that, thanks to her Kentucky upbringing, Von boasts a very heavy and endearing southern accent, which typically causes people to immediately respond favorably towards her. She is also extremely boisterous and friendly, as am I, and we are generally quick to make friends and talk easily with most people. Well, as she was being rung up for her purchases, Lavonna asked the saleswoman if Phoebe would pose for a photo with us. There was no one else in the store at the time, aside from a friend of Phoebe’s, so it seemed like a good, low-key opportunity for a quick pic. The saleswoman got a scared look on her face, though, and said, “You can ask her, but I’m not sure.” Not a good sign. But I took it in stride because being that Lavonna had just spent quite a bit of money in the store, I couldn’t imagine Phoebe turning us down. So I approached her and asked if she wouldn’t mind posing for a picture, to which she said, “Oh, I don’t do that. I decided when I opened the store to keep my show business life separate from my business because if I had to take photos with every fan who asked it would be like . . .” and she then proceeded to make pretty much the same face that the “Face Girl” did on Sex and the City (pictured above).

Now depending on the circumstance, I can sometimes understand a celebrity not wanting to take a photograph. In this case, though, not so much. If that is her attitude, then she shouldn’t be marketing Blue Tree as a celebrity store – which she very much does. Heck, she even filmed (and starred in) a lengthy tongue-in-cheek commercial for the shop that featured her actor-husband Kevin Kline. You can’t have it both ways, Cates.

So that was that. We left the store sans photo and headed to a Starbucks up the street to grab some coffee, laughing and joking about Phoebe the entire way – my husband saying, “I hope she trips and breaks her hipster glasses” and Lavonna composing imaginary snarky tweets to send to her, all of which were well over 140 characters and contained the hashtag “overpriced.”

Ironically, our celebrity luck took a dramatic turn in the minutes that followed. As we were waiting for our drinks at Starbucks, my husband happened to notice Edward Norton standing in line. He pointed Ed out to us (after our meeting, I feel like I can now call him Ed 🙂 ) and just as he was giving his order to the cashier, Lavonna started loudly saying in her deep twang, “Excuse me, excuse me!” from across the room. Ed looked over and said, “Yes?” Lavonna then put her hand in front of her mouth, leaned towards him, and in a loud theatre whisper said, “Are you Ed?” He walked towards us, leaned forward, put his hand over his own mouth and in a loud theatre whisper replied, “Yes!” It was hilarious. Lavonna then asked if he would pose for photos with us and he happily obliged, even taking off his sunglasses to do so. 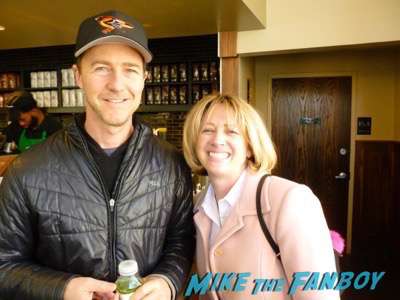 After the pics were taken, we thanked Ed, returned to where we had been sitting and I proceed to look at my camera to make sure the photos had turned out OK (hey, this isn’t my first rodeo). I quickly noticed that Lavonna’s eyes were closed in her picture and when I mentioned it to her, she loudly said in her southern accent, “Are you kidding me?” 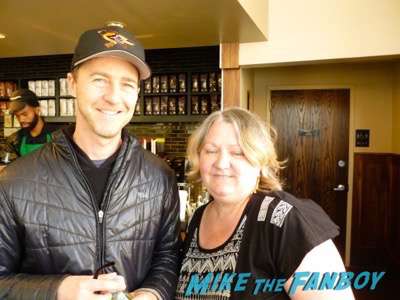 Well, Ed overheard this and approached us again and said, “Did your photo not come out?” I explained that Lavonna’s eyes had been closed in her picture and he said, “Well, then let’s take another one,” at which point he again took his sunglasses off. I should mention, too, that Starbucks was fairly crowded at the time (as you can see in the background above), so I honestly wouldn’t have blamed the guy had he turned down our picture request in the hope of not drawing attention to himself. But that was not the case. Edward was friendly, funny, and completely engaging. He even chatted with my husband a bit about living in New York and said good-bye to us on his way out the door once his coffee was ready. It was everything one hopes a celebrity encounter would be and we all walked away loving Edward Norton more than we already had – and thinking to ourselves, “Phoebe, schmoebe.” 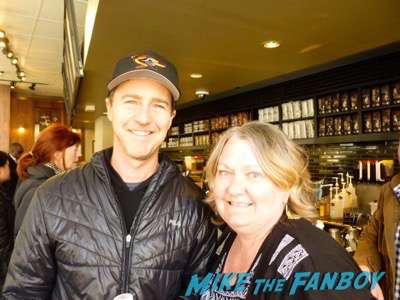 Now, prior to this meeting, I had no idea if Edward was fan-friendly or not. I had never met him, nor had I ever heard of anyone else meeting him. I did know of his reputation for being difficult on set, in a serious method actor sort of way (a reputation he famously mocked to fabulous effect in Birdman), but was completely unaware of his attitude towards fans.

Flash forward to the following week when I posted the photos on Facebook upon returning home. I was shocked to receive a comment from Mikey stating that Edward was “one of the hardest celebs ever.” More similar comments from other friends and readers quickly followed, all saying that the actor is typically not nice to fans. I was flabbergasted! My experience with him was honestly one of my best celebrity experiences ever – a moment I will always cherish. I am so incredibly thankful we were unaware of his reputation prior to meeting him.

Why was our encounter so different from that of so many of my friends? Did we catch Ed on a good day? Has he changed his tune in recent months? Was he softened by Lavonna’s accent? We’ll never know, but regardless, there’s a lesson to be had. Don’t ever be afraid to approach a celebrity, because the truth is, you just never know. I have often avoided asking a star for a photo based upon a rumored unfriendly reputation. Thanks to this experience, I won’t be making that mistake again.