Big Mike has a great recap of his week of 1980’s horror. And he’s done a great recap so I’m just really going to shut up and let me tell you all about it!

Hey kids, long time no write. It’s your buddy, Big Mike, here. I’ve been keeping a low profile for a while but I’ve been getting back out there and having a ball. It’s been much needed. I hope you all had a great summer 2015. It sucks that it seems to end earlier and earlier each year. Pretty soon kids will be getting out of school in April and heading back in around the end of June. As long as they stay the hell out of my way I guess I’ll be fine. Anyhoo, this one is going to go out to my fellow horror fans.

This summer I was delighted to spend a good number of evenings at the Egyptian Theatre in Hollywood watching the “Night of the Living ‘80s” features. A special shout-out to Grant Moninger for programming these awesome nights with some great guests. These were a series of nights giving horror fans of the 80s a double feature of horror flicks with guests from certain features reminiscing with the fans in between films. I purchased the sweet book Fangoria: Cover to Cover this past March at a signing at Creature Features in Burbank and decided to keep getting signatures in it because it covers so many movies and performers. I’ve been getting anyone related to horror that I can, from make-up/effects guys, writers, composers, directors to victims and a couple “slashers” themselves. I figured this was a great opportunity to add to the growing number of signatures I already had going. 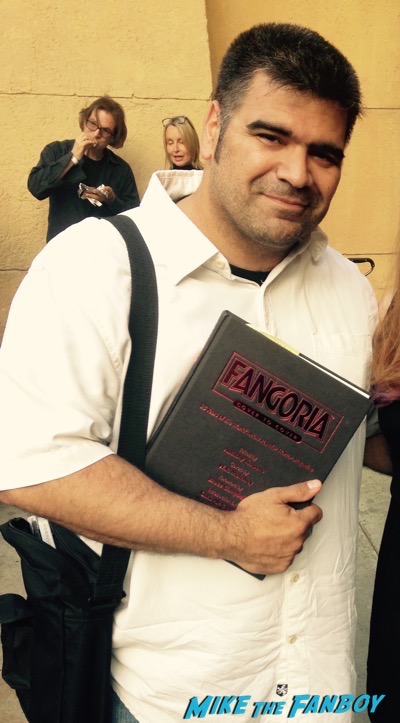 The first set of movies were a couple from director Stuart Gordon. I had already gotten him to sign my book at a signing at Dark Delicacies along with his wife so there was no pressure for me on this evening. The next night would feature a couple of ghost movies called The Changeling and Poltergeist. Peter Medak, who directed George C. Scott in The Changeling spoke between films. This movie is said to be the basic blueprint for most ghost movies. Person or persons move into a house, find out it’s haunted, research as to what happened to make it haunted, must find a way to resolve ghost’s issue instead of moving out. Why anyone would want to haunt George C. Scott is beyond me. That guy was General freakin’ Patton for freak’s sake! (In a movie called Patton.) I kept waiting for him to tell the ghost to stay the hell off his lawn. Anyhoo, I got to hear some nice stories about Mr. Scott and the making of the movie and had no trouble getting my book signed. Since there wasn’t a page with anything Changeling related I asked Mr. Medak to sign on the page with the Species II cover since he directed that as well. I like when there isn’t a mad dash to the front and everything is calm. That’s the way it should always be. I then got to see Poltergeist on the big screen and never realized how sexy JoBeth Williams was in that because I was rather young the last time I had seen it. (On VHS. Shhhh. That’s DVD on tape. I’m old.) So bonus for me. I said “bonus” right? Yeah, I see it. Whew.

The following night was a special treat. Return of the Living Dead was playing with cast and crew in attendance followed by Night of the Creeps. Now they had a reunion the previous year at the New Beverly Theatre and I remember being there to try and get Miguel Nunez on my Crystal Lake Memories blu-ray since he was one of the victims in Friday the 13th part 5. (I’m also trying to get that and the book version signed by Friday the 13th people.) He was no-show and I must’ve left once everyone had gone inside. This time I was going inside to watch the movie and hope I’d get as many of the cast as possible after the Q & A, since after 30 years it was going to be hard to recognize a lot of them. I didn’t pay any attention to last year’s attendees because I didn’t have my Fangoria book then. This year I at least had the luxury of watching the autograph dealers outside hit up anyone from the cast. They’re almost always up on that shit. They helped me spot Beverly Randolph, Brian Peck and Jewel Shepard. Jewel was begging folks not to sell her autograph and told me and a couple of other folks that she would sign for us inside. She was in a bit of an “enhanced zone”. That would be further displayed during the Q & A later on. Jewel said she guilted Miguel Nunez into coming but he never made it. Luckily, Thom Matthews showed up. For Friday fans he’s the dude that played Tommy in Part 6; the character who killed Jason in Part 4 stopping a brutal bloody murder streak but had to make sure he was dead by digging up Jason’s grave and accidentally bringing him back to life causing him to go on an even deadlier, bloodier brutal murder streak. I had just missed him when I arrived and heard he was limiting his signing to just one or two, but when he made his way back from wherever he went he was happy to sign my two books and blu-ray slip. That guy couldn’t have been nicer. He signed on the page in the Fangoria book that featured him on the cover reporting on Return of the Living Dead, which is the page I got everyone else on as well, so that worked out nicely. Clu Gulager was even there. He was the father from Nightmare on Elm Street 2 and played the owner of the medical supplies company in Return of the Living Dead. He was more than happy to sign my book and even brought out a large “prop” during the Q & A. Since this is a family column I won’t mention it was a large schmeckel about five feet tall. He mentioned when he started acting in Hollywood decades ago that he never forgot a piece of advice he was given, “Walk tall and carry a big stick.” Only, he misheard “stick” for something you poke up through the bottom of a bucket of popcorn on a first date. It was quite a treat watching and listening to him converse with his prop and he even gave it a nice voice. You really had to be there. The cast seemed pretty tight and happy to be there for their fans. I was lucky enough to get Ms. Shepard afterwards before she took off while the others stayed around as long as possible signing and posing for pics with the rest of the lucky fans. The only one I didn’t get was John Philbin who had to leave before the panel was over. It was a great evening. 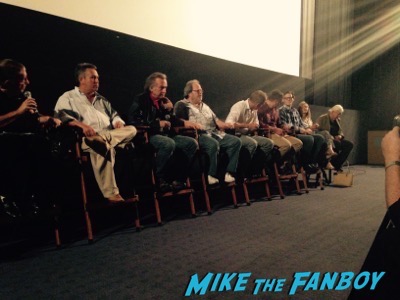 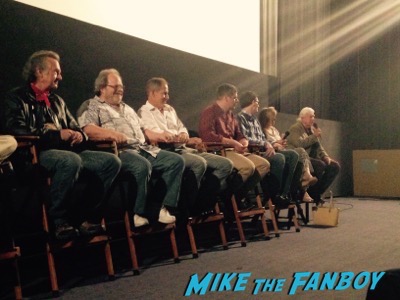 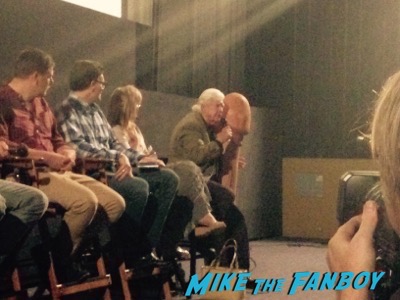 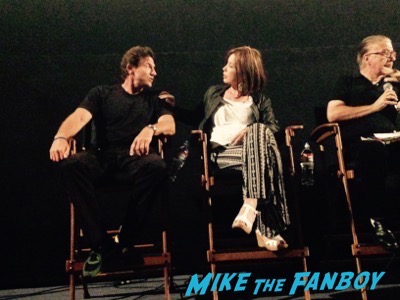 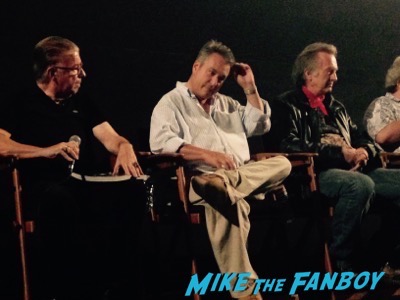 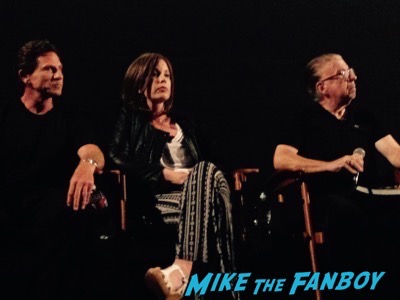 The next double feature would be a four days later on a Wednesday night. Maniac Cop 1 & 2 were playing with director William Lustig in attendance for a Q & A. Now, I already had him in my book from the day of the signing when I purchased the book, but that was on the inside cover, which is fine, but I like getting the pages of the covers signed when possible. There was a page with an inset of the late great Robert Z’Dar as the Maniac Cop which Mr. Lustig was more than happy to sign. The following night the writer of Maniac Cop trilogy, Larry Cohen, was in attendance for a Q & A for two of his movies, Special Effects & The Ambulance. I had actually never heard of the latter two, but The Ambulance featured Eric Roberts, Stan Lee, Red Buttons and James Earl Jones. Larry pointed out that he actually gave Stan Lee more than just a cameo appearance and even a few lines. I pointed out to him that he got Red Buttons and the guy who voiced Darth Vader to say the “f” word in a movie. It was quite something. I miss 80s movies. Movies were a lot simpler then. I also miss my 80s metabolism, but that’s a whole different tear-filled column.

There were a few more horror nights at the Egyptian that featured films and appearances by Tom Holland of Fright Night & Child’s Play fame and Joe Dante with The Howling. My favorite night would be the closing evening with a movie I had never seen and the cast would be in appearance. 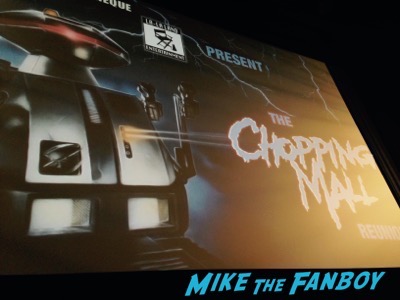 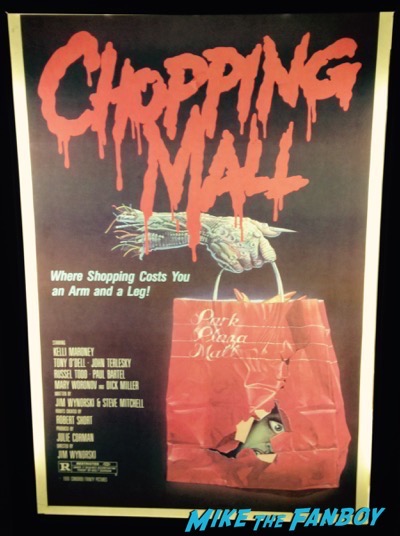 Chopping Mall is a classic 80s horror flick where three high-tech security robots armed with lasers run amok at a LA shopping mall after closing, leaving a group of horny teenagers in peril. This was one I missed last year at Cinefamily and was not going to make that same mistake twice. The topper would be Night of the Comet would be the second feature. Both movies starred Kelli Maroney and I was happy I would finally have the opportunity to meet her, cause she was a cutie pie back in the day. I only wish I was as smart as Mike the Fanboy, also in attendance, who was smart enough to have mini posters to get signed. I love those things. If his nickname wasn’t already “Fanboy” I’d call him “Mini Poster Mike”. He also had his Comet poster already armed with Catherine Mary Stewart’s autograph from when we got her at the same theater when the cast and crew of The Last Starfighter was there for their panel. (The Egyptian Theatre rules.) I was lucky enough to get three folks on the way in, including a dude named Russell Todd who was one of Jason’s victims in Friday the 13th Part 2. Luckily I had my Crystal Lake Memories book and Blu-ray handy in case I ran into any Friday alumni. In Friday 2 he played the dude who spies on a hottie who thought it would be a good idea to go skinny-dipping in a lake at night. His is the role I would’ve auditioned for. He steals her clothes but steps into a snare trap and that would pretty much be his demise. Anyhoo, he was more than happy to sign anything and everything the fans brought. In fact, everyone was awesome to the fans. We even got buttons that said “Have a Nice Day- Secure-Tronics”. (That’s the company that made the non-surge protected killer robots!) 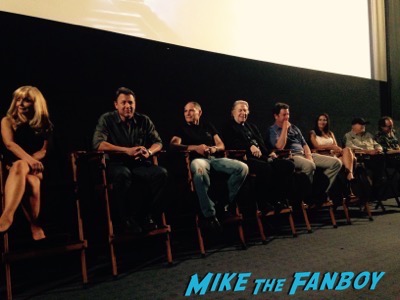 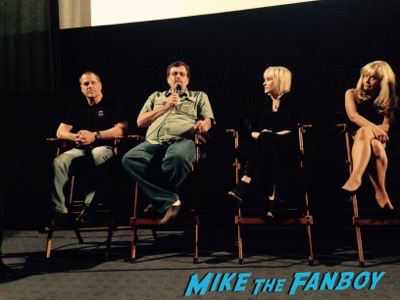 The movie was a blast and everyone was again happy to be there watching and reminiscing with the fans and that makes a big difference in the whole experience for everyone because nothing beats an all-around genuine interaction. Once the panel ended it was a very calm approach and Fanboy and myself got everyone we needed on our posters and books and grabbed a few pics in the lobby with some of the remaining cast. It was a great way to end the fest and I couldn’t have been happier. I’m looking forward to the next event at the Egyptian and you should too as long as you don’t plan on getting in my way. Stay cool, America. 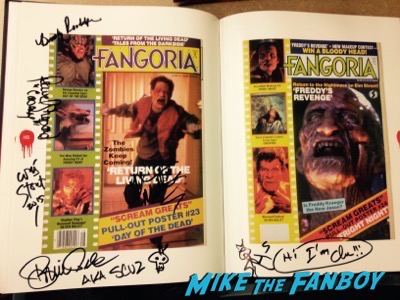 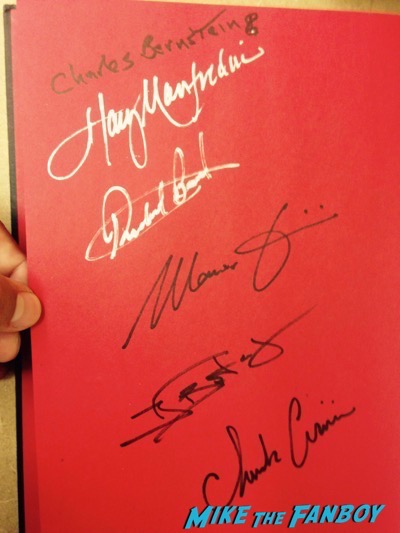 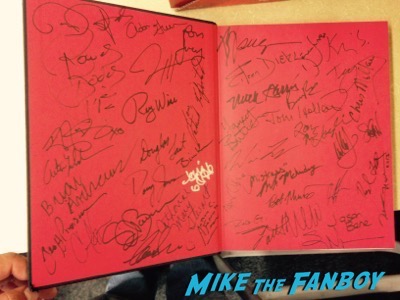 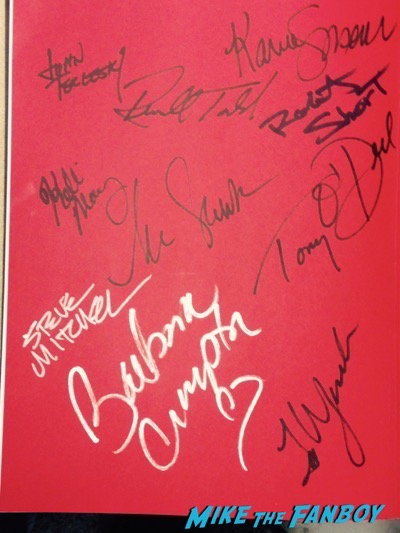