Elisa in the Big Apple, has been a big fan for ages and really wanted a photo with Gerard! Not only does Gerard Butler have Playing For Keeps coming out but he also has Chasing Mavericks coming out October 26th!

Check out Elisa’s meeting with Gerard Butler after the jump!

My goal last week was one thing: Meet Gerard Butler.

Since I first saw him in “Dear Frankie,” I’ve been a huge fan.  He’s another one I’d go see any movie he’s in; I saw The Ugly Truth 5 times in theaters.

I’d missed him in the past when he was doing promo work, for various reasons – school, work, etc.  Although I did managed to see him up close at the premiere of The Bounty Hunter:

This time I would NOT miss out. He was going to be in town promoting his new surfing film, Chasing Mavericks, a film I can’t wait to see!  I happened to have Monday and Tuesday off and although I failed the first two chances (on Monday), I knew my best chance would be Tuesday, and boy was I right!

I headed out to The Daily Show, there was a decent number of people but I had hope; this would happen today.

After about an hour, he arrived, He immediately started signing for the pros. I was wedged in there but quietly and politely asked if he would sign my autograph book. He said sure and gave me a small smile. 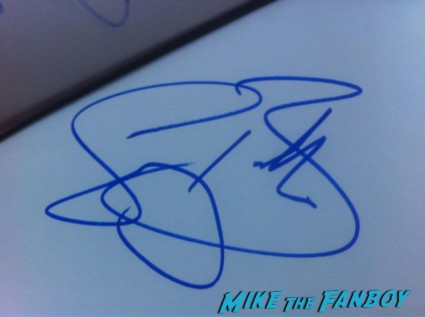 I really just wanted a picture with him but he seemed to be in a hurry and I did get really nervous. He was really nice with everyone and greeted his fans so warmly! What a guy!

After he went in, I decided to stick around, in hopes I could get a picture with him. I realized then that I still don’t have a camera with a working flash (frustrating). So, I hoped that my Panasonic would take a decent night shot. An hour later, he came back out and again was so nice to everyone, signing (yet again) for the pros. I quietly ask if I could have a picture and he smiled again and I got my picture! He rubbed my back and when I said “Thank you,” he replied “Thank you, sweetie.” I died. Seriously, could he be any nicer? Perfect. 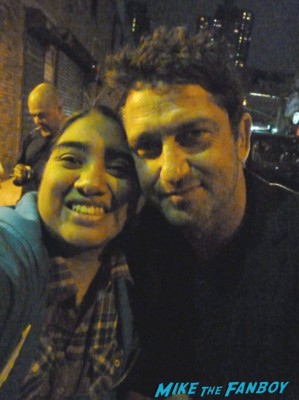