Home / Fanboying! / Elvira Mistress Of The Dark Pays A Visit To Golden Apple Comics For a Fan Meet And Greet! Can We Say Awesome! Autographs! Photos! And Hotness!

I have to tell you, there are pop icons and then … There… Are.. POP ICONS! When I say “Pop” I mean of course pop culture, one of the biggest POP ICONS ever is Elvira Mistress of the Dark. People all over the world know Elvira, they may not know who Darren Aronofsky is or who Channing Tatum is… But Elvira… They know…

Today was a really special day, the Mistress of the Dark was doing a rare free fan meet and greet at Golden Apple Comics on Melrose. I of course had to go but my friend Scott is a huge Elvira fan as well… And it was his birthday to boot! So we had a plan! Scotty was joining us and we were going to make it an Elvira birthday!

11:11 a.m. – We just arrived to the comic book store and there are about eight or nine people in line. The signing starts at 2:00 p.m. and honestly I didn’t know what to expect. 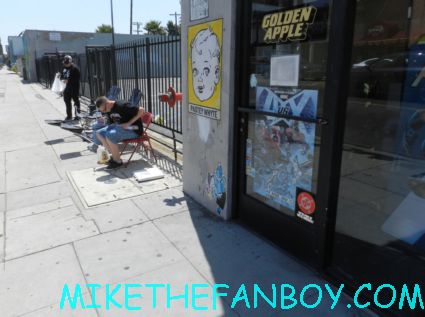 11:14 a.m. – Frank is here are well. You may remember Frank for writing in about his Katy Perry experience in Glendale a while back. He keeps saying he’s going to do more… but… lol… I’m just messing with him.

11:23 a.m. – Scott went to get cokes. Now, this is where it’s going to get confusing because Scott is the birthday boy and Scott-y is our resident music man. You see people complain “Oh there are too many Mikes” well today there are a couple of Scotts! LOL…

12:09 p.m. – I’m watching this dude, who is a sign spinner jump up and down and he is just spinning his life away. I swear the boy is so red I think he’s going to pass out in front of us. It like 85 degrees out and he’s redder than a baked watermelon. 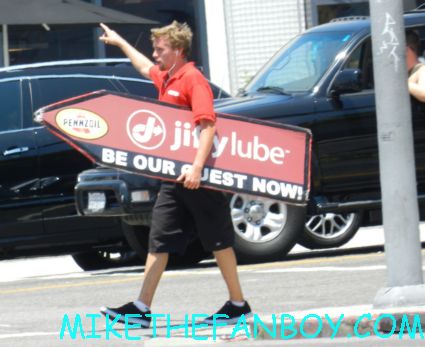 12:23 p.m. – Time for lunch. Salllllllssssssssaaaaaaaaaa and a chicken burrito! MMMMMMMMMM 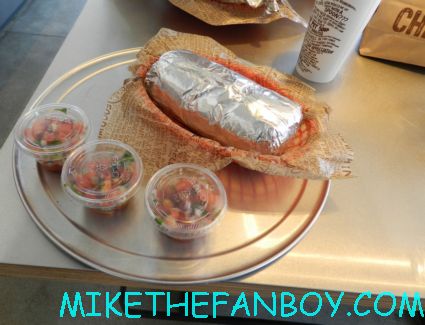 1:01 p.m. – The line has grown a lot. I would say there are at least fifty to a hundred people here! See you never know, will people show up early will they be late… We got here at a really good time.

1:25 p.m. – I’m getting really excited. Scott has a cobwebbed top hat he’s going to wear. As the birthday boy it’s his responsibility to look his best! 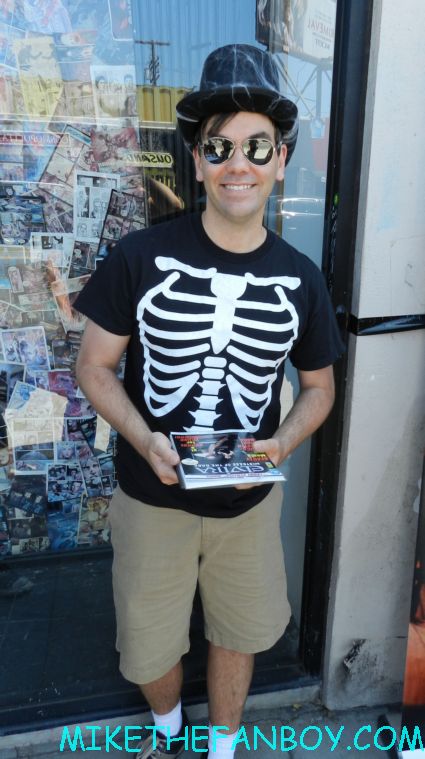 1:34 p.m. – Scott and Scotty are posing for a photo next to the Elvira banner. Good times… 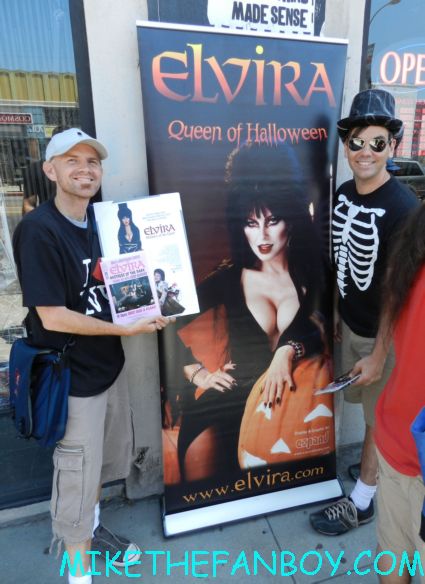 1:41 p.m. – Scott does not do events like this so I’m shocked when he says he wants to go to something. But this one he jumped at! Of course he’s counting down the minutes… Quite literally… Counting… Down… The… Minutes… 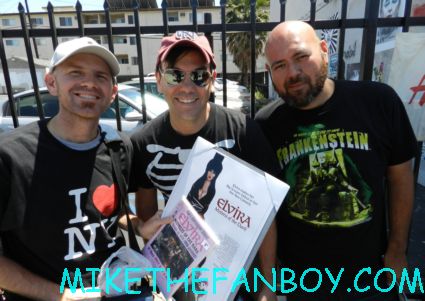 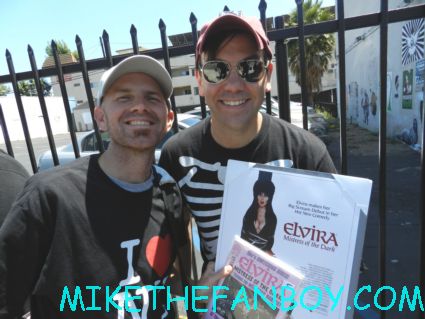 1:49 p.m. – I guess this event is being taped for Elvira’s new reality show. I’m not sure the name of it but I’m sure it will be promoted everywhere! 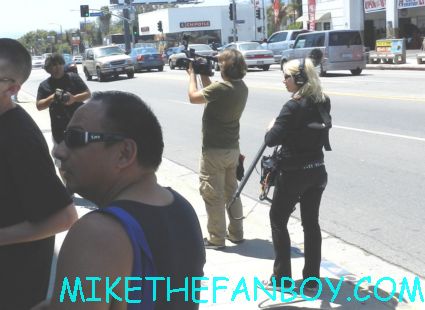 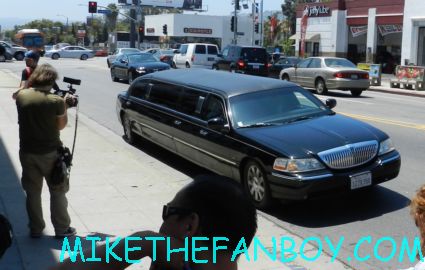 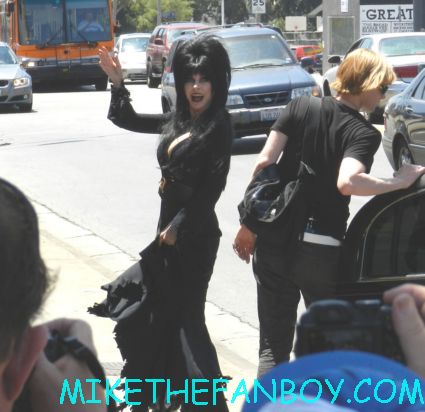 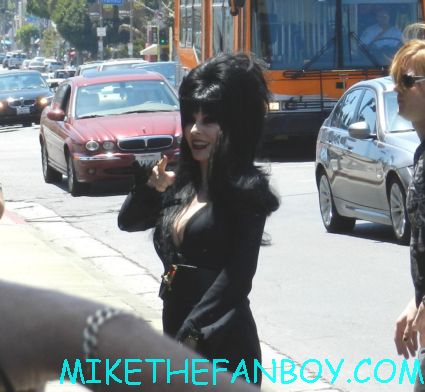 2:03 p.m. – They are taking everyone in by groups of ten. Elvira is being really chatty and talkative. I love that. So many times at signings like this it’s like assembly line signing but having a few seconds to chat really makes it all worthwhile. 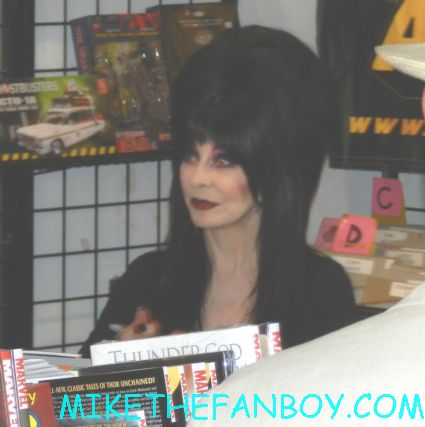 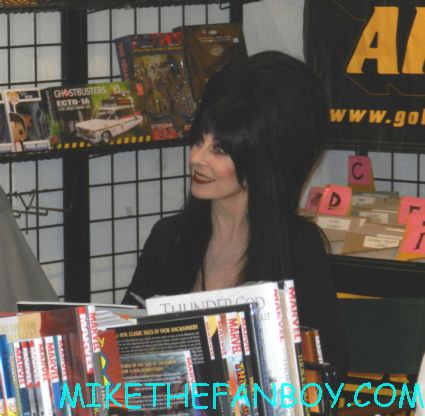 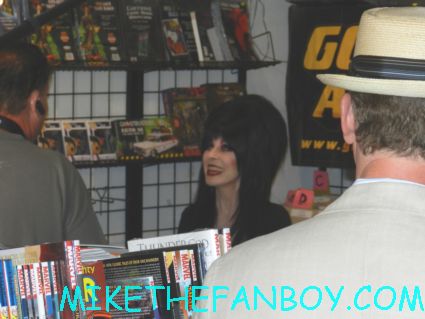 2:09 p.m. – Oh, they were getting everything ready before. I see. Okay they are starting with the fans now… Doh! 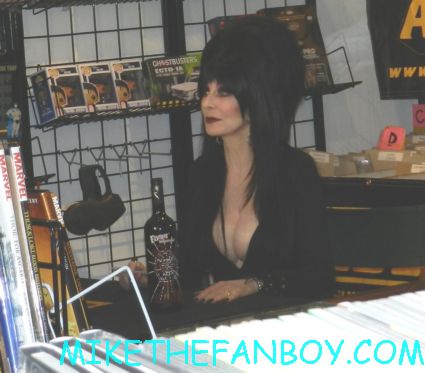 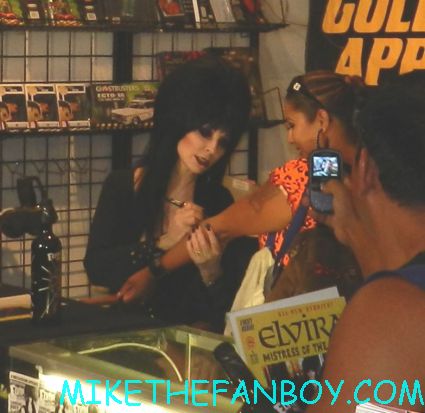 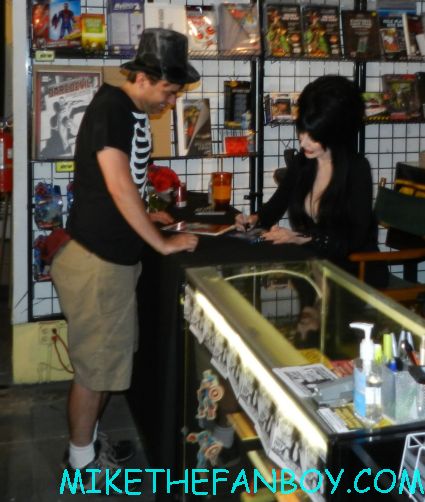 He was talking to Elvira about the DVD and comic and I tried to yell out it’s his birthday, but apparently no one heard me. 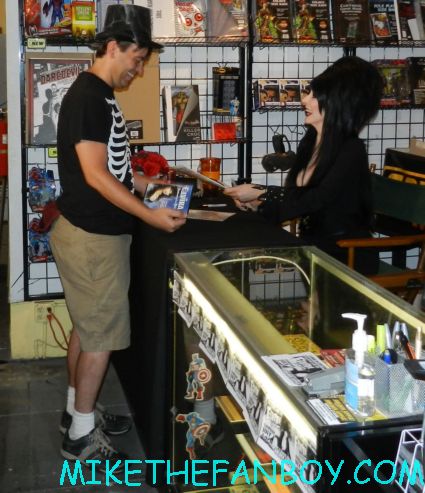 And my voice carries which is odd. She signed his DVD and Comic so nicely! I swear I admire great penmanship! 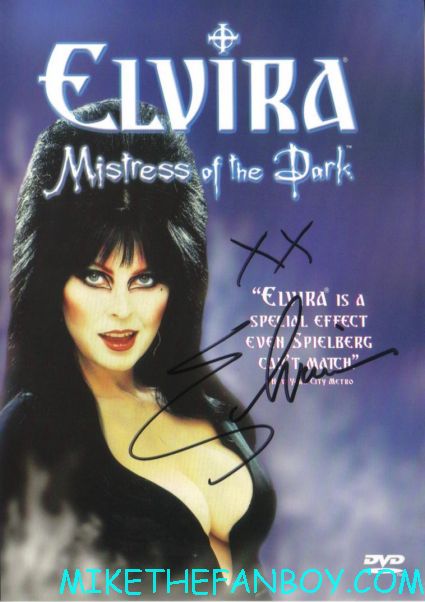 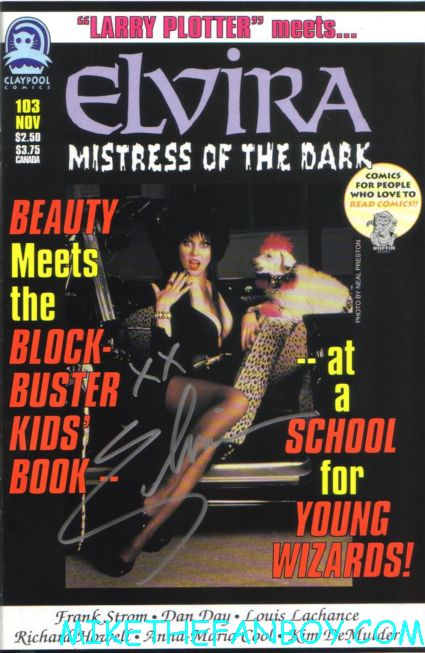 2:18 p.m. – It’s my turn! Elvira is so sweet. I swear she was just so nice. I talked to her about her time in the Groundlings and my friend who was with her at the same time. She signed my Comic and mini poster so nice. 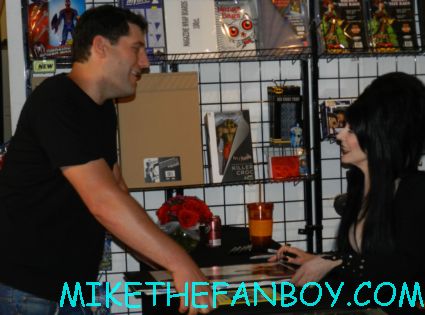 I could have literally had a five minute conversation with her and it’s was so funny because when I mentioned my friend Elvira said, “I haven’t seen her in a years, the last time I saw her was at her work. And ironically I was there and met her at that same time. 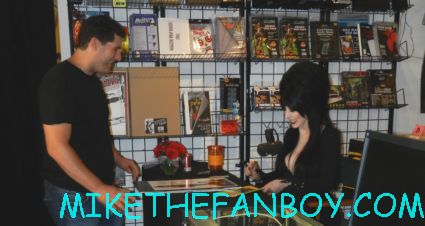 I had no idea it was “The Elvira” until after she left and then I was like, “Doh! Where was the camera!” 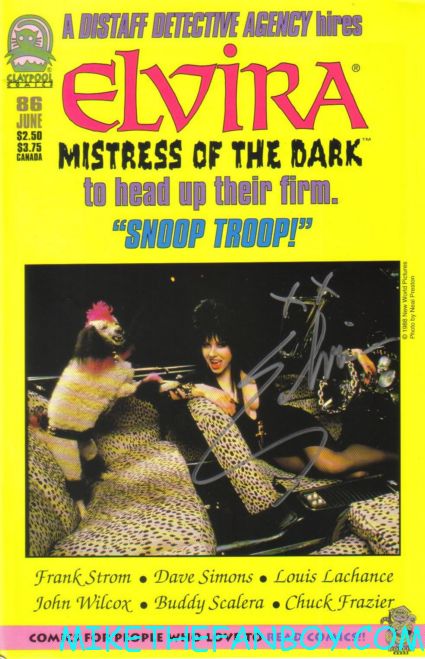 2:19 p.m. – Scotty was next and then I snapped a quick photo of him with Elvira as well. 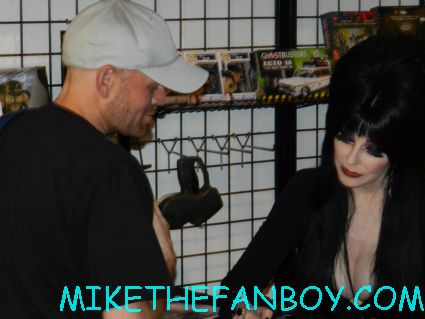 So frakkin awesome! So worth it to spend the Sunday afternoon waiting in the sun. 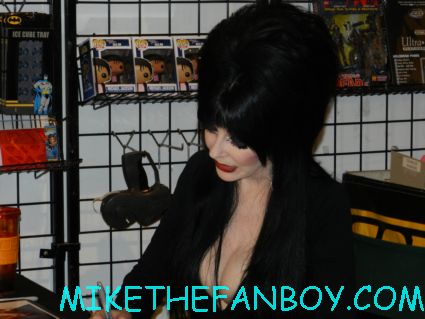 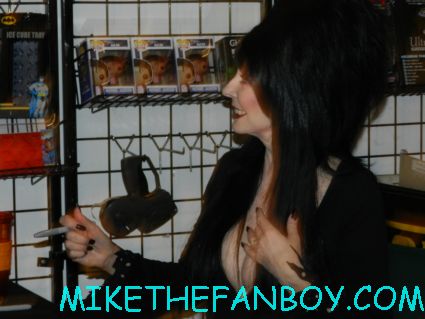 2:21 p.m. – OMG. I just noticed that the line has stretched around the corner! 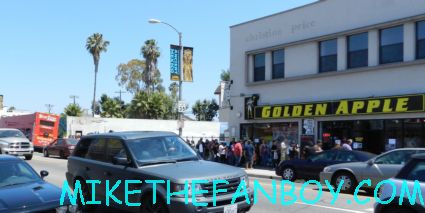 Literally there must be 200 people in line now! Hot Damn! That’s the power of Elvira Mistress of the Dark! 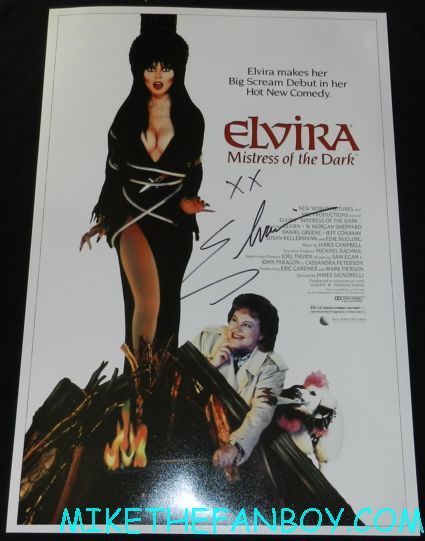 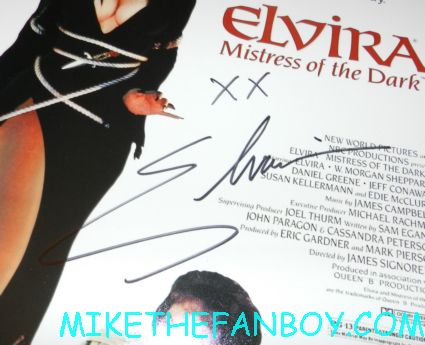