Home / Billy Beer's Barstool • Fanboying! • Q and A / Emmy Rossum! Billy Is Shameless When He Heads Out To A Q And A To Meet The Phantom Star!

Billy Beer poured himself some frosty beverages and sat down for a fun q and a with Shameless star Emmy Rossum. Now Emmy is starring in a new film called Comet Saturday Night and just like a lot of these smaller indie films, she headed out to promote the movie.

Billy has been a huge fan of Emmy’s for a while now. He was obsessed with Phantom of the Opera and even had a shirt with the Phantom’s mask that glowed in the dark. He would wear it out at midnights and scare the small children in the neighborhood… Oh wait… That wasn’t Billy.. It was… It was someone else, yeah. That’s it.

Anyway, check out Billy’s recap below!

Welcome back to Billy Beer’s Barstool. So I was planning on having a laid back weekend. I was going to stay at home and watch football when one of my favorite actresses Emmy Rossum decided to put on her instagram that she would be attending a Q & A for her film Comet Saturday night. So of course I still had 5 things I needed her to sign, so I Shamelessly (see what I did there!) headed up to LA for a screening of the movie Comet starring her and Justin Long.

The tickets were assigned seating, so when I bought my ticket I made sure I got in the front row. The movie was good. It reminded me a lot of 500 days of Summer. It wasn’t a big budget film. In fact, I think Emmy said she got paid $300 to do the film (granted I’m sure she’ll get some of the back end), but the dialog was quite clever.

When the film ended, they already had a couple of chairs set up. Emmy looked great as always, When the questions began, it was the same old same old. 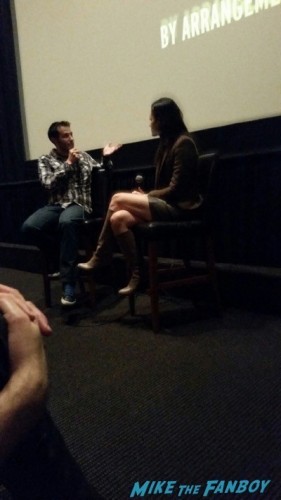 I was tempted to ask if the crew played the penis game (from the movie Waiting) with Justin, and I’m sure Emmy would have enjoyed the question, but I’m not sure how the kinda boring audience would have taken it. 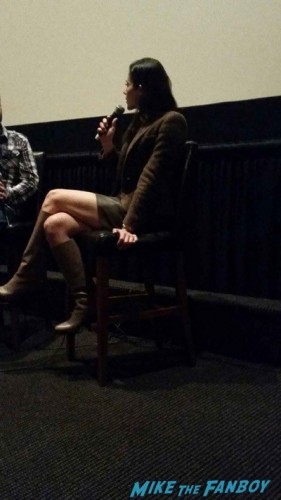 Finally the Q & A ends, and Emmy starts walking towards the stairs. At this point I’m in shock nobody has even approached her yet. Finally I head over there and ask if I could get a picture. She says sure, and then more people start to ask. Not many people have things for her to sign. I finally ask her to sign a 5 x 7 of her and I from Comic Con which she does. Then I ask if she could get the big one too (a 12×18 sexy photo). She quickly does that one too, then they take her away. 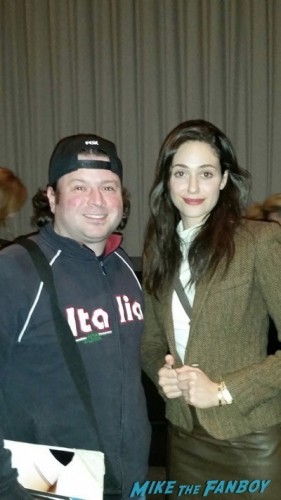 I decide to see if there would be a chance to get her outside. There were a few graphers waiting there. I guess she signed on the way in and told them she would do it on the way out too. When she exits, they pretty much say she’s not doing it. But then she’s nice enough to roll down her window and sign a few more. She tried to just sign for the people that hadn’t already gotten one. I wasn’t too aggressive, so I didn’t get one. I was pretty happy with what I got.

Time to go home. I got a lot of football to watch, AND Bud Light is the Beer of the Month at Buffalo Wild Wings! SCORE!!!! Till next time.