It’s Oscar weekend! Oh yeah! And in honor of the Golden Guy, Entertainment Weekly is putting none other than Oscar aficionado Billy Crystal on it’s cover this week.

Oh, it’s all about Hollywood right now isn’t it. It seems like every award show in the world leads up to the biggest one, the Academy Awards. Who will win? Personally I’m pulling for Viola Davis, Jessica Chastain, and Christopher Plummer!

The interview is apparently wide ranging but is geared towards the Oscars with Billy saying, “There’s a big responsibility to the job—I think more so this year because people were not happy last year,” he says. “I’ve got to deliver.”

Check out the full article on EW.com and also on stands now! 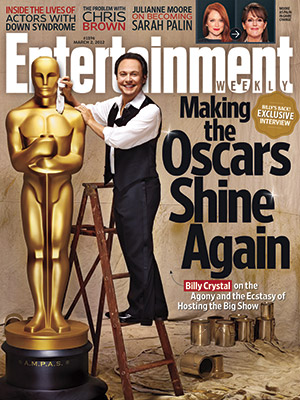