You may have caught my recap about meeting Mr. Eric Bana and now Suddenly Susan wanted to share her experience with the Hulk star. She had an awesome Munich mini poster to get signed and got a great picture with the star.

That Suddenly Susan… She always gets her man!
Check out her full recap below!

Eric Bana is a talented actor whose movies I always enjoy. I’ve been lucky enough to meet Eric twice before and he’s always been super nice. His recent appearance on a talk show was no exception. After arriving after Eric had already gone inside, I waited along with Mike the Fanboy himself for 2 quick hours.

Sure enough, Eric came straight down to his waiting fans. I really wanted a photo op, as the one I have is awful. But, I’ve also got this totally unique Munich poster that is begging to be signed so I’m hoping he’ll do both.

When Eric reached me I ask him to make it to Susan and he looks at the poster and says, “oh, that’s a special one”. Indeed Eric. 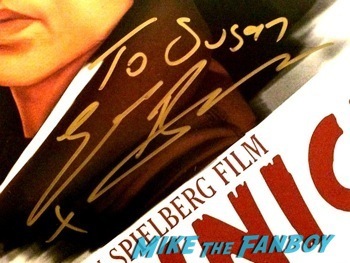 He autographed it exactly where I wanted without me even asking. As he signed I asked if it would be ok to get a photo op as well and he says “sure, where’s the camera”. Mike saved the day and snapped a wonderful photo for me.

I felt someone move my hand, which was around Eric (he had his arm around me as well). I dismissed it as a passer byer bumping me and put my hand back and it was knocked down again. Turns out it was the top notch security knocking my hand down. Apparently, Eric was in danger of nothing happening at all by my hand being there. 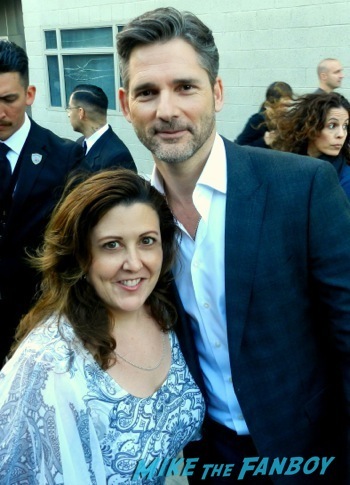 I’m so happy my photo- redux came out great and this awesome Vintage movie style Munich poster was signed perfectly. 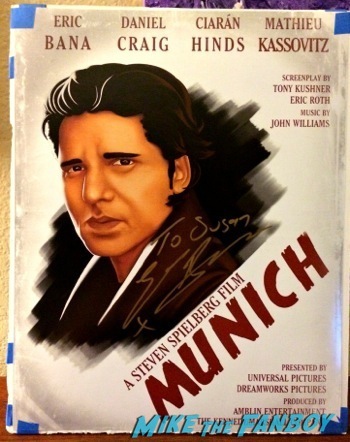