Home / Fanboying! • Scotty The Music Man • The Lovely Erica • True Blood / Erica and Scotty get Amazing Success with True Blood’s Alexander Skarsgard and Colin Firth! While Best In Show’s Catherine O’Hara is Nasty as Can Be! 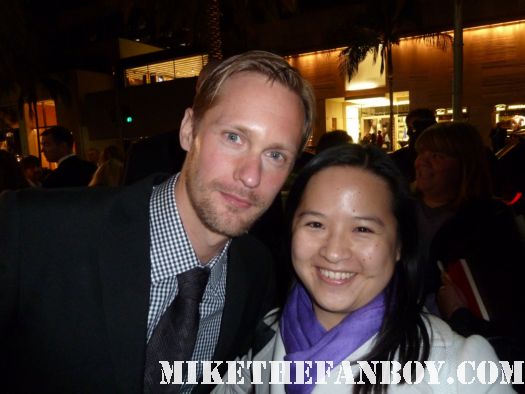 Personally, I don’t like writing bad stories about meeting celebrities. I mean usually if you are polite and nice they are quite cordial. However, there are those times… and I’m not just referring to Natalie Portman! This time it’s character actress Catherine O’Hara! Of all people! For 20 minutes she ignored me. She stood 2 feet from me and couldn’t sign a DVD cover. Seriously? Sigh.. At least Erica and Scotty got to meet some awesome people like True Blood’s Alexander Skarsgard and King’s Speech Oscar winner Colin Firth!

Sigh… Read the full report after the jump!

With the Oscars around the corner, the opening of the Tom Ford flagship store piqued my interest since I know Colin Firth should be in town for the Oscars and since he was in A Single Man (direct by Tom Ford). I’ve wanted to meet Colin Firth for some time so this looked like something fun!

Scotty and I head over to Beverly Hills to check it out.

We find our spot and sort of creep up to the grey velvet rope which goes with the grey carpet and white traffic cones. The barricades are slip covered with white walls. Yes, this is going to be the best dressed opening ever!

The staff is all getting into place and, I must say, this is the best looking valet, security and staff photographer staff ever! Well-dressed goes without saying, but this is just another level. They are still frantically setting things up since they are still literally putting his name up on the store. 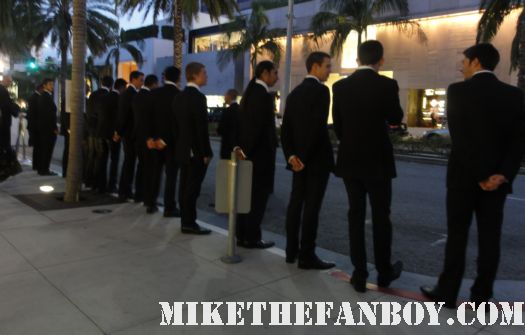 Of course we don’t match the decor so Tom’s people try to get us moved back, but the police say we have a right to be here. We get to stay. Yeah! Fortunately there aren’t a ton of professionals so we’re not too unruly a bunch and security will even compliment us on not being too crazy. 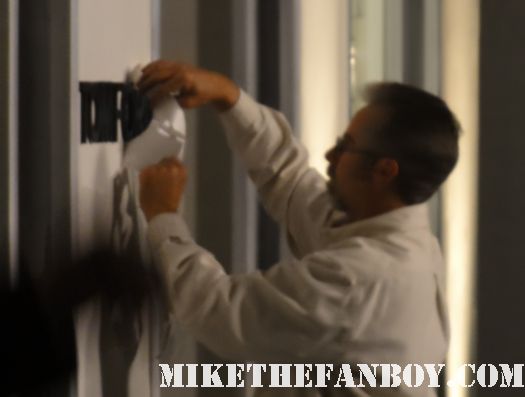 In fact, the staff has to spend more time barring people from getting to the party early. At least 4 cars are turned away and told it hasn’t started yet.

At around 7 pm, Tom Ford’s significant other arrives. 10 minutes later, Tom himself arrives. Scotty starts yelling for him, but Tom is really focused and does a few quick snaps for the photographers and then heads in. No such luck. 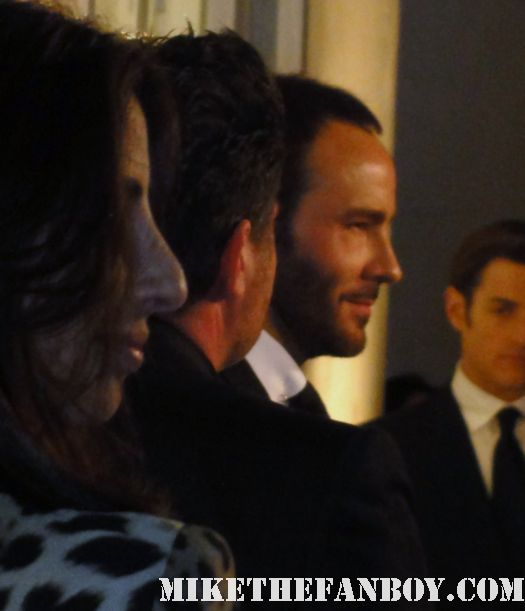 Milla Jovovich (Resident Evil, The Fifth Element) arrives first and half-heartedly waves that she’ll do it on the way out. 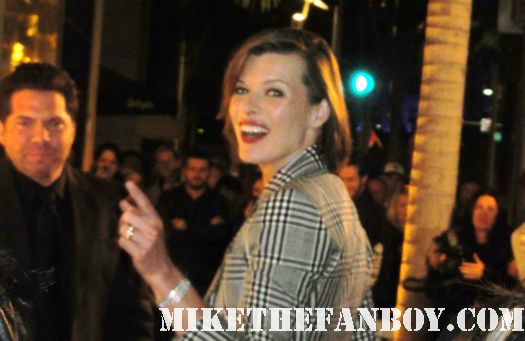 We really have no idea who is coming so we thankfully have a few sharp eyes in the crowd and pick out Jacqueline Bisset. She looks as lovely as ever and obliges us with a few signatures before being photographed by the press. 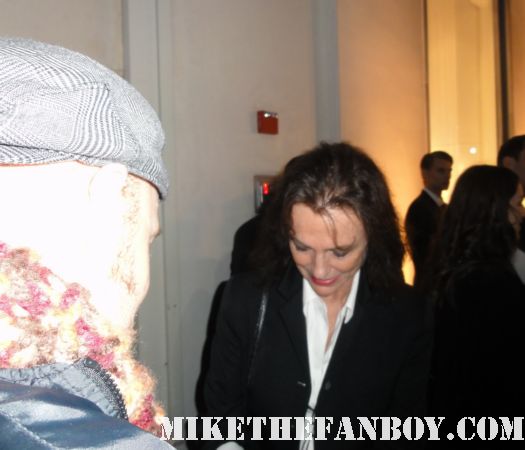 A large security guard stands right in front of me so I can’t see much. A limo pulls up and I heard Scotty gasp as Valentino gets out and heads to the carpet despite Scotty’s cries. 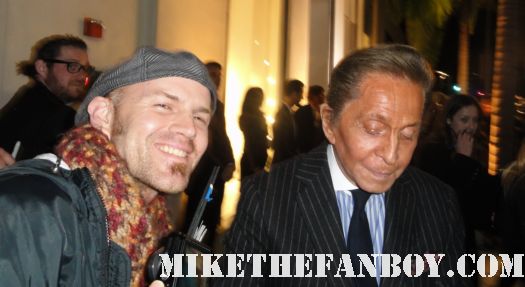 Kelly Lynch pops up and waves us off, but will later be quite friendly as she waits for valet. 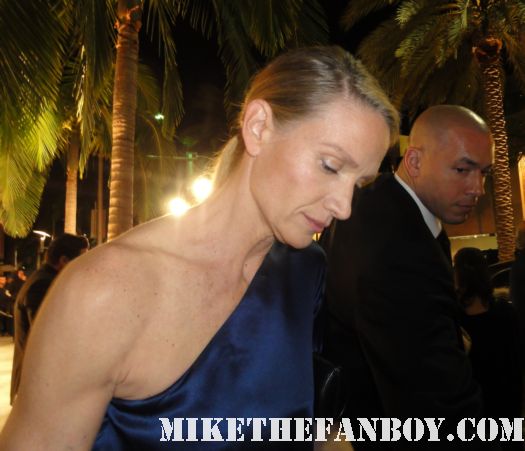 Milla Jovovich leaves and heads to her car, but gets guilted for promising to get us on the way out. She comes over and obligingly signs and take pictures. 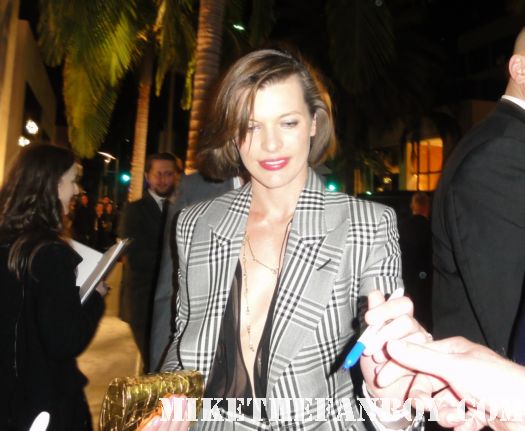 Anthony Kiedis from the Red Hot Chili Peppers pops by really fast and I don’t think the official press got any pictures since he was zooming. 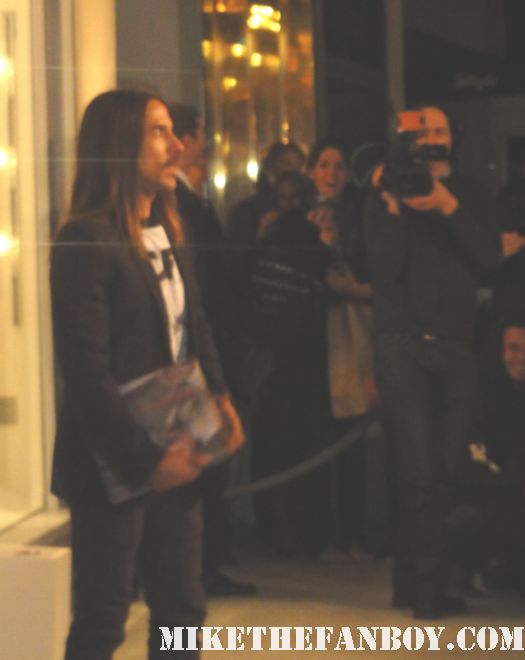 Suzanne Somers drops by, covered in a large hood. Various fans thank her for the thigh master in an attempt to coax her to come over. It doesn’t work. She signed one and that was it. 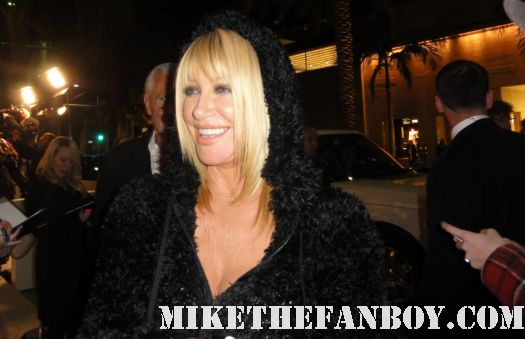 Desperate Housewives star Eva Longoria, looking adorable and gorgeous at the same time, arrives on the grey carpet. We call her over and she’s really nice and signs for us all. 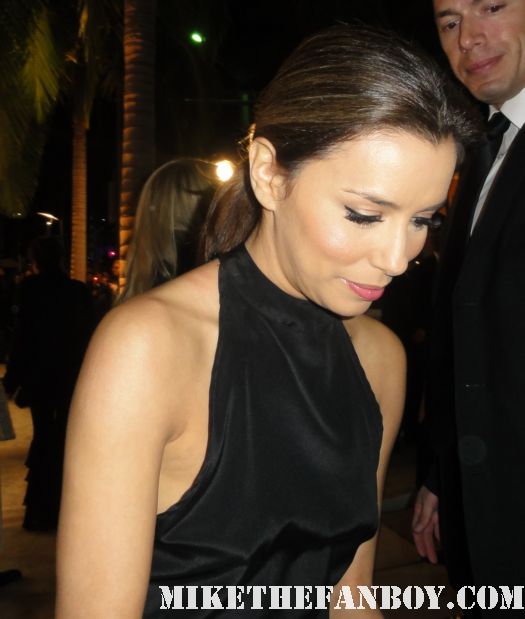 Valentino leaves about the same time a pregnant Rachel Zoë arrives. They chat for a bit and ignore the cries for Rachel and Scotty’s yells for Valentino. Rachel heads inside and Valentino remains, waiting for his car. Scotty continues to yell and we all join in. 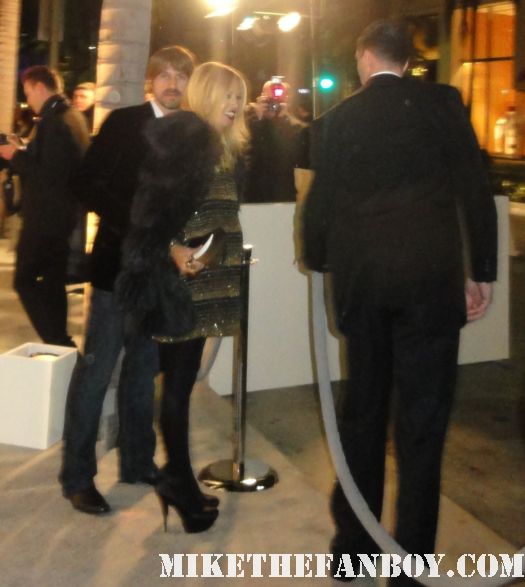 Valentino watches us, amused, and starts to make his way over. Scotty’s dying since he wants a picture with this legend and Valentino stops just 2 feet short of coming over. Somehow we try to explain that Scotty wants to be in the picture WITH him. Valentino continues to smile at us and signs an autograph. It’s pretty clear he won’t pose so I tell Scotty to lean over and get a few frames with the two of them together. Close enough I guess!

At this time there are lots of people coming in and a few headed out so it’s pretty chaotic. Someone shouts out and we see Catherine O’Hara she shouts “I’m late!” and she heads in. 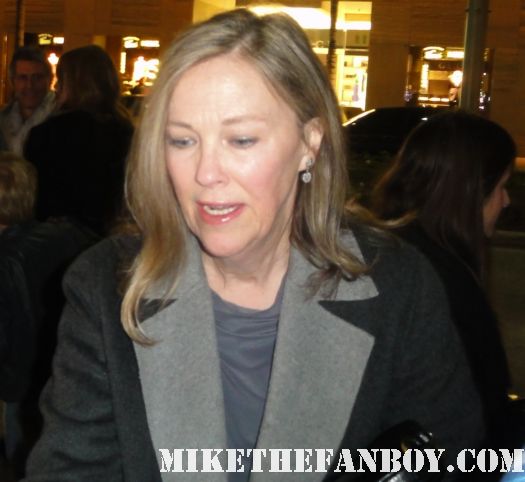 More bodies move in front of me and when they part, I see Alexander Skarsgard! Arg! I almost brought True Blood stuff with me this trip! Erik is my favorite character and I need Alexander on a bunch of things, but I’d gladly settle for a picture. He’s so tall that my neck is tilted back about as far as it can go as I look up at him to ask for a picture. He’s friendly and says “of course” and bends down in half to take the picture. As he gets back up, I beam at him with my neck tilted all the way back and thank him. He looks down at me, amused, and I think he’s debating about whether or not to pat me on the head or pinch me on the cheek as I am a tiny teacup human next to him…

Cheech Marin is making his exit about this time. Got to say, this is one of the more eclectic gatherings I’ve seen in a while!

Alexander leaves soon after and receives requests for more signatures and pictures. He heads towards his car, but stops when he recognizes the guy as an old friend and they begin to talk in Swedish. Small world I guess!

There’s a slight pause in the action so I call Mike to tell him that Catherine O’Hara and Alexander Skarsgard are here when someone calls out that Colin Firth is arriving.

I hang up on Mike in mid-sentence (sorry!) and frantically start to ferret through my stuff to find my German Shakespeare in Love lobby card (I’ve had this thing for 12 years!) and my Pride and Prejudice DVD. He’s one of my favorites and I’ve missed him twice so I’m about to go nuts. 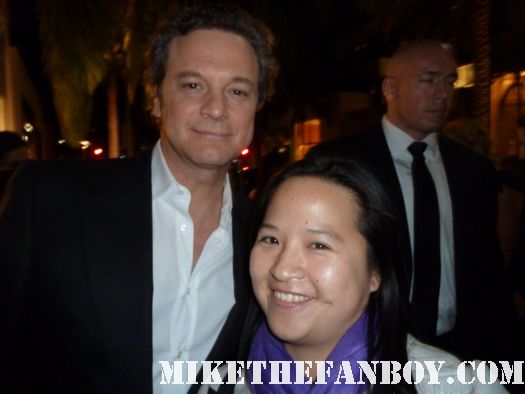 We start to yell (me rather frantically, I’m afraid) and Colin comes over. He’s polite and obliges us with a signature and takes pictures. His assistant is trying to limit us to one each, but he signs several for one of the collectors so I try to squeeze in both of mine. I drop my camera to squeeze it in, but I get it done! Yeah!!!

While I’m recovering, Bradley Cooper walks up. Bradley used to be the most fan-friendly guy, but post-Hangover, he hasn’t been as nice. So we’re all surprised when he signs a few things and then heads inside.

Another limo pulls up and I hear another gasp and some expletives from Scotty. I’m craning around trying to spot who it is and then see Kristin Davis looking fabulous. She smiles and gives a very Charlotte-like little wave and signals that she’ll come by after the event.

A bunch of other folks arrive and head in: Gina Gershon (Showgirls), Tom Hanks and Rita Wilson. They don’t even look at us as we call out for them. 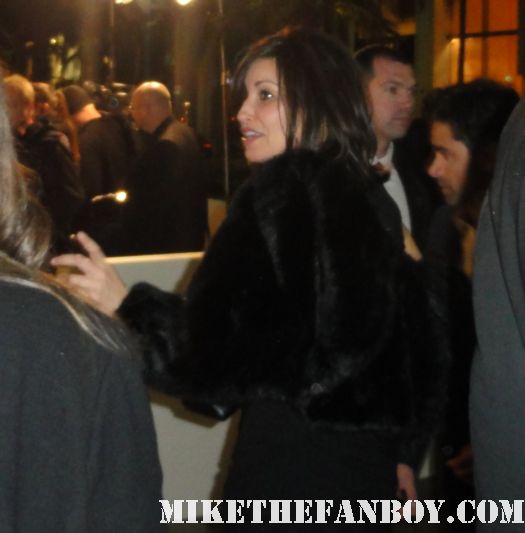 John Stamos arrives and comes over. I must say he’s always stops and is so nice and relaxed. 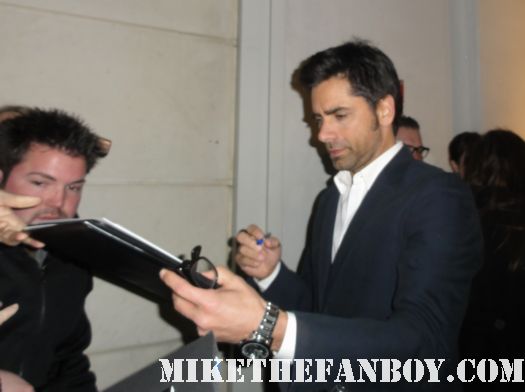 Tom Hooper (who will win the Oscar for direction for The King’s Speech in just a few days) comes on for about 15 minutes…enough to say “hi” to Harvey Weinstein who’s also around. 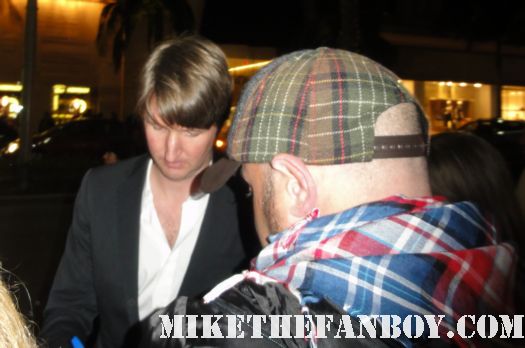 Wolfgang Puck is here as well. Does he own any clothes other than a chef’s jacket? 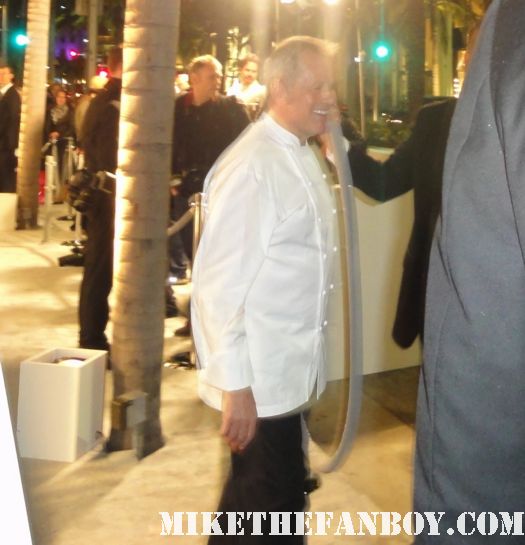 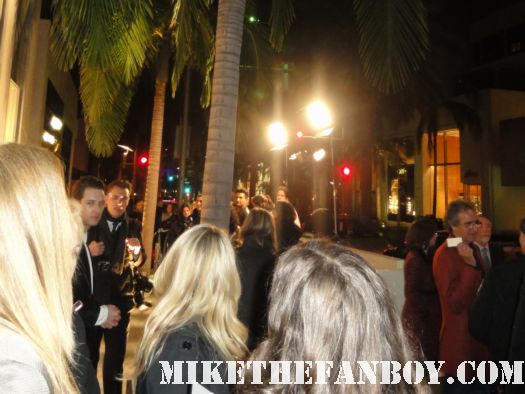 The drama continues with a rapt audience of about 50 people which includes Tom Ford’s staff, security, valet, the press and other guests who are all laughing at the stubbornness on both sides. Mike and the rest of us all continue to call (“Catherine, would you sign my Best in Show DVD?” “Catherine, it’s just one person who’s asking!”) and she’s still standing with her back to us. 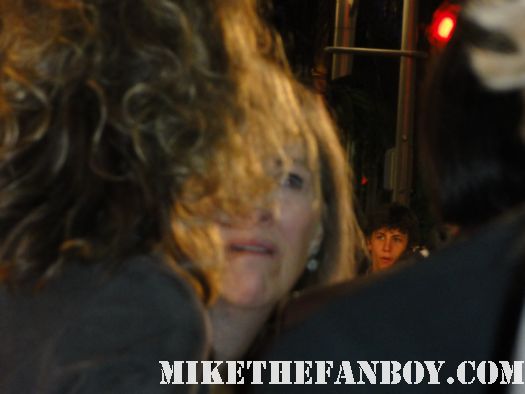 Pretty soon, Catherine walks off to distance herself, but her car still isn’t here. At this point, the press is making fun of her saying that she hurt her wrist and can’t use it to sign.

I’m telling Mike we should break into song with “Day-O!” but its no use. Finally her car arrives and she dashes off as fast as she can…poor Mike!

The carpet has thinned out now so there’s not a lot going on. The party is officially over, but people are slowly trickling out. Good party!

Then Amber Valletta, one of the last big supermodels, heads out. Scotty calls her over and she’s really great. He’s dying that he didn’t have any of the Versace photo spreads with him, but she signs a great autograph for him and also poses with him for a picture.

Gina Gershon leaves and doesn’t even look at us even though there are maybe 10 people left. As she gets into her limo, Scotty calls out into the quiet night: “Go Crystal Connors! Woo hoo!” Everyone laughs, including one of the event staff who says that’s the best thing she’s heard all night!

Tom & Rita dash to their car. Yes, they dashed. No walking involved here. Pretty much, that’s what Tom looks like any time I’ve seen him — he’s dashing to his car and not looking at the crowd.

We get word that Eva slipped out the back which means we are waiting on Kristin Davis. A car pulls up and we see Kristin Davis head straight to her car. No! Mike and Scotty approach her car hoping she’ll down her window, but she does not and her car heads off into the night. Sadness!

All in all, I am quite happy with Colin Firth and a picture with Alexander Skarsgard. Scotty was happy with Valentino and Amber Valletta on top of that. Poor Mike made his way over and got a rock.

It’s a crapshoot!
You never know!