So, here’s a question… Can you have a Fanboy Fail before you even go to the event?

Erica, who is our resident Harry Potter fanatic, has gone through the mill the past day or so! Erica is traveling to New York for the JK Rowling book signing and q and a… Now, it’s ticketed and clearly a BIG DEAL. So, after much speculation, deliberation and trial, she got tickets… And then… Disaster!

I’m not going to tell the disaster story as well as Erica so check out her full recap after the jump (with special assistance from her friend Elisa)!

Today we have a tale of woe and heartache for Mike the Fanboy readers. We won’t know if there’s a happy ending to this until October 16th, but I thought I should start my story now…

As any regular reader knows, I’m the resident Harry Potter nut and am really excited about the upcoming release for JK Rowling’s first adult novel, The Casual Vacancy. To launch the book JK Rowling was making an extremely rare public appearance – a Q&A followed by (wait for it!) a book signing! Yes, a book signing with JK Rowling!! October 16 at the fancy Jazz at Lincoln Center (JACL) theater in New York. Yeah!!!

However, my excitement has been severely dampened by the roller coaster of this week. Here now is the tale as told by my friend Elisa – with side notes from me to interject how crazy and frustrating this ordeal has been!

Elisa: What a ride this event has put us through. I knew that obtaining tickets would be difficult, but this has become even more complicated! Once I heard about this event, I was one of the many who knew immediately that I would try to acquire tickets.  It was even better because I live in New York and would be able to make the tickets in-person which would be both cheaper and give me the peace of mind that I’d have the tickets in hand. Erica voiced that she would like a ticket as well so I was prepared to attempt getting two tickets, with the help of friend Bettie who was willing to stand in line for me, if necessary as I work most days.

Elisa: The Sunday prior to the on-sale date, I had a drink at my local haunt and determined I would meander by the box office to check out how many people were lined up by then, fully prepared to join if necessary. I had heard people were camped out and was completely surprised that there was no one and I headed home.

Elisa: Unbeknownst to me — tickets had already gone on sale over 12 hours before the official time!! I didn’t find out until two hours later.

Erica: Once I saw a story in my twitter feed of how some tickets went on sale when someone found a link online, I immediately texted Elisa. We spent an hour scouring the internet to figure out what the hell happened and if there were any tickets left. It sounds like all the Potter fan groups found out, bought all the tickets they needed and then posted notices that the tickets were sold out. They had an hour to buy all the tickets they needed before anyone else. Google and you’ll find stories of how they bought several sets of tickets — sort of a “secret sale” for those in the know.

Erica: I tried the link and it was frozen with text that said there were only 8 seats left. Arg!!

Erica: We continued to fret over this until, at 3 in the morning, Elisa finally signed off so she could head out early and see if there were still tickets left for in-person purchases at the box office. Hopefully, more than 8 seats were left!!

Elisa: It seemed unlikely that Lincoln Center would do this on purpose so, as planned, Bettie headed to get in line on the day tickets were officially supposed to go on sale. She ended up being about thirty people back and when the box office opened. Tickets sold as normal, as if they hadn’t sold out the night before and with box office representatives assuring us that we would get tickets.

Erica: Waaaayyy over in LA, I was up at the crack of dawn, dialing and clicking on line to try to do my part to get tickets. I couldn’t get through on the phone and when I finally had a couple of tickets processing online, the system moved so slow it was about to time out. Thank God Elisa had successfully completed the in-person purchase!! 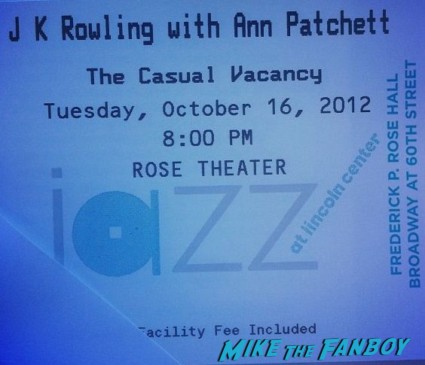 Elisa: I bought two tickets, as planned, with cash; I no longer use credit cards if I can help it and Erica and I were going to be in INCREDIBLE seats, in the front boxes, very close to the stage. 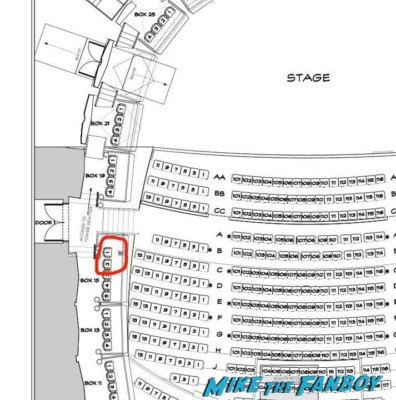 Erica: Yeah!!! It was a relief that we got tickets given all the drama the night before and all the difficulty trying to get through! We got tickets and terrific seats! The event sold out in about an hour and that should have been it, right? Ha!

Erica: Later that day, people started to talk and noticed that they had tickets for the same seat. What!?!?

Elisa: Rumors started flying that some seats were double-sold and the “secret sale tickets” wouldn’t be honored. I’d been in this situation before for a concert and gotten locked out so I felt for those who would be shut out. Life is full of disappointments.

Elisa: I continued to stay informed on the status of the “secret sale tickets” since I knew a few people who had gotten them then. I hoped that they would at least get to attend the event in some way, though I figured they’d do it like the Paley Center and others and have the Q&A on a closed circuit screen in another theatre or room.

Elisa: Then another day passed and it was announced that they’d be switching theatres – the event is going to be held at the David H Koch theatre which seats 2600 and unless JK Rowling is as super human as I like to think she is, I can’t imagine that she’ll actually personally sign everyone’s book as we heard was supposed to happen when it was still at Jazz at Lincoln Center (JALC).

Erica: Noooooo!!!! The new theatre is huge so you totally lose the intimacy of the setting. And how many books is she going to sign?!?!? 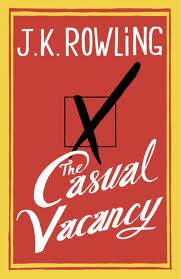 Elisa: Unfortunately, since I bought my tickets at the box office in cash, I had to hear this second hand. So I headed to both theatres (the old and the new) on Wednesday morning, hoping to get some answers. They both basically said: leave your information (name, email, phone number and seat numbers) and I would be contacted in the future. JACL couldn’t even confirm it would be moving to a new theatre. Obviously, miscommunication’s still at an all time high.

Elisa: On Thursday, I called the JALC box office, as instructed by new information and was told to leave my information again, though this time they didn’t even ask for my seat number, which just seems odd.  Now, I have to assume they’ll contact me through one of the methods. And still, I couldn’t get a straight answer as to what would be happening!!!

Elisa: I’m hearing through friends everyone will be asked to repurchase their tickets but of course, I’ll probably be the last to know since I can’t confirm that my info is in their system.   Elisa: Thanks to the incompetence of almost everyone involved, an event I’ve been looking forward to has now caused more heartache than necessary.  And now my only hope is that I’ll even be able to see Ms. Rowling in that behemoth of a theatre, one that I have heard firsthand has some horrible sight lines, the farther up you go.

Erica: And, if they actually use Elisa’s contact information and exchange the tickets correctly, where are we going to sit? We choose boxes specifically for their proximity to the stage. In the new theatre, the rough equivalent of our seats are a football field away from the stage. Sigh!!

Erica: So where are we now? Waiting…so JACL, Lincoln Center, Little, Brown and Company – please make sure you take care of ALL of the ticket holders – I think you guys owe it to us…especially as you now stand to make double the revenue.

So will there be a happy ending to this saga? Alas, we know not – yet. Stay tuned!