Everywhere I go, all I hear is, Downton Abbey this, and Downton Abbey that… Man, I like the show but people are passionate about it! Plus with all the spoilers being leaked, you can’t escape the appeal of the Abbey!

The Lovely Erica, who thus far had an amazing trip to the big apple with The Hobbit and Les Miserables premieres now set her sights on meeting the cast of Downton Abbey.

I just love hearing that a cast is nice to the fans. It warms my cold fanboy heart!

This trip was full of surprises and we found out, very last minute, about an appearance by members of the Downton Abbey cast who are in town to promote season 3.  It’s pouring rain and about 40 degrees so my sister, Big Apple Elisa and I are grateful that there’s an overhang we can huddle under to keep dry.

Eventually, I see a cab pull up with Hugh Bonneville in the front seat. No way! We scramble to pull our stuff out as he waits for his party to exit the cab.  I see he has family with him. Uh oh. Family!  We need to make this quick. (Drat!)

Hugh is extremely nice and signs a beautiful signature for  each of us. I tell him that his twitter feed is hilarious and he smiles. Hugh finishes up and we let him go without asking for pictures since we don’t want to be a pest. He mentions the others from the cast will be along soon.

We stand around with smiles when a person from Hugh’s party returns and hands us a gift from Hugh — linen napkins embroidered with the Downton Abbey logo that were given to the New Zealand press.  Holy cow!  Really?  A gift?!?!? 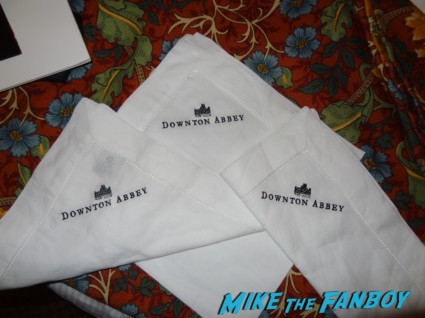 We’re stunned and then completely giddy which helps keep us warm in the cold rain.  That was incredibly nice of Hugh!  I guess we weren’t being a pest!

A bit later we see another cab pull up and I see Rob James-Collier (Thomas) in the front seat. Ah! He gets out of the car and is quickly followed by Joanne Froggett (Anna) and Sophie McShera (Daisy) and their handler.  The rest of the cast is here!

They all approach our shining, eager faces, a bit puzzled by our presence.  When I ask for a signature, they respond with a very friendly and enthusiastic “yes!”

They are all so friendly, it’s a little surreal. I chat with Joanne and Sophie who are concerned and amazed that we’ve been waiting for them in the cold rain.  We start to chat about their trip to NY so far.  Joanne is lovely while Sophie is adorable (and not at all skittish and bubble headed like Daisy).

Rob is very chatty and it’s fun to hear him in his native accent. Very opposite of the cold and calculating Thomas.  I ask if he could have guessed that this role would lead to all this hoopla. His reply was a very enthusiastic: “Fuck no! We’re here in New York! We went to see the Knicks and the White House!” 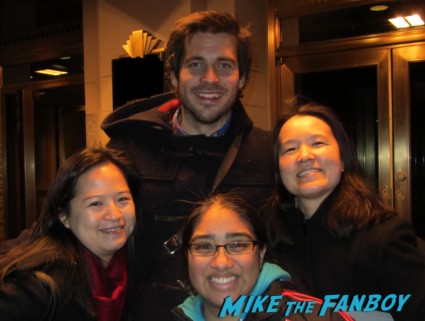 He sees Elisa’s Liverpool football jacket the two exchange words. Rob asks if we’ve seen Season 3 yet and when we tell him “no,” he seems disappointed that we can’t chat about it, but he promises it’s the best yet. Rob is so animated I think he’d be up for getting drinks, but they have a long day ahead of them and so do we!

They ask where we’re from and I tell them Chicago and that they totally made our trip. They “aw!” and say it’s such a pleasure. They were genuinely happy to chat with us fans which made this so much fun. 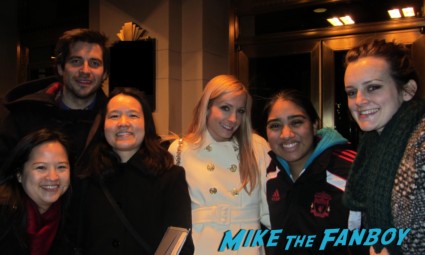 We say good bye and I let them go with a big cheer — friendliest cast ever. 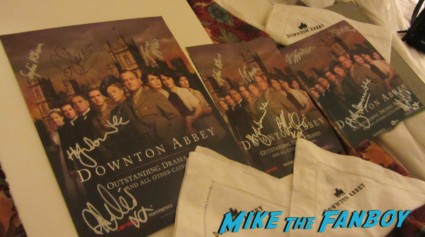