Erica loves her some Broadway, she also loves her some musicals! So, it’s only natural that she’s super excited about the upcoming Les Miserables. Hello! hugh Jackman! Anne Hathaway! Amanda Seyfried and… Russell Crowe!

When Erica was in the city that never sleeps, she heard that Russell Crowe was doing an Indoor Garden Party concert. Yep, Russell isn’t just an actor but a musician as well!

Check out her full report from the event below!

As a side note, this of course happened before hurricane Sandy hit. Everone here at MTF sends thoughts, prayers and love to everyone affected by this tragedy!

Les Miserables is the first show I ever saw in the theater and it’s turned me into a life-long theater fan ever since. I was nervous about the upcoming film since some adaptations have translated the musical to the stage well (Chicago – aside from Richard Gere, Hairspray, the Bette Midler Gypsy) and others, well, not so well (Producers, Rent). Thankfully, the film is casted with actors who can sing and the early featurette looks terrific.

While Russell Crowe is best known as an actor, he is a musician as well and he recently played one of his Indoor Garden Party concerts in New York. The night features the music Russell wrote with Alan Doyle and also includes guests like Scott Grimes (ER, American Dad and Band of Brothers), Kevin Durand (Lost, Wolverine) and Size2shoes. Also included is Samantha Barks who is playing Eponine in the upcoming Les Miserables movie. Javert and Eponine? Two of my favorites in one place? Really?!?! 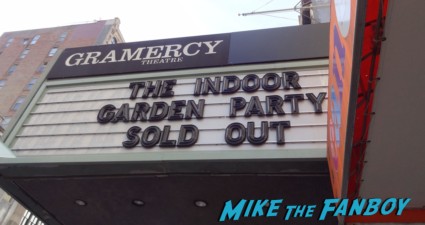 By the time I figured out I would be in town for the concert, it was sold out. (Of course!). But that didn’t stop me from trying to get my Les Miserable film poster signed!

I head out with my sister and Big Apple Elisa and we decide to try before the show. It’s a one night only so after the show will likely be nuts. The problem is, we have no idea when they might come in. We get to the theatre early and just hang out. And hang out…

We watch various trees and shrubs arrive (it is a garden party), but no musicians! Later in the afternoon, we see a couple of autograph pros arrive, but they seem to be waiting on the corner, rather than in front of the theater where we are.

Time passes and Big Apple Elisa’s friend and new MtF reader Dan joins us by the theater. We’re all armed with our Les Miserables posters and are passing time until I see a transport van pull up. The pros run from the corner and suddenly form a blockade so that we can’t see who is getting out!

I manage to walk around them and see two women get out – the second one is Samantha Barks! Ah! I head towards her and run into the pro autograph hound brigade who are watching Samantha head inside. Yikes! I run around them and manage to ask her for an autograph and she is kind enough to stop. Yeah!

Suddenly, our group of four people springs into action and Samantha is amused when Les Miserables one-sheets and mini-posters spring out. She smiles as she signs for us and poses for pictures. 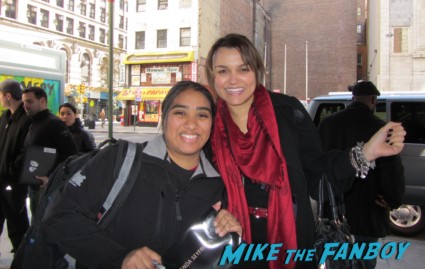 I tell her I am really glad she beat out Lea Michelle and Taylor Swift for the role of Eponine in the film and she laughs. 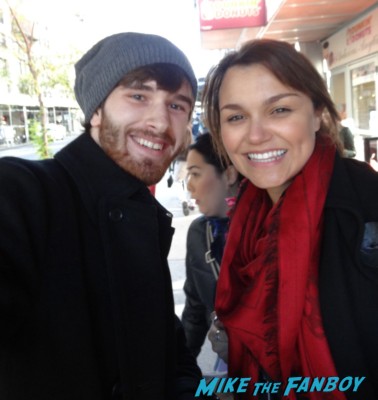 Meanwhile, the pros are baffled as to what’s going on since they only have printed pictures of Russell in Gladiator. One of them gets a picture with her, but they are not prepared for her. Boy will they kick themselves later!

Out of the corner of my eye, I can see Scott Grimes has also arrived, but we are concentrating so much on Samantha that Elisa can’t get the photo with Scott she wanted. Ah well! Scott does make eye contact with us and we smile. He nods and says “hi guys.” 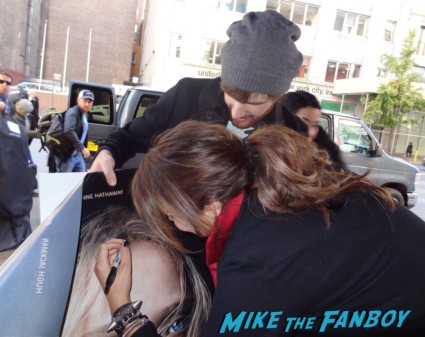 We settle in to wait a bit and see Kevin Durand go in. The pros spring after him, but they are on the wrong side and Kevin is in before they can reach him. As the pros go back to their position, they give us an accusing stink eye for not stopping him. How were we suppose to know they wanted him?

When it starts to get really late and Elisa wonders when Russell Crowe parachuted in (which is the only explanation for why we haven’t seen him yet), I see the pros start to move, but they are not chasing a car. I take a closer look and see that the pack of people rapidly moving toward us includes Russell Crowe!

Russell is in full Noah mode and is walking quickly, slightly wide-eyed, as he tries to out pace the pros who are following him. Never a good sign! Indeed, he brushes past us saying that he’s late. Drat! Well, he is late and the pack of people chasing him couldn’t have helped!

We put our stuff away and prepare to leave when we see Russell headed back towards us! He’s waiting for the door to unlock so he decided to come out and sign while he waits. Holy crap!

With the full Noah beard and without the Javert hat, he really looks more like Valjean than Javert. Russell is very approachable as the pros jump in, but calm down once Russell says “one each.” The pros, surprisingly, obey.

Once Russell gets to us, I tell him that I love when he tweets in character. He smiles, looks up and says: “thanks.” His tweets as Javert just made my day: 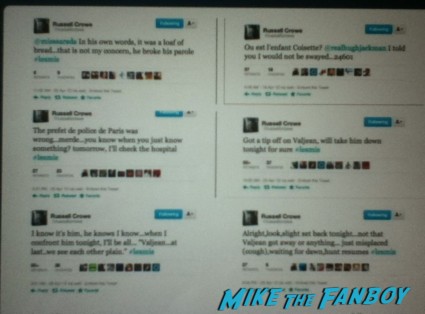 Dan gets his picture and the two have facial hair in common since Dan has been an extra on Noah – the Darren Aronofsky film that’s currently filming in town. 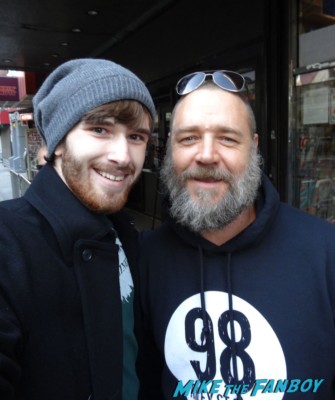 Russell finishes up and heads in and we call it a day! I’m amazed that he came back out to sign for us! So nice! 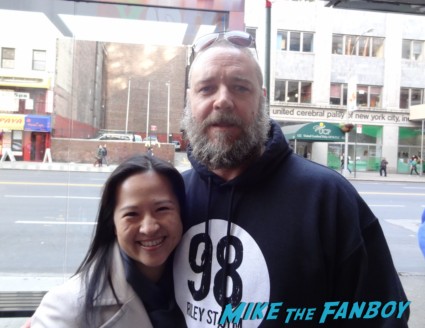 (Editor’s Note: Isn’t Erica simply adorable in this photo! I love how happy she is! M-)

Yeah! Two of my favorite characters for one of my most antcipated films this year! 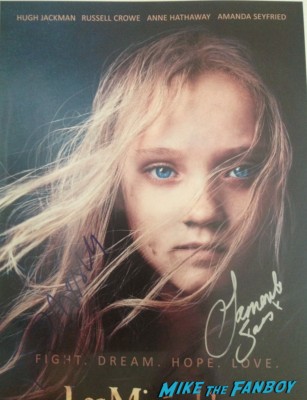