Erica is our resident Broadway girl. She loves her plays and she also loves her Harry Potter! So, it was a natural fit for her to check out Alan Rickman’s new play Seminar!

Erica has been working on getting her Harry Potter promo Tom Riddle’s Diary signed for years, and a glaring omission in her book was Mr. Alan Rickman! So, with a little luck she may get him to sign it…

Personally, I love me some Alan Rickman, and I met him ohhhh a couple years ago now. Hopefully, Erica will have the same luck as I did!

Check out her review and encounter with Alan Rickman after the jump! 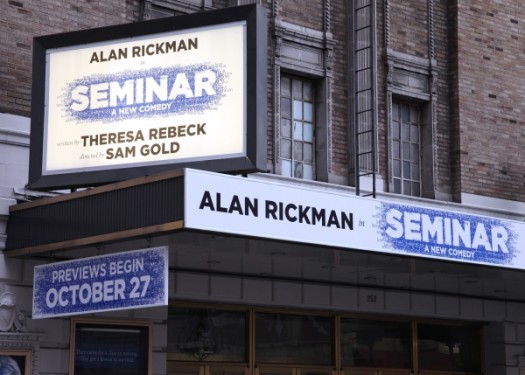 The story is focused on four writers who are taking a private writing seminar with a, well, persnickety writer/book editor played by Alan Rickman. With an unconventional approach to teaching (to say the least!), he helps the writers ultimately find their voice and/or the right platform to move forward. 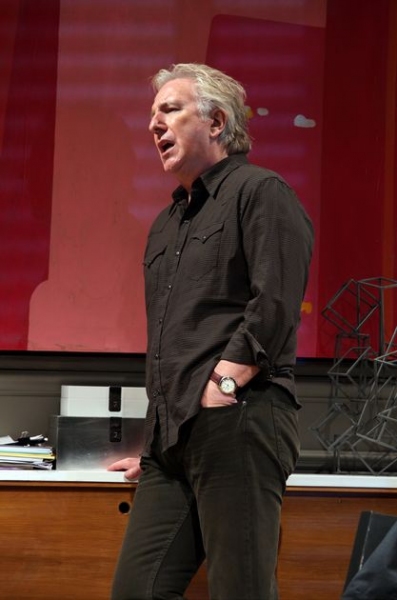 Much like Alan Rickman’s character, the play itself is quick and sharp with unexpected moments of emotion. Theresa Rebeck’s play is all about words. This is a playwright who loves language and it shows. 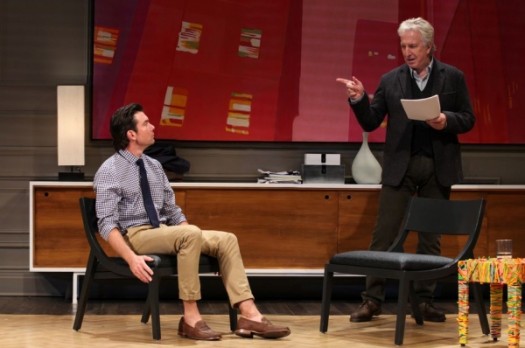 This is a fun play with a strong cast. Alan Rickman (Harry Potter, Die Hard, Sense and Sensibility) is wonderfully cast as the teacher. His first couple of scenes are filled with one-liners that only he can deliver. In the second to last scene, he has a terrific monologue that really explains why he took the role. Think of it as a cousin of sorts to Colonel Brandon’s story in the Sense and Sensibility movie. 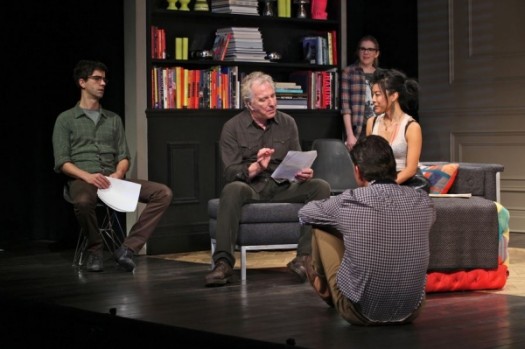 Lily Rabe (American Horror Story, Merchant of Venice – are those two different credits or what?!?!) is fresh and biting as one of his students. She is joined by Jerry O’Connell (Jerry Maguire, Stand By Me) who is comfortable on the stage as the pompous player. The other two students are well-played by Hamish Linklater and Hettienne Park. 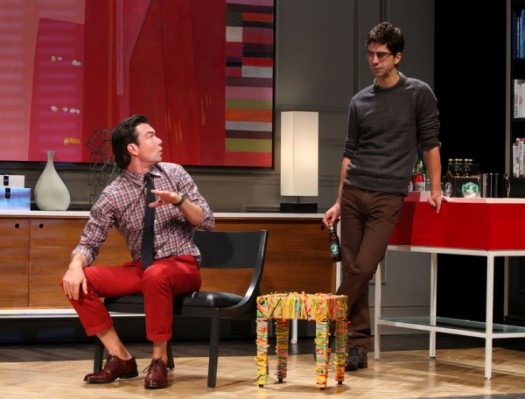 The crowd at the Seminar stage door is at least three times larger and a whole lot more energetic. It’s funny since the barricades are absolutely packed, but only every second person is getting something signed. Most are there just to see Alan Rickman up close. Imagine all these people waiting around with huge grins on their faces, just waiting to stand next to you. For the introverted Alan Rickman, I think this may be a bit unnerving!

Jerry O’Connell is the first out the door and is very personable. He is stopping to sign and take pictures with any and everyone. He doesn’t have a Sharpie with him so he keeps coming back to me to borrow my pen. The girl next to me has turned into a giggling pile of goo every time he comes over. However, Jerry takes it in stride very well. 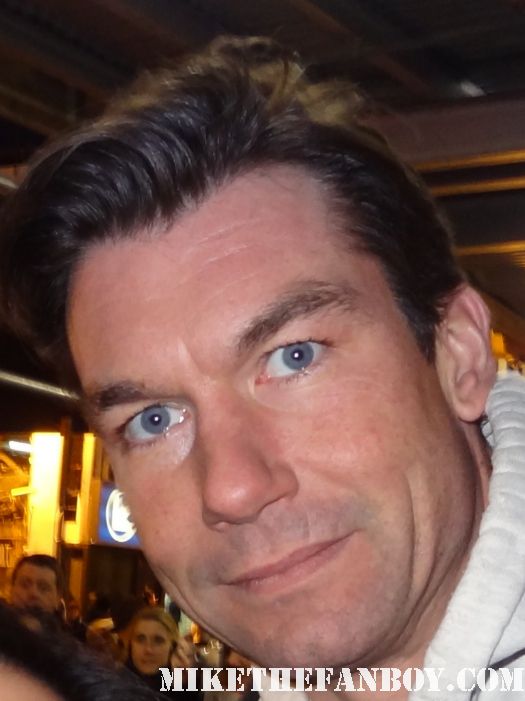 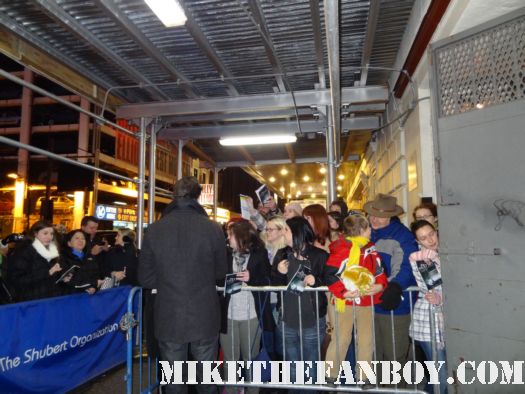 Hamish Linklater is out next and is quickly joined by Hettienne Park. Both of them are rather quiet, but quite amiable as the make their way through the crowd. 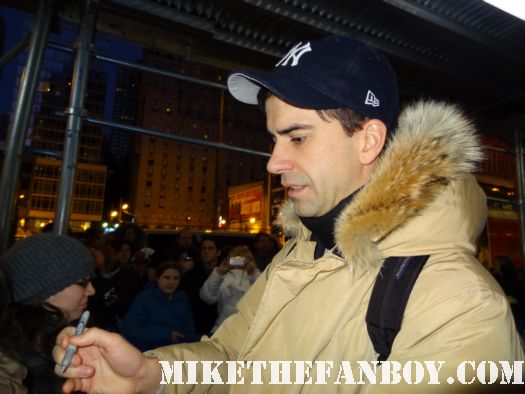 A green Eskimo walks out and Hamish helps to identify her as Lily Rabe. She has the fur-lined hood of her jacket up so tight I can barely make out lips and a nose. Despite the cold, she stops and signs and laughs when a bunch of folks yell out “American Horror Story rules!!”

Then there is a sudden burst of applause as Alan Rickman makes his appearance. Today he is Colonel Brandon with a soft smile on his face, not really talking to anyone. Security has announced that he will only sign Playbills. He starts on my side and signs my Playbill and moves on. 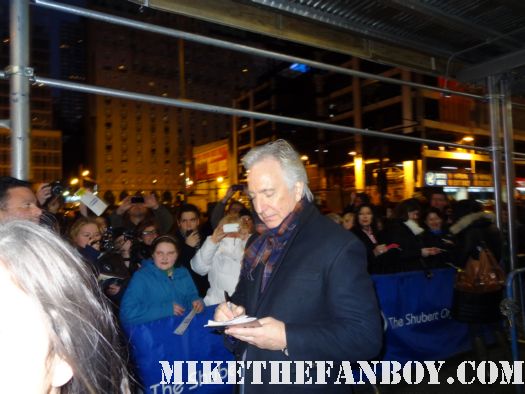 Ack! I have my Harry Potter promo – Tom Riddle’s diary that I’d love to have him sign!! I say very earnestly “Please Mr. Rickman, would you sign my notebook?”

He finishes with the people next to me, comes back to me (!!) and takes the diary out of my hand!!! He flips it over to check out the cover which is, thankfully, blank. He then signs it and hands it back me. YEAH!!!! 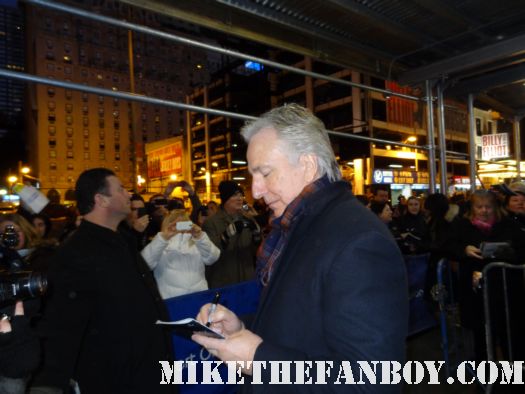 I respond with “Thank you so very much!!” and he turns back to me and gives me a huge smile. I’m stunned for a moment. A big smile from Alan Rickman!!!

He continues to make his way through the crowd, signing Playbills and giving his gentle smile. 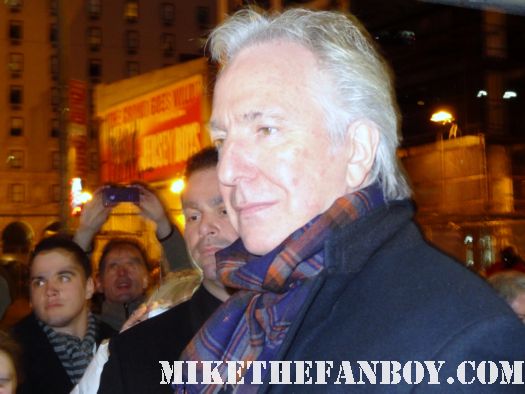 I didn’t see this, but a woman told me that he did stop to pose for a picture with a 7 year old boy. The girl who was next to him (who had been refused a picture) protested: “Why does he get a picture and I don’t!?!?”

To which Alan calmly replied: “Because he’s tiny.”

Seminar has extended its run (yeah!) so go and see it!