I know I know, I should have gone on Saturday to Wondercon. I wouldn’t have gotten sick, I would have seen Joss Whedon, blah blah blah… lol… It’s all good. I honestly still had a fun day with Suddenly Susan, Erica and her sister Linda.

Erica did have more fun on Saturday where she got some awesome swag (thanks again for hooking a fanboy up with those mini posters) saw some celebs and got some scoop!

You should never judge a con on its first day!

Unhappy with Friday at Wonder Con, Mike stayed home for the rest of the weekend and missed out on all the good fun. Like the Novel Strumpet, I was in the house for the Prometheus panel, but managed to take my camera and have a more detailed account of the day.

My sister and I head into the Twentieth Century Fox panel and was pleasantly surprised by mini 3D posters for Prometheus and Abraham Lincoln: Vampire Hunter. Woo hoo! 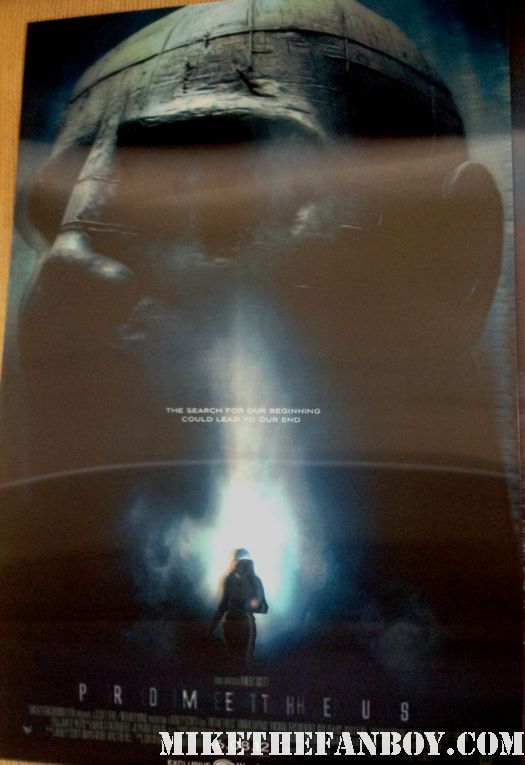 The posters looked really cool at the movie theater and now I get to take home my own little versions. Yeah! 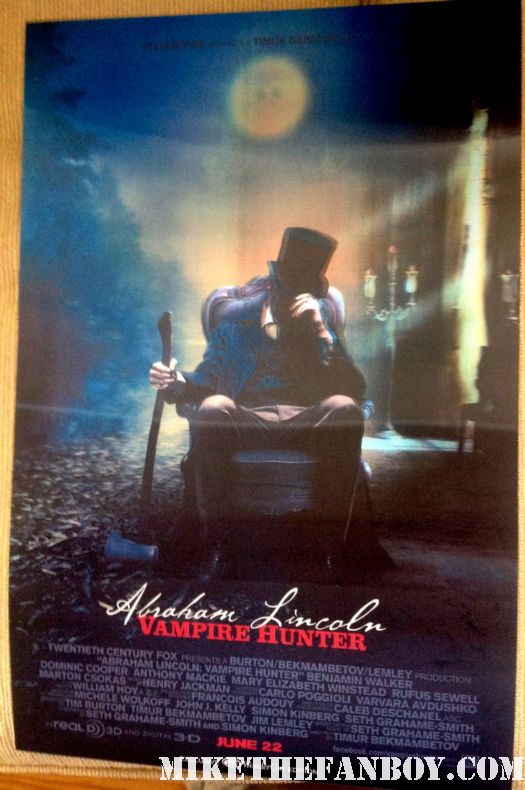 Fox also gave out opaque business cards for Weyland Corp. The cards direct you to the Weyland Corp website where they hint at the future to come, including some new robots they are making. I wonder if you can order your own Michael Fassbender. (Yes, I signed up, just in case…) 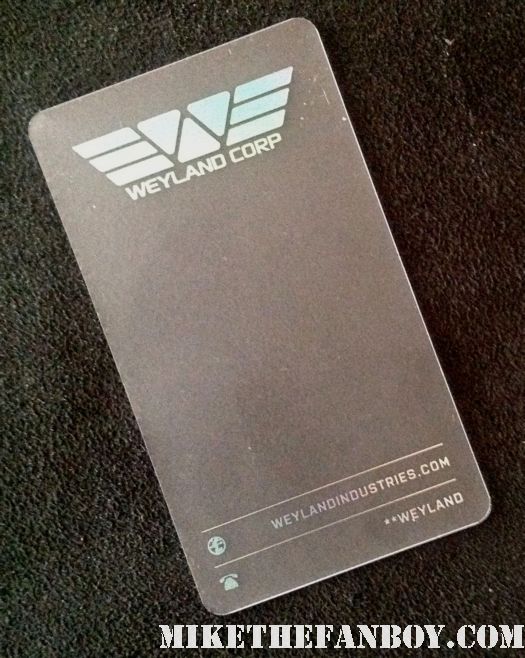 We sit through the panel for Fox Searchlight’s Sound of My Voice which looks a bit interesting, but the inarticulate responses from the writer/director came off as amateurish. When people are waiting for Sir Ridley, the bar is set pretty high so they didn’t make a great impression here. There is polite applause as they finish and exit the stage.

Then we move to the Twentieth Century Fox panel which was the main highlight for me. It begins with Abraham Lincoln: Vampire Hunter. Author and screenwriter Seth Grahame-Smith comes out and is comfortable and easy with the crowd. He starts off by saying he would normally be out in the audience watching these panels, but is thrilled to be on the stage. He introduces the train fight sequence clip which is pretty fast and furious with a axe/rifle contraption that needs a bit more context. This is clearly an action flick where the vampires do not sparkle.

Seth is then joined by director Timur Bekmambetov and the actor who plays Honest Abe, Benjamin Walker. Most of the questions are for Seth who talks about how he came up with this mash-up and what changes he made for the film (new characters mostly). Ben is game to join in the conversation and adds a bit of funny here and there. 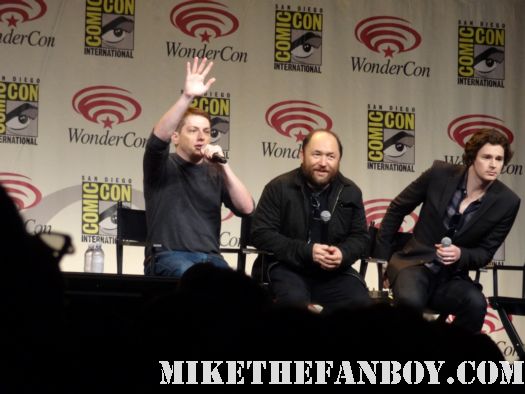 At the close of the panel, we get the first look at the 3D trailer. The main takeaway is that there is some history they are using as the backbone of the story, but certainly there will be some liberties taken (to say the least….!)

Next out is Damon Lindelof, looking rather bundled up on this chilly and wet day. He also is quite humble talking about how he remembers seeing Alien at the (inappropriate) age of 8 and being afraid to eat anything for fear that it would burst out of his stomach.

As Damon is relaying this, I glance at the sign language interpreter that WonderCon has thoughtfully provided. It was amusing to see the person sign “decapitation” during the Abraham Lincoln: Vampire Hunter panel. It was funner to see the guy make the sign for chest buster which is positioning your arm out with your elbow resting on your stomach, palm upward with your fingers wriggling. I wonder if that is the official ASL sign for that!

Damon brings out Sir Ridley who gets a standing ovation and they chat for a bit next to two empty chairs. Damon mentions they have some additional friends and we can only assume that they are Michael Fassbender and Charlize Theron who did a live chat this morning. Holy crap!

Sir Ridley mentions that the description of Prometheus as having the “DNA of Alien” is very appropriate and that he is hoping to do a second one since this movie leaves you with “some nice, big open questions.”

They head straight for the trailer which apparently leaked 12 hours earlier. Since Damon and Sir Ridley mention it several times, I think they are a bit peeved as it was supposed to debut here and at a Q&A they have coming up. By now I’m guessing everyone has seen it, but let me tell you, in 3D on the giant screens in a dark ballroom, it’s scary, creepy and thrilling. Definitely made in the same style as the original Alien.

Damon then brings out a stunning Charlize Theron and the ever-charming and oh-so-hot Michael Fassbender. This is the first time they’ve seen anything from the film and they seem quite happy with the new trailer. 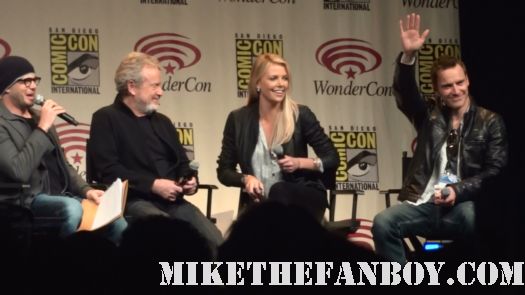 When asked about how they each first got involved with Prometheus, Charlize describes how she was in Malaysia and had to climb to a hill top in monsoon season to read the script under a tarp. She had two hours to decide and didn’t even finish the script, but said yes. Michael was at his flat in London when they delivered the script and also gave him 2 hours to decide. He didn’t finish the script either, but it was enticing enough and with Sir Ridley at the helm, he said yes.

Charlize and Michael seem quite chummy with each other and joke around a bit. I hear the live chat was similar in tone. 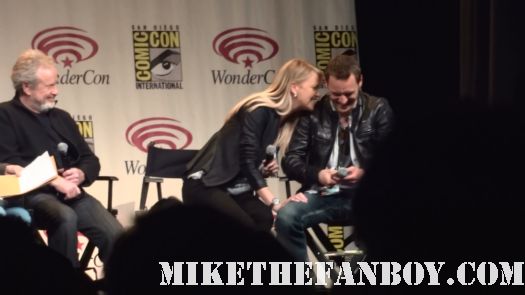 With all the secrecy about the project, Charlize joked about how she told family and friends that Prometheus was a “romantic comedy.” Damon laughed and started to riff on that by saying that Michael was just a “guy looking for a girl to say I love you.” Michael adds that his character is a “guy looking for love in all the wrong places.”

Yep. No wonder Michael commented that he had a lot of fun making this film! The whole Q&A was informative and a little silly. Very entertaining. Like all good panels should be! 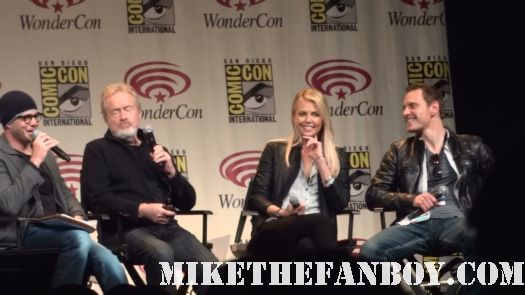 Sir Ridley gives props to Damon for the script and Damon promptly comments that people will then blame him if the movie sucks.

Sir Ridley then talks about the importance of casting. Charlize talks about how important the cast was on this and then adds how she means everyone, but Michael.

Michael then talks about his character, David, who is a cybernetic organism (or “robot” as Michael prefers to call him — I guess he really isn’t Bishop!) and also about his inspiration from Greg Louganis. (Seriously.) And then he talks about whether or not robots piss when Damon misinterprets some of Michael’s Brit speak. His answer was not so serious.

Damon asks Charlize and Michael to re-enact the the film. They both pause for a moment and then Charlize gives a mock scream and Michael calls out “Aliens everybody! Run!” (Note the hand on his face…)

With that less than accurate re-staging (we hope!), they show the trailer again and the four on the panel all walk to the side of the stage, put on their 3D glasses and also watch the trailer. Too cute!

Michael doesn’t even bat an eye (but he does sniff his hand) while Charlize starts to say “musk and chilies.” Michael nods in agreement. Damon chimes in that he was thinking “whiskey, vanilla, freshly mown grass and a hint of childhood pain…” Yep, serious journalism here!

After a few more random questions, the panel wraps up with the audience quite happy with the new trailer and the lively and interesting conversation today.

So I would have loved to have stayed and watch some of the other panels, but, alas, I have a date with a wristband signing! My sister and I were lucky enough to secure wristbands for the Battleship signing. I realize that this film is more likely to be Transformers 2 than Citizen Kane, but this is the most high-profile signing of the day since there were no signings for Prometheus, Abraham Lincoln: Vampire Hunter, The Amazing Spider-Man or Snow White and the Huntsman. (Sniff!)

While the Battleship panel featured Peter Berg, Alexander Skarsgard and Brooklyn Decker, Alexander is not expected at the signing. Disappointing and surprising since he is great with fans. Sigh!

We get into line and just before the signing is about to begin, someone says “we need another chair.” Yeah! That means Alexander is joining!

Sure enough, Peter, Brooklyn and Alexander arrive and settle in to meet the crowd. Alexander is in a shirt and jacket and New Balance sneakers. He is his normal chatty and beautiful self while Brooklyn is silent and Peter has a nice “thanks for coming” for coming for each person. 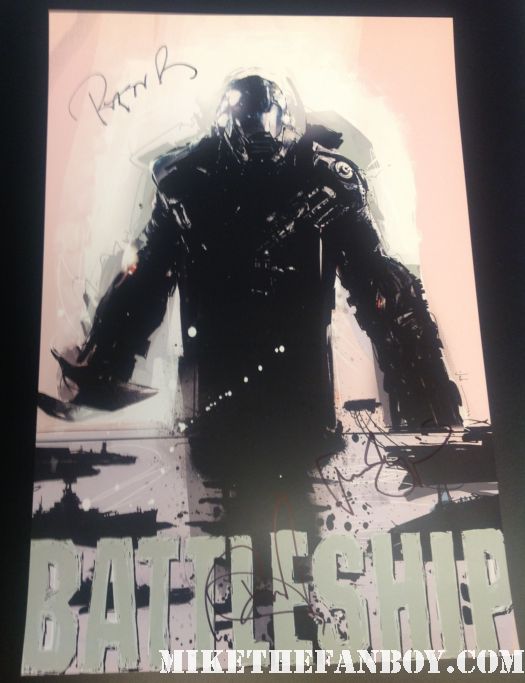 Since the line to get into the remaining panels is incredibly long, this concludes my second day of Wonder Con. Any day you get interesting peeks/discussion of intriguing films is a good day. Throw in Michael Fassbender and a quick moment with Alexander Skarsgard, and I think you can say the day didn’t suck!