Hey kids!
I know it’s been forever since we heard from The Novel Strumpet! But she has returned from her self imposed hiatus to send in this awesome review for Etiquette and Espionage by Gail Carriger!

Airships, Vampires, werewolfs… I mean… You can’t go wrong with that! Right? Right?

Mix that in with a dash of manners and you have the recipe for a book I would like!

Let’s see…a girl’s finishing school on an airship, a vampire and werewolf for professors, mechanimals, flywaymen, espionage, comestibles, fashion…it must be a Gail Carriger book!

Etiquette and Espionage is the first in a new series by the author of the Parasol Protectorate and while the book is gobs of fun on it’s own, the fact that there are some familiar faces makes it even more delicious.

The main plot follows Sophronia Temminnick, a 14 year old who is more interested in figuring out how things work than in being a lady. Her mother, at the urging of a family “friend”, decides to send Sophronia to ‘Mademoiselle Geraldine’s Finishing Academy for Young Ladies of Quality’. Sophronia is quite unhappy with the decision, until she learns this is no ordinary finishing school. Along with her classes on proper ladylike decorum, she will be taught the arts of deception and espionage. Needless to say she takes to the latter lessons rather well. 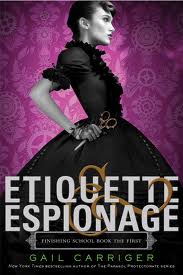 On top of trying to learn her lessons, there is a certain mystery Sophronia is quite intrigued by. Namely, a certain prototype that her school nemesis has hidden and that Sophronia is determined to discover. Her new adventure takes her from her modest home, to the wild moors, an evil genius school for boys, flying airships and a boiler room.

There is a myriad of interesting characters she meets along the way, some new and some very familiar (but I won’t give those away, it’s too much fun running into them). They all help to keep the whit, whimsy and quirkiness we’ve come to expect from a Carriger novel.

There are also some things that are very familiar, such as the dynamic between Sophronia and her new friend Dimity – very Alexia and Ivy.

In fact I’m putting my bets on Dimity either being Alexia or Ivy’s mother. Her coloring leads me toward Alexia’s, but her questionable dress choices lead me to Ivy’s. However, I could easily see one of Sophronia’s sisters being Alexia’s mother as well. Hmmm…time will tell. Where was I? Oh yes….

Familiar elements – menacing mechanicals, flying airships, a host of offbeat characters, a female character with a healthy appetite – but instead of coming off as “Oh, this again.” I found myself thinking “Oh goodie! This again!” And they are quite a few differences since this world is before that of Alexia and company.

Overall it is not a disappointing read and I would suggest it to anyone who is a fan of the Parasol Protectorate, YA Paranormal, Steampunk, Alternate History, or anyone who just likes a fun read.

I got this book as an ARC during Comic Con 2012. I was thrilled when it landed in my eager little hands. Thanks to Little, Brown Books for Young Readers and Gail Carriger!