What’s up autograph fanatics! Ace here with my recap of the Eurotrip 10th Anniversary Screening and Q & A.

Now, I must admit, there is just some graphing days where you just pray that the next adventure replicates itself. An overwhelming feeling of adrenaline plagues your body where you feel successful for your graphing conquests.

A month before the screening took place, I told my buddy Chris that Eurotrip was having its Tenth Anniversary screening with the cast and crew.  I knew he would go up in arms as it is his favorite movie, and without hesitation he told me to jump on the tickets when I had the chance. I honestly didn’t want to go. I was afraid I would not like the movie…

Regardless, the midnight the tickets were released, I grabbed three tickets…front row seating…

Fast forward to the day of the event with anxious looks on our faces and three different mini-posters within my grasp… I think Chris had like mini-posters, lobby cards, press photos…the works… If the company released it, he printed it…

We walk into the theatre and I head to the counter… As I am messing with the tickets, a few of the actors walk in… Of course, I look back and they are already signing away… I run over to get Scott Mechlowicz on one of the mini-posters before I head back to fiddle with the tickets.

We head down to the basement and head inside the movie theatre to grab our seats. After sitting down for less than five minutes, we realized that if we wait in the lobby, there would be a few actors floating in before show time. 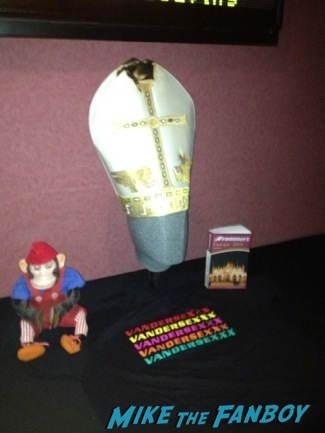 Luckily, Steve Hytner was talking to a few of his fellow cast in the lobby. As soon as he was done, he signed our posters. He was super nice… He plays the green absinthe fairy in the film, but maybe you remember him as Kenny Bania in Seinfeld…

Travis Wester was the next to walk in… Super cool… Signed everything. People were approaching with shirts, DVDs, photos, posters…. He signed them all.

As the movie approached, everyone evacuated the lobby and gravitated towards their seats. The movie played, finished, and I honestly fell in love with it instantly. It was funny and silly, but not to the point where you lose interest, or don’t take it seriously, or get annoyed with stupidity. It was perfect. Go watch it! It’s on YouTube… you don’t even have to buy it!
Kevin Smith walked in the room to moderate the Q & A… As always, he is great about facilitating conversation. 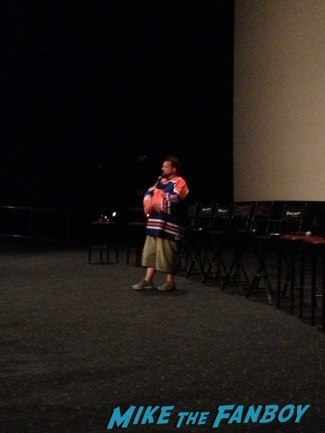 He introduced the directors, the main cast, and the characters actors that make the film so special. 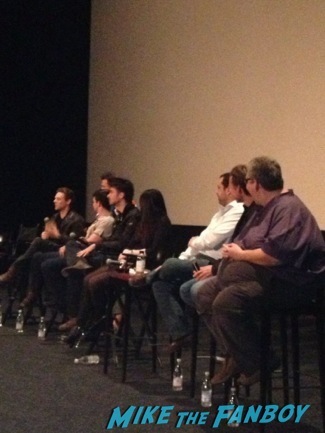 The directors talked about how DreamWorks had no faith in the film… Michelle Trachtenberg talked about the great offers she declined to take off her shirt and the overbearing amount of genitalia on set… We learned about deleted scenes… production mishaps…and Jacob Pitts fear talking to large crowds…. 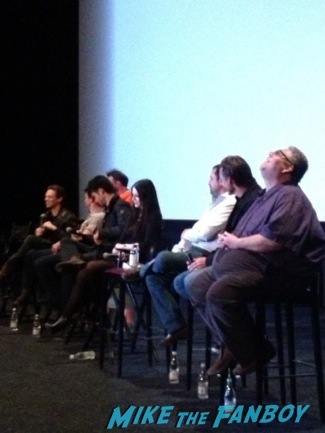 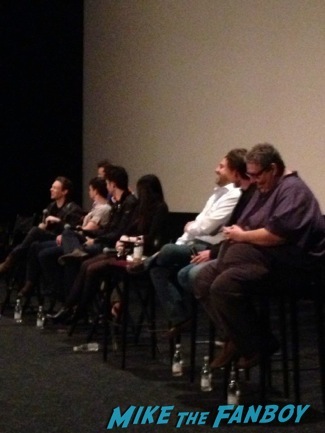 When the Q & A ended, Kevin Smith bolted as he was late to record the five podcasts he postponed and the cast mingled with fans.

Jeff Schaffer, Alec Berg, and David Mandel quickly signed all our posters as Michelle was talking to one of her cast mates. They had probably never signed autographs before as they kept saying to us, we should leave room for the stars. They were super cool and humble.

Michelle Trachtenberg was the next person we asked… She signed a few before she had to go. I luckily got her on two of my main cast posters… Unfortunately, I only have one left for her to complete…hopefully, within time…

Jacob Pitts was super cool as always… signed and signed away…. He took photos with everybody and anybody that wanted one.

Molly Schade was super sweet and signed our posters… She was a great part to the movie so it’s neat when you can add some of the smaller character actors.

The last signer of the night was J.P. Manoux. He plays the robot mime man in the film. He has been a character actor in a ton of things, and his role in the film was hilarious! He kindly signed all my posters!


Sadly, We missed the band, Lustra, who wrote the Scotty Doesn’t Know song in the film.

Sure enough… a mood changer…

A security guard within the theatre went on attack mode and approached us… The normal, “You can’t do that here” nonsense. As if we were selling drugs or something. He didn’t realize he was reprimanding one of the cast members that was invited by the theatre… Apparently, “it doesn’t matter” if you paid to go see the movie, your rights to have a conversation are revoked… With that, we walked to the car shortly after…

Regardless, it was an amazing event and the cast was cool as could be.


If you have questions, concerns, Ideas… Add me on Facebook!