The one thing about SDCC is you never know who will be doing what, and where. It’s strange. No one knows anything, especially the people running the events. I call that odd, but hey when in Rome.

Susan found one such event when she heard that Evangeline Lilly was doing some signings for her book at SDCC. One signing was last minute and Susan jumped at the chance to meet her!

The adorable, the talented, the lovely Miss Evangeline Lilly – who would pass up a chance to meet her? I’ve met her once before actually and she was very fan friendly. I knew that she would be doing several signings at Comic Con to promote her new children’s book. I really needed her to finish my Real Steel poster, so I dragged it with me for several days amid the madness of the convention floor.

As luck would have it, and by luck, I mean the bad kind, every signing where she was doing items other than her book were capped as quickly as you could say the word. The signings I was able to make in time were strictly for the book only.

On Sunday, our last day of the quest, another signing popped up. I checked with one of the booth workers and he told me she was signing anything – no purchase necessary. Great. When I asked when we could start lining up, he said, now if you want, as if puzzled. Also great. I was first in line with 90 minutes before the signing. I’ve never been first in line at Comic Con and that should have been my first clue.

The lovely Erica and her sister joined me in line and when it was close to show time they informed us Miss Lilly would be signing the book only for a $35 fee. Erica and her sis said farewell and I contemplated for a few minutes. The fact that I could actually stay sitting comfortably on the floor was a big plus. They had been absolutely militant this year about no sitting or standing anywhere on the floor (unless in line and then we could stand), so ergo, no resting your feet for four days straight. This booth was tucked away and I was able to stay sitting. This may sound nuts, but it was worth the $35 just for that!

I purchased a book, which turned out to be a limited edition of 1,000 and mine was number 70 – nice!! It’s a beautiful book and the story is creative and fun. I’d definitely recommend it for those who have little ones. Another bonus was that we could take a photo with Miss Lilly.

She arrived on time, but then quickly trotted past saying “sorry, I have to pee”. She returned and got right down to business. Someone had come by to ask our name and out it on a post it on the inside 2nd page. We were ready to go and I was on deck first. I said hello, told her I loved her on Lost (original, I know) and she said thank you, signed it, and said, “I hope you enjoy it”. One of the fellows at the booth was nice enough to take the photo for me. 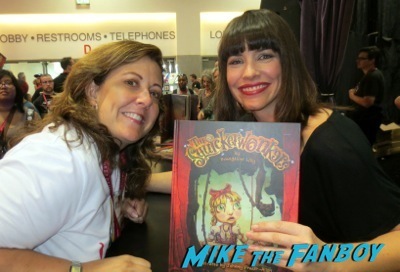 For $35, this was a lovely item from a lovely lady, so money well spent in my book! 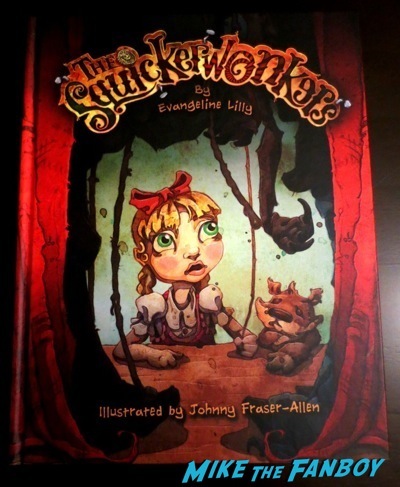