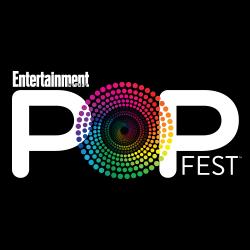 After the Outlander panel was the one I was most excited for the whole day. Big fan of both American Horror Story and Scream Queens. I think Ryan Murphy is one of the most creative minds in television today and the guy is contributing huge to the proclaimed Golden Age of TV we are in. But I will hush up and bring you what EW’s own Moderator Tim Stack had them talk about.

First off let’s talk about Scream Queens. Now in its second season but the show is out of the sorority house and in a mental hospital. But why the different location? “We didn’t completely reinvent it. We kept the same characters and I think that’s what we’re going to keep doing every year with it. If you want people to show up you have to give them something new and reinvigorate it,” Murphy stated.

“I think we would’ve been bored back in the sorority, Curtis added.” The audience wants a reinvention every year now. And they have come to expect it.”

Speaking of reinvention Lea Michele who has already shown she’s a crazy killer in the previous season got to embody a whole different one this time. “When Ryan told me what this season would be about, he told me it was very a la Silence of the Lambs,” she said. “I love horror films and it is one of my favorites. For a couple of the scenes, we watched the movie and sort of recreated frame-by-frame, which I thought was awesome.”

Not to let Lea get all the fun the Halloween episode had some standout performances. Like Abigial Breslin dressing up like Ivana Trump. “She has patented hysteria and mental illness and good writing in a way that I think has so become signature Abigail Breslin that she may never be able to do anything else again,” Curtis commented. 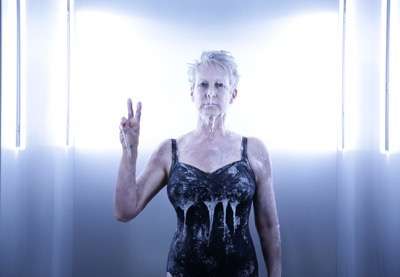 Okay now we’ll leave the big drama queens behind and move on to the creepy and the freaky. Mr. Ryan Murphy what were your thoughts going into this new season of AHS? “I ended Season 5 (Hotel) feeling two things which was we did “that” formula which is to do an opera and to do everything very overstylized. The episodes very big and theatrical so I felt the best thing we could do was so the opposite of that. We (FX chief John Langraf) felt that after Thanksgiving (we) didn’t want to watch something that gory. So we decided to cut it to 10 episodes and start it right after Labor Day. We went for leaner and meaner. The episodes are short(er) by design.” Cuba Gooding Jr. is the new guy to the AHS family with this being his first season on the show.

What has the experience been like? ”The writing we get now is so spoiling and rich with the characterization. And some of the scariest shit I’ve ever done.” Welcome to the family Cuba! You’re doing an awesome job but I’m sure having tons of sex with Lady Gaga on the show makes the gig all worth it. “We kept the actors and their real life counterparts apart,” Murphy explains. “Lily(Rabe) and Sarah (Paulson) had no interaction. They didn’t really know how each other were playing it.”

When a previously submitted audience question is asked of Emma if she would ever come back to AHS? “I would love to! This season of Horror Story is one of my favorites. I would follow Ryan anywhere. He does the best shows.” Best answer! C’mon Ryan! You run both shows. Let her schedule make it happen.

And then the big announcement of the panel came. Have to love Murphy for always dropping the big news unexpectedly. “It’s not going to be next season but we’re going to do a season that’s a crossover between Murder House and Coven together. Not next year because it takes too long to plan. I’ve started going to the actors from both of the seasons and saying there is a window if you can fit us in.” Oh…..Hell yes! The two best seasons combining together! This should be some epic fun and () chaos! 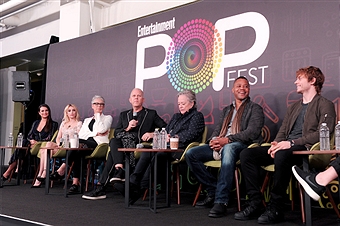 ”We’re shooting it next year, two seasons of Crime Story (Katrina & Versace) both at the same time with two different groups of people,” Murphy begins. “I was always very moved and freaked out by the Versace assassination and I thought it was a really great story for Crime Story because it’s a manhunt season. The tragedy of the Versace murder was it should not have happened he should have been caught by then but he wasn’t because he was targeting gay people.” Double down! That sounds like a whole lot of couch potato goodness. And to put an different artistic side to it Murphy has come up with a new hiring program for his company. “Look at our business only 15% of episodic television is directed by women. That’s bullshit. So I decided that (starting in January of this year) 50% of all of the slots on all of my shows would be women.” 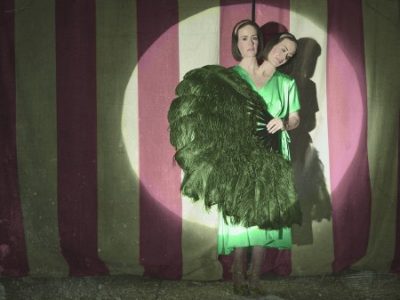 So glad I made it to this panel. It was everything I was hoping for. It’s always rewarding to go to a panel and actually get something out of it instead of a bunch of continuous ‘I can’t talk about that,’ or ‘well you’ll have to wait and see.’ Thanks Ryan Murphy and Co.!