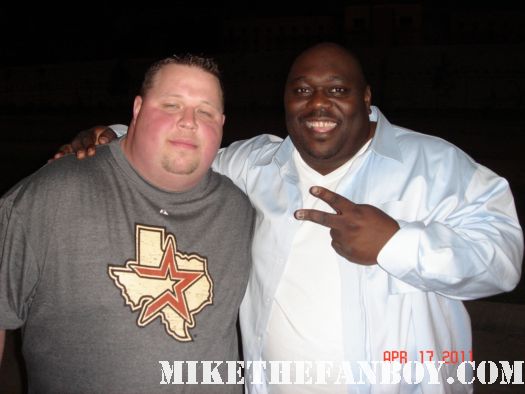 Our man on the streets of Texas is back in action! This time Chuck is after famed character actor Faizon Love. Faizon Love as you might remember was in Life As We Know it, Who’s Your Caddy?, and more.

But I have one question… Chuck were you drunk in this picture? lol… Kidding… Kidding!!

Take a look at Chuck’s full report after the jump! Congrats my man!

I got to the club around 9pm and waited out back. The security here are a bunch of buffoons and always lie to us and say the people are not signing…blah, blah, blah. So I ignored them as usual.

Around 11:40pm Faizon Love came out to leave and I asked him to sign my poster and DVD. He asked me if I had been back there for a long time waiting on him. I told him I had been waiting for several hours and what the security had done, and he apologized to me. He told me if he had known I was back there he would have invited me inside. He then signed my poster and DVD and told me he really liked the poster. We talked for a few more minutes about his movies and another one he has coming out soon.

Faizon Love was great to meet and took the time to prove he cares about his fans.

I am really tired in this pic, so no comments asking if I was drunk…lol!