Overall, I had a fantastic New York Comic Con and the con is generally well-run. I really can’t complain, except…well…I debated whether or not this counts as a Fanboy Fail since, well, read on and then you can be the judge.

Warner Bros. visited New York Comic Con with a slew of TV shows this year. While they have been a regular at NYCC, they haven’t had any signings since DC Comics (a WB company) held them at their booth a few years ago. So it was a pleasant surprise that Warner Bros. brought a slew of shows AND they would have a signing for each. A very short, half-hour signing in the general autograph hall on Sunday, but a signing nonetheless. Yeah!

However, they had no details on how to get into any of the signings and any experienced con goer knows that they were be some process involved. Late Saturday night, the official NYCC Twitter account tweeted out a message about the wristband distribution:

Easy enough, right? So we got up at the crack of dawn to get into the queue line so we could be among the first at table 1. That was the theory anyway.

We got into the queue line and then waited until the appointed time when they would set us free. My group included my 2 sisters, Elisa in the Big Apple and another friend. When they opened house, a huge chuck of the line headed in the same direction towards table 1 so we basically all kept in our order, walking briskly, but not doing anything stupid like running. You know where this is going, right?

Some people further back didn’t like that and proceeded to run past us and jump the line. Then basically all hell broke loose. Lots of additional pushing, line jumping and running so that the single-file waiting pen in front of table 1 suddenly had maybe 400 to 600 people trying to get in at the same time. Doh! 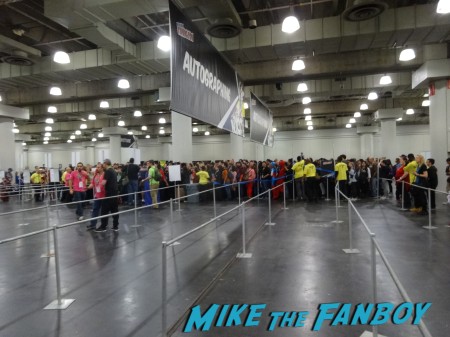 Barricades fell over, signs fell over, people fell over. EMTs came to look at someone who fell. They had to stop the line at the bottleneck point. 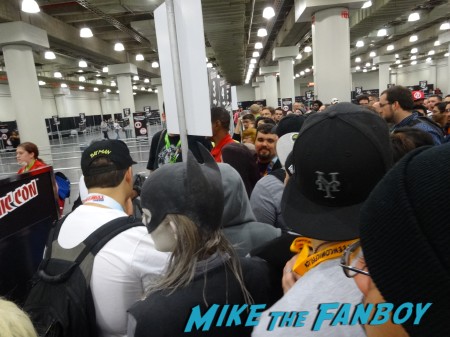 If you look in this picture, you can see the line is about 10 people wide and it goes down the width of the convention center.

At this point, additional security came over and they pulled out anyone with a medical badge who needed special assistance. While many medial badges are legit, if you made it to the front of this scrum, I think you’re pretty spry. So the line halted and they distributed wristbands to every medical badge. When the medical badges were taken care of, security opened up the main line and slowly let people in.

Keep in mind we started out altogether, but my group ended up scattered to the winds. One friend was one of the first dozen in line, my sister and I were maybe number 60 in line, Elisa in the Big Apple was about 10 people behind us and my other sister got shut out of wristbands. That’s how crazy the scrum was. 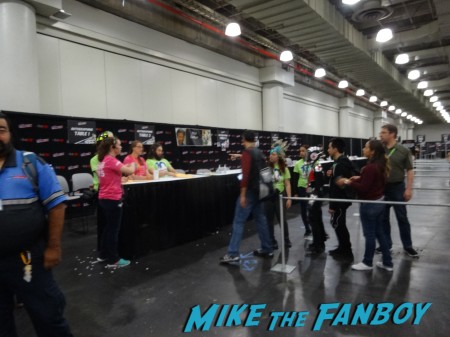 But I was fortunate that I even got a wristband, I know that. The shows that were signing that day included: Gotham, DC’s Legends of Tomorrow, Gotham, Supergirl, Blindspot and Person of Interest. My preference would have been Legends of Tomorrow, but that was already gone along with Gotham. Elisa later reported to me that the Gotham and Legends of Tomorrow line were basically all medical badges since they got their wristbands first. Also, she saw most of them had 2 and even three wristbands. So much for one per person. There has to be a better way of handling this so the distribution is fair and without casualties.

I heard a story of a woman who was injured the day before. She was walking around and some oblivious dude with one of those plastic poster protectors whipped around and the protector cut her throat. Literally. Seven stitches. I saw her in the signing lines with a large bandage on her throat. Her throat was cut and she still faced the signing mob the next day.

Anyway, back to the WB signing wristband fiasco. By the time I got to the head of the line, I had to pick another show so I selected Supergirl, since the show has promise and I liked Melissa Benoist. (I’ll have a review of the pilot on Monday.) This was the one WB show that didn’t list who was coming for the panel, but I figured that they’d have Supergirl, right? You know where this is going, right?

The Supergirl signing started very promptly and they had a cool a new poster exclusive for this signing. It features the six main cast members, of which, only one 1 was present and it wasn’t Supergirl. No Melissa Benoist. That’s right. No Supergirl for the Supergirl signing. Yes, this probably sounds a little greedy, but after getting in early and surviving the mob, it’s disappointing. 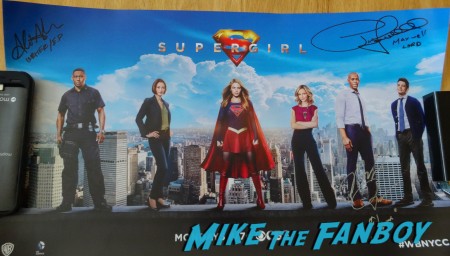 No pictures were allowed at the signing (hence the only pictures I have are the wristband mob), but Mehcad Brooks and Peter Facinelli were friendly. The third signature in the upper left corner belongs to Ali Adler, the show’s writer. She was disinterested in the fans, avoided eye contact and wanted to just talk to the actors.

Um, so, Ms. Adler, you’re here to sell the show so perhaps you can lower yourself and be nice to the people who may (or may not) watch your show for the 30 minute signing. Just a thought. Thanks for letting me exist!

Per the original announcements, neither Wentworth Miller nor Dominic Purcell were there for Legends of Tomorrow and Gotham only had half the cast. Another unpleasant surprise for those who scored Blindspot wristbands, Jaimie Alexander cancelled.

So that was the WB signing disaster and that was my Supergirl signing – the one big blight on my NYCC experience this year. I’m glad the WB decided to do signings, but there needs to be a better way to control the distribution.

Otherwise I had a great time and I still have lots of NYCC news and stories to share.