Susan loves Russell Crowe… LOVES HIM! When she saw he was doing a rare q and a, thanks to a certain tall gorgeously attractive Canadian Fanboy named Mike. She, along with Awesome Anushika got to see Russell’s new film, The Water Diviner and a q and a with the man himself.

I had to cancel at the last minute, but I was able to meet Russell on the way out, which was awesome.

Susan… She didn’t fair as well as I did… DOH!

Like Mike said, I love my Aussie men and there’s none I love more than Russell Crowe. I jumped at the chance to attend an advanced screening of The Water Diviner and Q&A with the Gladiator himself. Anushika came along for the ride. We got there so early, there was time to go to a nearby pub and grab a snack and some coffee and tea. Her eagle eye spotted Will Ferrell sitting just a few tables away. It was so randomly awesome. He was wearing a red jogging suit like very character he’s ever played – too funny!

We headed back and were still first in line. Finally people started to arrive and check-in began. We grabbed two seats front and center. This is Russell’s directorial debut and the movie was amazing. I’m not just saying that because I’m a big fan, I mean, A Good Year – really Russell? 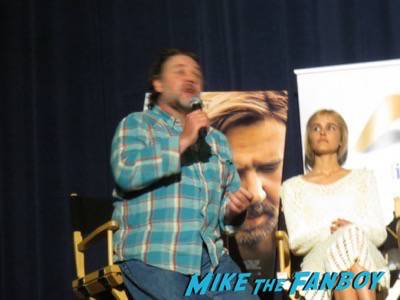 In addition to Russell there were ten other cast members. Less than 10 minutes into it, Russell decides he wants to get questions from the audience. The crowd was being shy, so he got off stage and walked through the theatre. 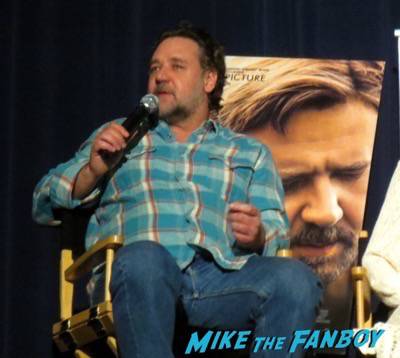 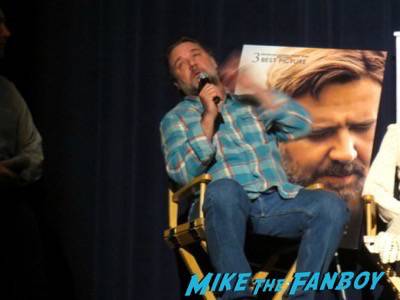 That got the group going. He would sit nearby whoever had asked a question. By the third one, he was in the back row of the theater and sat next to a woman who asked a complete unoriginal and boring question: tell us a funny story from the set and what you learned from the experience. When asked who she wanted to respond, she answered, all of them. For the next 40 minutes the answers dragged on while Russell sat in the back row, behind us, where we couldn’t even see him. Why does that never happen to me when I arrive late to an event? 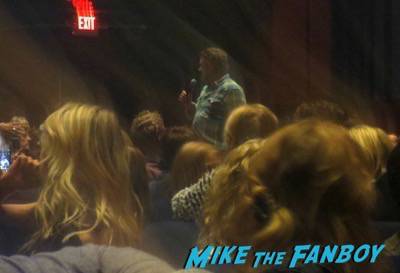 The Q&A ended after that painstaking debacle and the audience got right up and headed to the reception. I wasn’t too surprised as this was more of an industry event versus a fan event. Shika and I waited patiently with one other looky Lou while Russell posed for official event photos.

Before we knew what happened, he BOLTED off stage. Either his pants were on fire or he had an acute case of diarrhea. We were both in shock and had that “what just happened” face. To be fair, I am 99% sure he never even saw us. We also weren’t aggressive nor called his name, but I don’t think he would have stopped anyway.

We mingled for a few minutes at the reception, hoping he might pop in, but turns out he was busy signing autographs outside for people in the parking lot. That’s one thing that gives me the red ass – time and time again these actors bolt from the real fans who paid for a ticket and sign for the (mostly) dealers outside. Sigh.

I’ve been lucky enough to meet Russell a few times and he’s always been super nice. I was more bummed for Shika, as she’s never met him. Plus, I didn’t even get to oogle his sexiness on stage. Maybe next time Rusty.